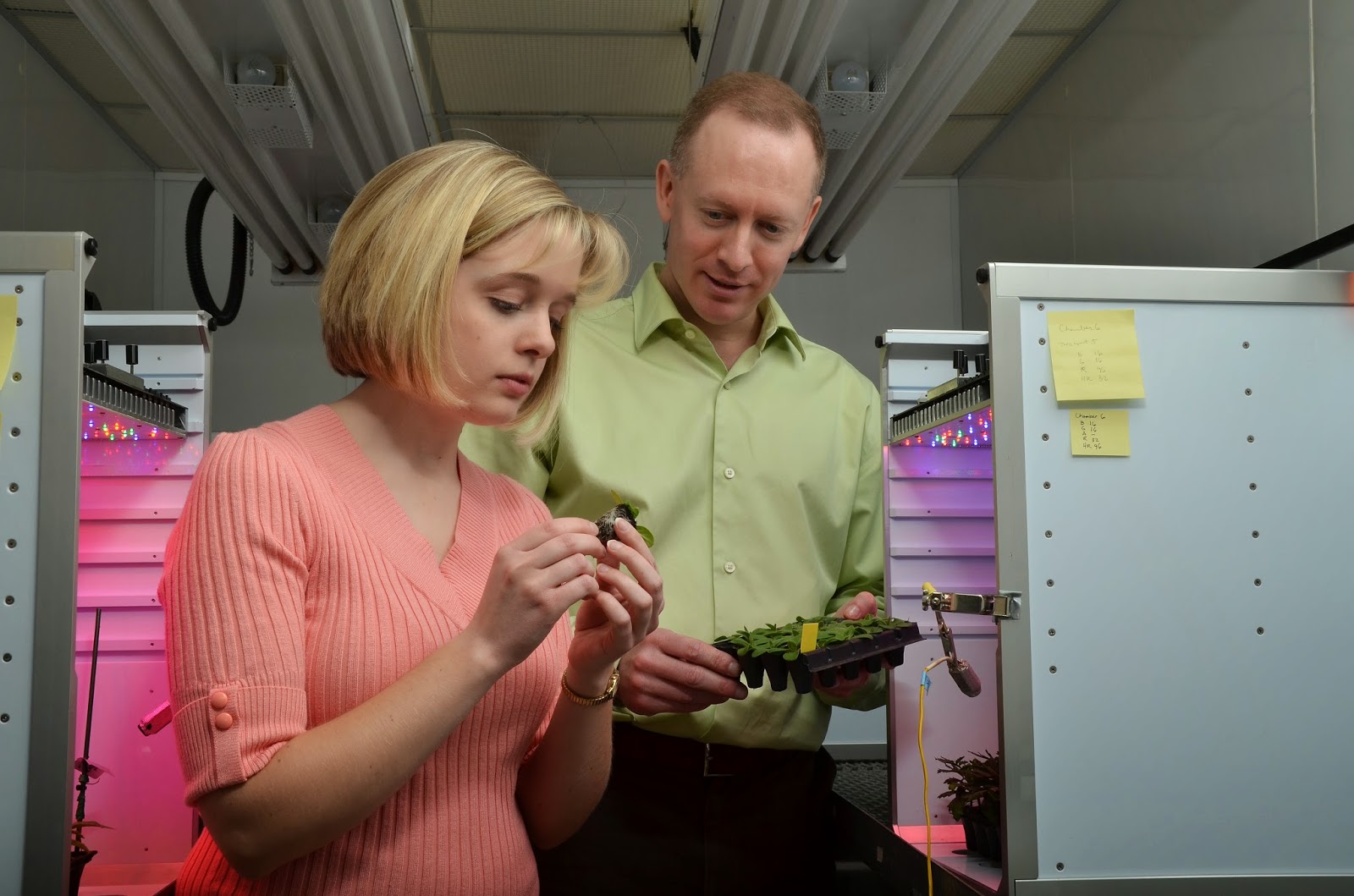 By David Kuack
Growers and researchers are studying the effects that specific light wavelengths can have on ornamental and edible crops. Research studies are focusing on the effect light wavelengths can have on a variety of plant processes including growth, flowering, fruiting and postharvest quality.
Michigan State University horticulture professor Erik Runkle and former graduate student, now floriculture/nursery production extension educator Heidi Wollaeger studied the impact the ratio of red to blue light can have on the production of annual bedding plant seedlings. They looked at the effects of red and blue light on impatiens, petunia, salvia and tomato plugs.

“These four species are very common bedding plants for U.S. growers,” said Wollaeger. “They are key crops for their sales. The tomato plugs were being grown as vegetable transplants and not for production as greenhouse tomatoes for fruiting.

“We have also used these four species in other lighting trials that we have done recently. We wanted to be able to extrapolate from one study to another. In previous studies we looked at green light and the ratios of blue, green and red light.”
Seed was sown into 128-cell plug trays at a commercial propagator and moved into a large growth chamber at the university within two days where LED and fluorescent light treatments began immediately. The plants were Stage 2 plugs when the light treatments began. The seedlings had cotyledons and no true leaves. They were under the light treatments throughout the entire duration of the study.
Light treatments

For all light treatments, plants were exposed to 160 micromoles per square meter per second (µmol·m−2·s–1) for 18 hours a day.

“We chose 10 moles per day because that is a suggested light integral for most plants to be of at least moderate quality,” Wollaeger said.
“We didn’t want to deliver a light intensity much greater because as the intensity increases so does the light installation cost as well as the energy costs to run the lamps. We were implementing a practical light level for growers.”

Wollaeger said the study was terminated after four to five weeks because at that time the plants were ready for a commercial grower to transplant.
“This study simulated what growers would actually do in their facilities if they were to install a sole light source LED chamber,” she said. “They would use this high value propagation space to produce the propagules and then transplant them and put them into the greenhouse. These could be used by growers who are finishing the plants themselves or by a propagator who is selling the plugs to other growers.”
Light effects on bedding plants

Wollaeger said all of the species grown under the red light dominant background with at least 10 µmol·m−2·s–1 of blue light displayed desirable plant growth responses.

“These plants showed compact growth, thicker leaves and thicker stems,” she said. “As a general rule of thumb, growers should provide at least 10 µmol·m−2·s–1 of blue light if they are providing
a red dominant environment to increase plant quality, which results in compact, well-branched growth.
“This treatment might reduce the need for plant growth retardants. If the light environment is being altered to include more blue light in a sole-source environment, stem elongation is reduced. This will depend on the crop. Every crop has a different vigor depending on the species and cultivar. This study only looked at four commercially important species.”

Plants grown under the fluorescent lamps usually produced the most chlorophyll, but also had the thinnest leaves. Impatiens and salvia had greater fresh shoot weight when exposed to treatments without blue light than with at least 80 µmol·m−2·s–1 of blue light.

Impatiens grown under a high proportion of blue light developed more flower buds. Wollaeger said whether this early flowering is a negative or positive effect depends on the plug cell size.
“If the plants are being grown in a small plug size like a 288 cell and will be transplanted into large finished containers, it might not be desirable for early bud development,” she said. “The formation of flower buds could impact the rooting of the plants, but that depends on the cell pack size. If a grower is transplanting the plugs directly into smaller containers, he might want earlier flowering.”
Reduction of tomato intumescences

A benefit of growing tomato plugs under high blue light levels and fluorescent lamps was the reduced incidence of leaf intumescences (sometimes called edema), which are small protrusions that form on leaves, stems and petioles. Wollaeger said this physiological disorder has been associated with a lack of ultraviolet light or blue light.

“This physiological disorder is cultivar specific,” she said. “Some cultivars are more prone to developing this disorder compared to others. ‘Early Girl’ is the cultivar that we used and it did develop intumescences under treatments with small amounts of blue light.”
More greenhouse research

This particular research study did not look at the effects of the light treatments after plants are moved into the greenhouse.
Wollaeger said Dr. Runkle’s lab is currently conducting another study to determine the lasting effect of light treatments on transplanted plugs.