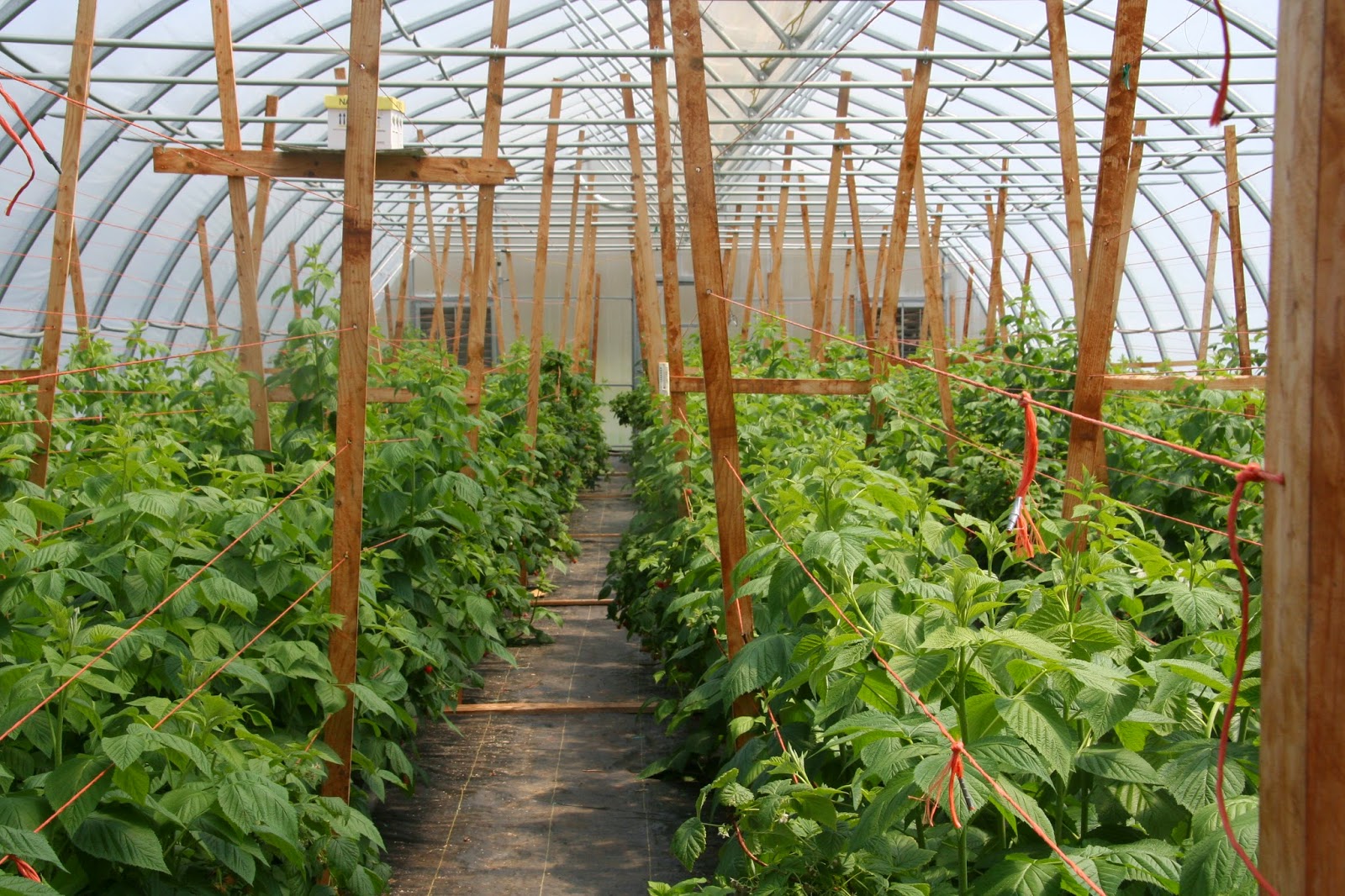 High tunnels can be a part of a production system that allows growers to produce berries year-round while improving fruit yields and quality.

By David Kuack
High tunnels have different uses in different places, said Marvin Pritts, professor and chair of the Horticulture Section of Cornell University’s School of Integrative Plant Science in Ithaca, N.Y.
“In California, many growers use the tunnels for rain exclusion,” Pritts said. “In other places, tunnels are used to help cut down on the wind and to regulate temperatures. In the Northeast U.S. the tunnels work in multiple levels. They offer protection from rain. They also offer some temperature and wind control. Their only limitation in the Northeast is the length of the seasons.”

Pritts said growers in the Northeast have been using high tunnels for about 15 years.

“We have plenty of water, good soils and the population,” he said. “It has been exciting for growers to see the response of the plants grown in the high tunnels. Growers have been able to extend production by about a month on either side of the growing season so that it is earlier or later.”

Pritts said growers of tomatoes, cucumbers and greens have taken the most advantage of using the tunnels.

“Growers who produce tomatoes were the first ones who really got into using the high tunnels in a major way,” he said. “That was followed by cucumbers. These tunnels were used for summer vegetable production. During the cooler season there are a lot of greens produced, including spinach, arugula and some other greens that can almost be grown year-round in tunnels.

Pritts said in the Northeast most of the crops are being grown for local sales. “The growers supply local grocery stores like Wegmans and farmers markets,” he said. “Wegmans has its own farm where it is using high tunnels to grow various crops for its own stores.”  Wegmans Organic Farm in Canadaigua, N.Y., uses high tunnels to grow year-round at the 50-acre operation.

Pritts said he expects water restrictions in places like California will cause more growers to look at incorporating high tunnels into their production.

“At some point more of the production is going to have to shift eastward,” he said. “Growers in the Northeast don’t have a long season, but high tunnels offer some control. It makes sense to grow some of these crops locally where the markets are, where there is enough water and it’s relatively inexpensive to ship crops locally rather than shipping them across the country.”

Pritts said growers in the Northeast are using high tunnels to harvest red raspberries earlier in the summer and to extend the production into the fall. Because the use of tunnels for berry production is a recent development, Pritts doesn’t really know which season the growers are using the tunnels for more. He expects it’s both.

Most of the high tunnel research that Pritts has done has been with primocane fall-bearing raspberries. These plants can be mowed down to the ground in the spring and they grow up and flower and fruit in the fall. Pritts said the canes can be pinched so that the plants flower and fruit later into the fall.
“In October, raspberries aren’t available from field-grown plants in the Northeast because the temperature is too cold,” he said. “High tunnels allow raspberries to be picked in October when other locally-grown berries aren’t available. Growers in southern states are already done with their fall production. There also aren’t a lot of berries coming in from other parts of the world at this time. For those countries in the southern hemisphere, it would be too early to be harvesting berries. There is an opportunity for local growers in the Northeast to take advantage of limited
market supplies. It’s a niche market.”

“Summer production requires more trellising because the canes have to be maintained through the winter,” he said. “If a grower produces summer raspberries, the high tunnels have to be kept up year-round. With fall production, since the canes are cut back, the plastic covering on the tunnels can be removed for the winter. Since the covering is going to be removed, the tunnel structure doesn’t have to be as strong because snow loads aren’t an issue.

Pritts said being able to take the plastic off of the tunnels is a real advantage during the winter for the fall raspberries.

“Some of the salts in the soil can be leached out with the normal snow and rain during the winter,” he said. “Then the plastic can be put back on. If the raspberries are being grown in containers, then the growing medium can be flushed to leach out excess salts.”

Pritts said if a grower is producing summer raspberries or blackberries, the plants have to be brought through the winter in a tunnel.

“During a typical year, raspberries and blackberries make it through the winter in a tunnel just fine, although these past two winters were exceptions,” he said. “But the high tunnel has to be able to support the snow loads in order to protect the plants. During heavy snow storms, especially if the snow is wet, the snow needs to be removed from the high tunnel to prevent it from collapsing. These structures don’t usually handle more than a foot of snow.”

Pritts said it should be easier for growers to produce fall-fruiting raspberries.

Pritts said a grower could use a combination of fall- and summer-fruiting varieties along with outdoor field and high tunnel production to produce a raspberry crop year-round.

Pritts said one of the major reasons growers are producing raspberries in high tunnels is because of the difference in fruit quality.

“Tunnels keep rain off of the fruit so that it doesn’t get moldy as fast as field-grown berries,” he said. “The quality is like day and night between raspberries grown in high tunnels and those grown in the field. Tunnel raspberries definitely have a much longer shelf life.

Pritts said field-produced raspberries generally have a 10-year life span for the field they are being grown in.

“After a couple years for field-grown plants, there tends to be a decline in fruit production,” he said. “In high tunnels we never fertilize, but we amend the soil with compost before we plant. We don’t have to fertilize because the vigor of the plants is already good. There hasn’t been any decline in the yields of the high tunnel plants even after 10-12 years.”

Another benefit of the high tunnels is wind exclusion.

“The stems on the raspberry canes are very thin and there is a lot fruit at the top of the plants,” Pritts said. “When the wind starts to blow, it whips the field-grown canes back and forth. This doesn’t happen in the tunnels. Previous research has shown the wind can be very detrimental to raspberry yields.”

Since the plants grown in tunnels aren’t exposed to the rain, drip irrigation is used to water the plants.

“Irrigation in the tunnels is between the plant rows,” Pritts said. “Outside when it rains the weed seeds germinate. In the tunnels there’s not much weed pressure at all.

“Another advantage of the high tunnels is the fruit can be harvested even when it’s raining, when it’s cold or when the wind is blowing. People don’t want to harvest in inclement weather. The tunnels enable a grower to schedule berry harvesting.”

Pritts said raspberry growers who use tunnels have to closely monitor plants for two-spotted spider mite.

“The difference in the populations of two-spotted mite is the biggest issue,” he said. “Outside, often times, growers don’t have to be concerned with mites. The mites are in the field, but they are at very low levels. They don’t like being wet so when it rains it depresses the populations. In the high tunnel where it doesn’t rain, there is a dry environment, which the mites thrive in.”

For more:
Marvin Pritts, Cornell University, School of Integrative Plant Science,
Horticulture Section, Ithaca, NY 14853; (607) 255-1778; mpp3@cornell.edu.
Other sources of information on the production of high tunnel berries:
High Tunnel Raspberries and Blackberries,
http://fruit.cornell.edu/berry/production/pdfs/hightunnelsrasp2012.pdf.
Raspberry Variety Review,
http://www.fruit.cornell.edu/berry/production/pdfs/raspcultreview2012.pdf.
Low tunnel strawberries
Marvin Pritts, professor and chair of the Horticulture Section of Cornell University’s School of Integrative Plant Science is also doing a study on the production of strawberries in low tunnels. He is growing day neutral strawberries, which flower and fruit nearly all summer into the fall, in low tunnels.

“The strawberries are planted on a double row on a 16-inch raised bed with white plastic,” he said. “Hoops, which are covered with plastic film, go about 18 inches above the plants. The plastic is held down on the hoops with bungee cords.”

Pritts said the plastic film helps to keep the temperatures lower during the summer. The covered tunnels also retain some heat during the fall.

“The sides of the tunnels remain up almost all the time,” he said. “When it rains or it’s going to be cold or windy, the tunnel sides are lowered. The strawberries produce high quality fruit which can be grown nearly year-round.”

Pritts said it is about four times cheaper on a per area basis to use a low tunnel than it is to use a high tunnel because a tall hoop structure isn’t required.

“The plants only grow low to the ground so there’s no need to construct a 15-foot tall structure,” he said. “Like in the high tunnels, the plants in the low tunnels are watered and fertilized with drip irrigation. The drip line runs down the middle of the bed between the two rows of plants.”