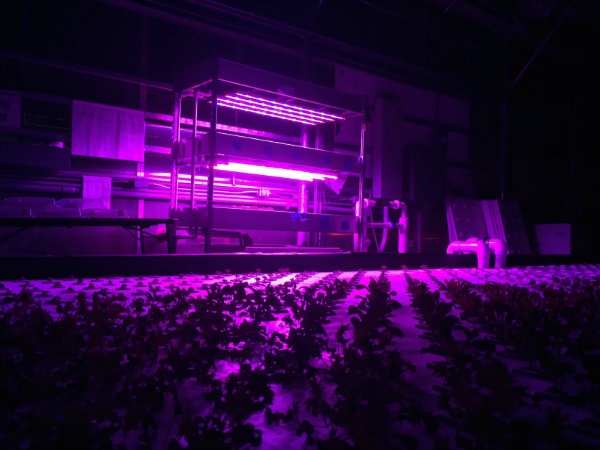 Growers of hydroponic vegetables or those considering starting growing vegetables hydroponically should plan on attending the AmericanHort Production Technology Conference. Scheduled for Oct. 9-11 in Dallas, the conference begins with a Technology in Action Tour on Oct. 9 which will visit three local production operations: Hort Americas research and demonstration greenhouse, Seville Farms and Southwest Nursery.

Hort Americas, a horticulture and agriculture wholesale supply company, has retrofitted a 12,000-square-foot floriculture greenhouse for the hydroponic production of vegetable crops. Tyler Baras, who is the special projects manager at Hort Americas, is overseeing the trialing of five different production systems along with the testing of potential products for the company’s online catalog. The production systems include: nutrient film technique (NFT), deep water culture floating raft, a vertical hydroponic tower system, a flood-and-drain vertical rack system and a new capillary mat manufactured in Europe. The greenhouse is being used to grow a wide variety of lettuces, leafy greens, herbs and microgreens.

The NFT system uses a new channel design. Baras said the narrower channels allow for the aging of crops without having to physically move plants from nursery channels to finishing channels.

“We have been managing the nutrient solution with water tests and individual salts. Instead of using a standard N-P-K fertilizer like we have been using in the other production systems, we have really focused on water tests and making nutrient adjustments based on those tests. We have been trying to keep the nutrients within a target range and trying to run the system for as long as possible without having to flush any of the nutrient system. We are testing for all of the essential nutrients. We are also looking at sodium chloride levels and seeing how those accumulate. Also, we are tracking what essential nutrients accumulate over time and how we can adjust the fertilizer being added to accommodate the natural accumulation in the system.”

Baras is also studying how the water source can contribute to the nutrient level.

“We are considering how source water may be a limitation to applying this no-flush technique,” he said. “Our source water is municipal water, but it has a high sulfur content of about 44 parts per million. So we are looking at cutting out all sulfur inputs. We are learning the challenges of trying to manage a no flush system.”

Another hydroponic system that Baras is working with is a vertical tower commonly used by smaller growers.

“We have a lot of customers who use this system so we decided to install one in the greenhouse so we could look at some of the issues that they are dealing with,” he said. “We also were looking to answer some of the questions that our customers had about using the system. An example is can this system be used to grow organically? We’ve done both organic and conventional trials with this system.

“We’ve also been looking at what crops perform best in this vertical system. We’ve done a lot of variety trials as well as with the other systems we’ve installed.”

Hort Americas is also trialing a vertical Growrack from Growtainer.

“This is a flood-and-drain vertical rack system,” Baras said. “The rack has three levels, but it could be expanded. The rack has a 2-foot by 5-foot footprint. We have equipped it with GE LED lights. This would be the type of system used in a vertical farm setup.”

Baras said the Growrack system, which is set up in the greenhouse, has done well in warm conditions because its water reservoir is below the rack.

“The reservoir is usually stored underneath the racks so it is in shade,” he said. “The water isn’t always in the trays so it doesn’t collect the heat from the trays. It works well in warm climates.”

Although Baras has grown full size crops in the Growrack, it is being used now primarily for seedling propagation.

“The focus of the system is how it has enabled us to cut back on the amount of space that is needed for propagation,” he said. “We can easily grow enough seedlings in this system for a 10,000-square foot greenhouse.

“The system is also being used by a Central Market store in Dallas to finish crops for its Growtainer farm. We helped consult on the management of the system and showed store officials how it could grow crops from start to finish in the same Growracks. The store is growing fully mature butterhead lettuce and basil in the system. This system can definitely work in indoor vertical farms.”

Baras said he has grown both organically and conventionally with the Growrack system.

“We have done organic seedling propagation in it,” he said. “We have used a variety of conventional and organics substrates and fertilizers with it.”

In addition to trialing LED lights vs. natural light for greenhouse seedling propagation and crop staging, Baras said he is also looking at using LEDs supplemental light throughout the production of butterhead lettuce in the floating raft system.

“We are looking at how LED light affects leaf texture and plant morphology of butterhead lettuce,” he said. We are trying supplemental lighting during the summer. We are pulling shade so the light isn’t very intense. It appears that intense light can lead to tip burn that damages the plants leading to a poor quality crop. So we pull shade cloth and then run a prototype high-output LED grow light provided by GE for almost 20 hours. We deliver a low intensity of light over a longer period so we can provide the plants the light they need without stressing them. We are trying to improve the quality by adding LED light in order to produce more compact growth that is associated with LEDs.

“Under greenhouse shade cloth the lettuce leaves look fragile. We are trying to grow the lettuce to hit a certain weight. If the plants are grown under shade they look fairly large and floppy and the head doesn’t have the right density at its core. By using the LEDs we can produce the more traditional morphology where the plants have a dense core. The leaves aren’t floppy and the plants look more like traditional butterhead should look.”

Baras said he is trialing a wide range of crops in all of the production systems he is using.

“Primarily we are focused on lettuce and basil, but we are trialing a lot of varieties,” he said. “We definitely see some systems are capable of growing some varieties that other systems are not. We want to be able to recommend what varieties grow best in what systems. We are preparing a book based on our research that will include an entire section on strategies for how to use these production systems. We will provide example situations in the book discussing location, climate, market, what crops are being requested by that market and how to use that information to determine what production system is most appropriate.

“We are looking at primarily butterhead, romaine and oakleaf lettuce and 20 different basil varieties. We are also doing trials with arugula, spinach, cilantro, kale, chard, Asian greens and microgreens. We are doing an extensive study of herb varieties. There are also some unusual crops like stevia, wasabi arugula, celeriac and sorrel. We are determining all of these plants growth habits in the different production systems. This information will be in the book along with the details and nuances of growing each crop.”

Based on the trial results, Baras said the book will provide details on each plant variety and its performance in each system.