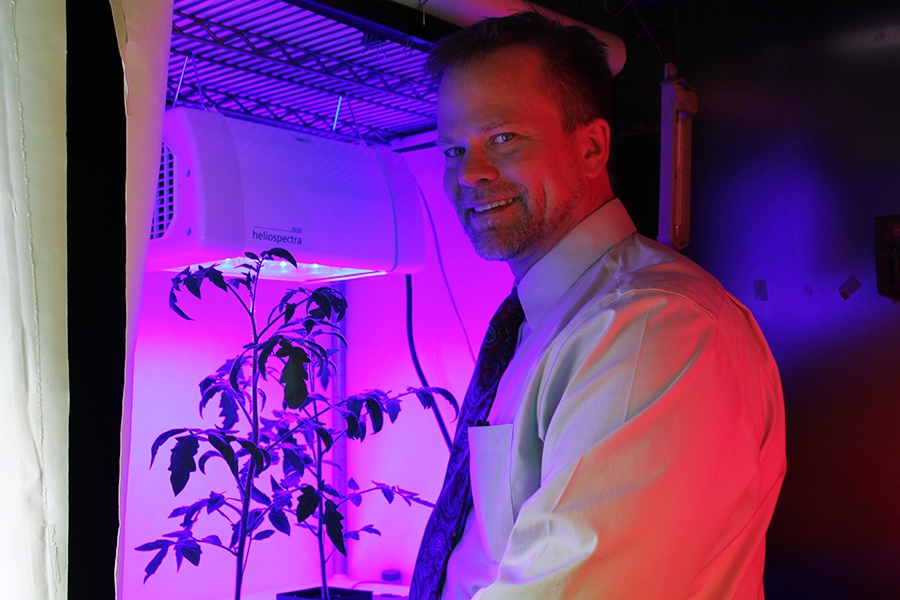 Kevin Folta, chairman of the Horticultural Sciences Department at the University of Florida, said more researchers, farmers and students need to be using social media to promote themselves, their research and their industries.

Kevin Folta, professor and chairman of the Horticultural Sciences Department at the University of Florida, has been writing online blogs since the late 1990s.

“Initially it was a way for me to communicate funny ideas and comedy,” Folta said. “I did a lot of blogs that covered critical thinking and skepticism, especially for like UFOs, quack medical claims and the anti-vaccine movement. It was kind of over-the-top criticism.”

Folta said he found having his own website was a great way to get his name out to the scientific community as well as to the public. He quickly learned that social media was also a good way to disseminate science communication. He began to use social media to promote his own research.

“I also used to program websites in HTML,” he said. “When I was in grad school I had a business on the side creating websites for companies in my town. I would walk into a business and explain to them how they should have a website that will come up on a computer and people can learn about their company, including their business hours and how to contact them. They would say they’re not interested because that it would never catch on.”

Focused on social and science issues

Folta began writing social and science commentary blogs in 2003. He now writes about six blogs per week depending on the prevailing news and what topics are appearing in social media.

“My blog, called Illumination, takes current topics and provides a scientific overlay,” he said. “I try to use my blog to provide a trusted source of good information for someone looking for clarification on scientific topics.

“I write mostly about the reality of genetic engineering concepts. Clarifying the reality. I also write about nutrition, climate, vaccines and other areas that have some public controversy and scientific consistency. The blog articles are inspired by current topics or current situations arising as I communicate science. Something I’ve learned, something I want to share. Most of them are commentary and distillation of something about science. Lately I have been writing a lot on transparency and conflict of interest.”

Folta said all of the topics he writes about are serious.

“People do misinterpret my sarcasm and snark,” he said. “The blogs are meant to make people laugh or to make a topic approachable or enjoyable. How do you reach more people with cool stories? You make them laugh. You help them enjoy clever visual language to disseminate rather dry topics.”

One of the recent topics of Folta’s blog has been the Environmental Working Group’s Dirty Dozen list of fruits and vegetables contaminated with pesticides.

“The Environmental Working Group publishes this list of fruits and vegetables it says shouldn’t be eaten because they’re covered with pesticides,” he said. “I want to provide some clarity to that claim. I know the kind of pesticides that are used and the group is wrong and is hurting farmers.

“Social media gives me the megaphone I need to do my job to protect the farming interests in my state. This is a big part of what I focus on. With a presence of bad information on the web, I want to be the person who stands up for agriculture whether or not anyone else will.”

Folta said one of the most important things occurring on social media is the discussion of science, including food and farming.

“Scientists and farmers, people who know the most about these topics, aren’t participating,” he said. “This is why there is such a sorry state of research funding that all of the food scientists complain about. My colleagues and my students don’t realize we hold the power to fix this just by getting involved.”

Folta said being able to promote the research of scientists and students is one of the advantages of using social media.

“Generating awareness of your research program and showcasing the research of students and postdocs helps to develop a brand,” he said. “When my grant proposals come across the desk of reviewers, they know it is going to be sound science and that it is going to be shared with the public. Social media can be a conduit to make research relevant and penetrating to the taxpayer, the people who are financing the research. It is a great way to show a return on government investment.”

Folta said he gives talks to grad students and postdocs on the importance of social media.

“I tell them they have to have a blog,” he said. “They have to personalize themselves as scientists. They can’t be an inaccessible person with a lab coat, who publishes a few research papers a year and doesn’t talk to the public. You have to be an approachable, interactive, trusted source of information. The only way you gain that trust is by letting the public understand who you are as a person.

Folta trains faculty and students on how to promote themselves and their research programs using social media.

“It’s been slow to catch on,” he said. “One of the biggest surprises has been some of the recalcitrant faculty that you thought would never do it. Some of them turn out to be all-stars. They quickly realize the power of the medium. Once they get in and get comfortable, they see how it influences the visibility of their excellent work.

“This is the beauty of Twitter. You don’t even have to write anything. By going into Twitter and reading, endorsing and retweeting what you find is useful information, you still develop a brand. People will know that they can look at your feed and consider you to be a reliable and trusted conduit to good quality information and clever writing.”

Folta also has gotten into producing weekly podcasts. He has been doing the podcasts since June 2015.

“I get as many of the podcasts interviews as I can from the compelling people who I meet and who I read about online,” he said. “I put those interviews together and do the production, including the artwork. It’s a lot, but I really enjoy it. Most of the podcasts are between 30-60 minutes long. They take about three hours a week to put together. In June, I got the 200,000th podcast download. That is a pretty good investment.

Folta said he uses the podcasts to talk about how biotechnology is a tool that can be used to do good things.

“I want to make people more comfortable with technology,” he said. “I can talk to an expert to help people understand it.”

Folta said the different forms of social media he uses have complimentary roles.

“Twitter is a transitory rapid message that has wide penetration,” he said. “For the blog, someone has to know about it, stumble upon it or be drawn to it through Twitter or Facebook. Facebook is kind of in the middle. It is a repository for good topics of interest from people in science. You’re able to develop good presence and penetration by optimizing all of tools to their maximum.”

Folta said an increasing number of university programs and departments with communication groups are realizing that social media is the modern day press release.

“Social media is where you disseminate your information and keep your name in the front of the public’s mind,” he said. “More universities have dedicated people who work to communicate faculty research to the public. The problem is that some of these people don’t necessarily understand the science and it reads more like jumbles of facts rather than a an interesting story that connects the public and the scientists. We need to be more in that space. We are doing better all the time.”

Folta said there are good researchers worldwide who understand the power of social media and use it effectively.

“In my university unit the leaders of the department were told they need to be on Twitter,” he said. “I love Twitter because I write a blog and then disseminate it to 12,000 Twitter followers and then it goes out to thousands more people. I use Twitter to amplify or advertise my blog and podcasts. I also use Twitter to amplify other ideas that I really like and other writing that I really like.

“The problem is that from students to faculty, they don’t think they have the content. They know the tool, they just don’t know what to do with it. They don’t think it’s important enough to show them planting something in the greenhouse on social media. But that’s the idea. For their friends it doesn’t matter. But for someone who wants to learn more about it, it has to be there. If you aren’t there someone else will be, and that other voice might not get the science right.”

“We could even start asking students to generate essays and assignments as social media entries,” he said. “Instead of an essay for an exam being written on paper, it should be written as a blog entry. This way the student also is creating web content for curious people to find.

“This is how we can use social media to disseminate good information. This is something that we are going to see more and more of going forward.”