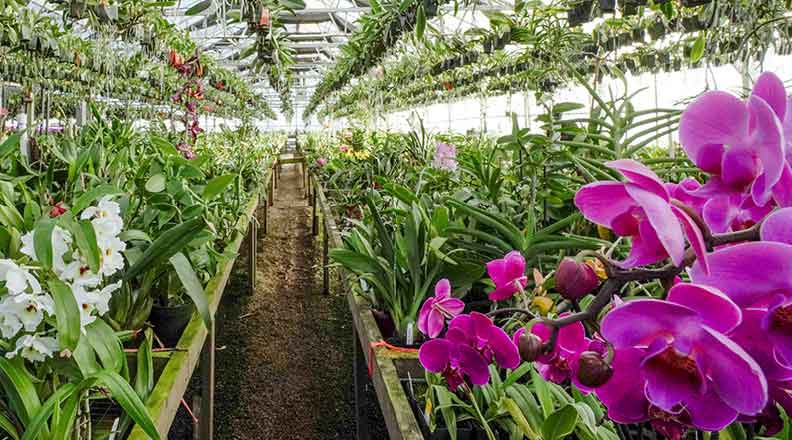 This article was originally posted on currentbyge.com

Stan Gordon discovered the ultimate houseplant in 1986 when a friend gifted him a single orchid commemorating the birth of his daughter. Fast-forward 33 years, and Gordon finds himself surrounded by over 70,000 orchid plants in a 10,000-square-foot greenhouse in Louisville, Colorado. Business is always “blooming” at Fantasy Orchids with an ever-changing assortment of colorful, fragrant flowers, thanks in part to new LED lighting from Current, powered by GE, that makes growing season a year-round proposition.

“Back then, I was amazed at how long the flowers lasted and that got me intrigued with orchids,” recalls Gordon. “Over time, I traveled to Hawaii to meet other growers, built a greenhouse in my backyard and started selling wholesale. That’s until 1995 when we ran out of room and purchased a property outside Denver where we still operate today, only with thousands more plants to care for.”

Just two years ago, while thumbing through National Geographic magazine, Gordon read about the effects of LED lighting on plant growth and was eager to learn more. He quickly phoned Hort Americas, a leading greenhouse and hydroponics supplier, to speak with their representative John Frey about illuminating options for orchids.

“We get a lot of sunshine so we had always grown without a lighting system, but as the business got bigger, we started to look at what lights could do for our harvest cycles,” says Gordon. “Orchids generally grow in very bright conditions in tropical regions where the daylength does not change as much as it does here, so I always assumed we could speed up the process by giving our plants extra light, and that is exactly what happened.”

Eager to help Gordon prove his hypothesis, Frey and the team at Hort Americas clued in the orchid expert about a new product from Current. At that time, the Arize Element™ top lighting LED growing system had yet to hit the market, making Fantasy Orchids the first commercial operator to trial Current’s advanced technology for greenhouses and indoor farms. Delivering high light output with less heat than standard high-pressure sodium and metal halide lamps, Hort Americas estimated the Arize Element system would provide Fantasy Orchids the perfect spectrum to grow efficiently throughout the year.

“Stan and I exchanged many calls, many pieces of information. I checked into things he learned and vice versa,” says Frey. “It became this process of going to the next step, then the next step, and trying to do that logically without any directly correlated information about orchids. Like most growers, Stan needed to build lighting around the structure he already had. As we were designing different layouts, the answer kept coming back to Arize, so he made the decision to install 70 fixtures in the greenhouse.”

Inside Fantasy Orchids, long rows of raised beds stretch end-to-end, packed with a variety of plants in various growth stages. Above the orchids hang even more orchids suspended by cables, creating a unique two-tiered system that maximizes grow space within the greenhouse. At the same time, this design created a dilemma for Gordon when it came to adding LEDs.

“We knew we needed to install the lights above the beds, about the same height as the hanging pots we have, which could have melted the plants if we used a light source that puts off a lot of heat,” he explains. “When we tested Current’s LEDs, we didn’t have those concerns because the heat was so minimal; the plants can be right next to the lights and it’s not a problem.”

Wiring the system also warranted special consideration, from spacing the fixtures to mounting drivers in accessible locations and connecting everything to a reliable power supply. Hort Americas was quick to answer questions, give suggestions and guide Gordon to a successful outcome.

“I can only do so much research on my own. Without Hort Americas coming in and filling in the gaps, we might still be experimenting with the layout,” says Gordon. “They were able to feed me the information I needed to hook everything up, so we were ready to roll when the lights arrived in May last year.”

With the prep work in place, Gordon found that installation was painless and switched on the new lights within a week of receiving them. As calculated, the Arize Element system delivered direct light to some plants while immersing others in reflective light, effectively bringing full illumination to the densely packed greenhouse.

“We grow about 40 varieties of orchids at any given time, and almost all of them have reacted very positively to the lights; we haven’t had any leaf burning or negative effects,” Gordon says. “The biggest difference so far is what we hoped for, where plants that typically take two to three years to develop are now starting to flower at 16 to 20 months, which is important in terms of our ability to move plants more rapidly.”

“It’s difficult to anticipate orchid demand years in advance, what colors and varieties will be popular, so shortening the growing cycle is one way to keep our cost per plant down while having the flexibility to adjust to changes in preference.”

Gordon, who is a practicing financial professional when not tending to his botanical business, examined the impact of LED lighting on his electricity bill before committing to a full install. A year later, he reports that the returns are even better than expected.

“I did a lot of homework to figure out how much powering the lights would cost, and it has been within pennies of what I anticipated, so that was a very positive thing,” says Gordon. “On average that’s a couple hundred dollars a month, but when I divide it out by the number of plants that are growing faster, it’s not even a consideration worth thinking about.”

Something Is Always Blooming

There are some 27,000 species of orchids in the world, and while Gordon can never grow them all, Fantasy Orchids is now growing faster with an assist from Hort Americas, Current and Arize Element LED fixtures.

“We’ve been able to increase the number of plants in the greenhouse and decrease the time they’re in there, so the lights make it like having an extra 5,000 square feet of grow space we didn’t have to build.”

“We’ve been able to increase the number of plants in the greenhouse and decrease the time they’re in there, so the lights make it like having an extra 5,000 square feet of grow space we didn’t have to build,” says Gordon.

“Hort Americas played a key role in this,” he adds. “It would have been much more difficult without John in my corner because I knew virtually nothing about lights two years ago, and now we are successfully using LEDs to reach new growth milestones. We’ve even flowered a couple varieties of orchids this year that we’ve never flowered before.

“People across the state travel here to see orchids they can’t see anywhere else, and we’re proud to give them an unforgettable experience.”

Want to learn more about how you can work with Current by GE to build your vertical farming or greenhouse operation in a way that benefits your business, and the environment? Click here