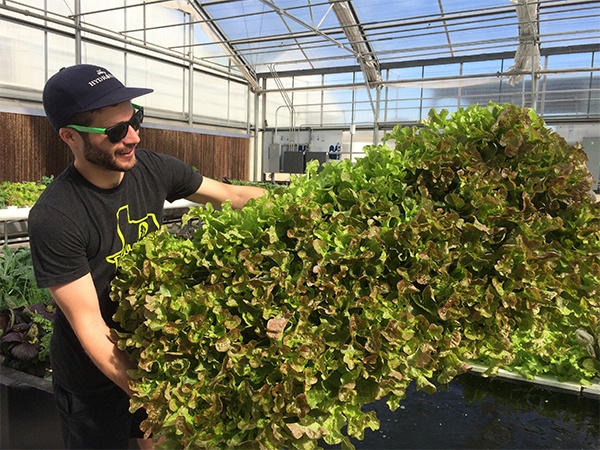 Early results from fertilizer trials in Hort Americas’ research greenhouse show knowing the levels of nutrients in fertilizer solutions can go a long way in avoiding problems with deficiencies and toxicities.

Hort Americas has retrofitted a 12,000-square-foot greenhouse in Dallas, Texas, for the purpose of studying edible crop production in a variety of hydroponic production systems. The greenhouse is also being used to demonstrate products offered in the company’s online catalog.

Tyler Baras, who is the company’s special projects manager, is overseeing the trialing of leafy greens and herbs in five different production systems.

Baras said the fertilizer recipe he is using in the deep water culture and NFT systems is based on general recommendations from Cornell University and the University of Arizona for leafy greens crop production.

The deep water culture system has been running for three months. The water reservoir for the system is 8,000 gallons.

“Even if water evaporates, since it is such a large body of water, the electrical conductivity (EC) doesn’t really move much,” Baras said. “The EC has been very stable during the three months it has been operating. The reading has barely moved.”

The first trial with the NFT system, which has a reservoir of about 140 gallons, lasted for three months.

“Every week I added an additional 40 gallons of water on average to the NFT reservoir,” Baras said. “The water is evaporating and the salts are accumulating a lot faster in the NFT reservoir than in the deep water culture system. Because the NFT system has a smaller water reservoir, the quicker evaporation rate and the water replacement in the reservoir, has caused the EC to shift a lot more.”

Baras said even with the changes in nutrient levels all of the plants have been performing well.

“I haven’t seen any nutrient deficiencies or toxicities even as the fertilizer recipe has shifted over time. We have been trialing a wide range of crops, including butterhead and romaine lettuces, kale, spring mixes and basil. I’m trialing a lot of crops to figure out when these crops start to be impacted by possibly too much salt accumulation. I haven’t seen anything yet that is alarming.

“One of the things that I have seen over the years working with fertilizers is how wide the acceptable range is for plants to grow well. Between the NFT and deep water culture, the NFT is using half the nitrogen and the plants are performing very similarly. There are recommendations for EC, but none of these fertilizer levels are set. I have some systems that have 20 parts per million phosphorus and some that have 50 ppm and the plants look the same. Most general recommendations say 40-50 ppm. I’ll have some solutions that have 3 ppm iron and others that have 6 ppm iron. It is interesting to see how wide the range is for a lot of these nutrients and the crops are performing the same.”

Baras said he has seen a slowing of plant growth in the NFT system.

“I’m not seeing any deficiencies or toxicities, but the crops have slowed down about a week over the deep water culture,” he said. “Depending on the crop, it’s taking a week longer to reach either the plants’ salable weight or height.

“The slowing in growth could be related to the nutrients. This could be useful information for growers. If they are checking the EC, which may have been 2.3 when a crop was started, if there is a slowing of growth, growers may want to have a water test done. The test could show that the amount of nutrients might be changing.”

Identifying what makes up the EC

During the three months that Baras had been running the NFT system he never flushed the system.

“All that I’ve done with the NFT system is add water and additional fertilizer to maintain a targeted EC,” he said. “One of the goals of the trials is to see what ions are accumulating in the system and to see how long I can run the system before it has to be flushed. When I started the target EC was 2.2-2.3. I still achieved the target EC at three months, but the composition of what was actually in the water changed.

“Originally the NFT fertilizer solution contained about 185 parts per million nitrogen. At the end of the trial the EC was the same but there was only 108 ppm nitrogen in the solution. The calcium concentration was originally 250 ppm and ended at 338 ppm. Sulphur was originally at 80 ppm and rose to 250 ppm. Nutrients have accumulated as the water evaporated. Solely going by the EC meter reading doesn’t tell the full story of what is in that water. The EC of the fertilizer solution that I started with is the same as the EC for the fertilizer solution three months later. The difference is the ions that are making up that ending EC.”

Baras is growing a variety of cut herbs in vertical grow towers. The plants are fertilized with Terra Genesis, a molasses-based organic fertilizer. He said Hort Americas has been hearing from tower growers who are interested in trying to grow organically.

“Our city water contains calcium and some magnesium. These elements are actually the nutrients that the organic fertilizer is slightly low in. So as I run the system longer, through the addition of city water, I actually start to see an accumulation of both calcium and magnesium, which actually helps balance out the total fertilizer recipe. The balance of the nutrients has improved over time.

The pH was fairly unstable as it seemed to be going through several biological waves. It was moving rapidly between high and low. As I run the tank solution longer the total alkalinity has increased, which has stabilized it. The biological activity has also started to stabilize. The pH has stabilized in the upper 5 range. For the plants grown organically I have seen deficiencies pop up. The deficiencies were reduced as the fertilizer tank solution ran longer. The deficiencies appear to have balanced out.”

Baras said one noticeable difference between the NFT, deep water and vertical grow towers is how much slower the plants grow in the towers.

“I don’t know what to contribute the slower growth to yet,” he said. “It could be trying to determine the best fertilizer rate for the fertilizer. It could be the crop selection, because most of the crops in the towers are different from what I’m growing in the NFT and deep water culture.

Baras said one of the issues that can arise with using organic fertilizer is the development of biofilm in the irrigation lines that can cause emitters to clog.

“I am incorporating a product called TerraBella, which contains beneficial microbes,” he said. “These microbes help mobilize certain nutrients, like phosphorus, which can promote the formation of biofilms. This biofilm buildup is usually more of a problem with high water temperatures.

“About every six weeks I add a booster application of the beneficial microbes depending on the production system. The deep water culture system has a larger reservoir so I am not replacing evaporated water as often. For the other productions systems, like the NFT and grow towers, where I am replacing the water, I am incorporating the beneficials more often. For these systems, the fresh city water that is added dilutes the fertilizer solution. Also, there is chlorine in the city water that possibly could negatively impact some of the beneficial microbes.

Products being used in greenhouse trials