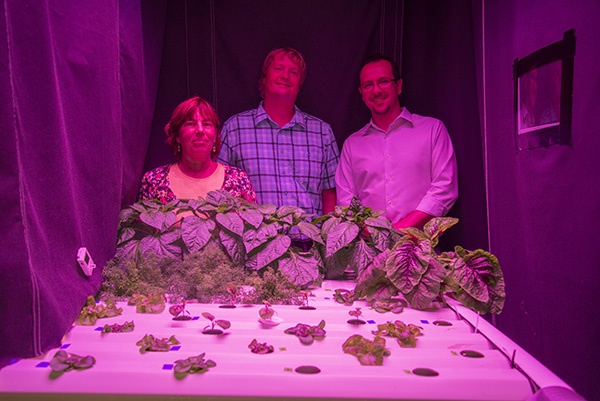 Even though the Greenhouse Lighting and Systems Engineering (GLASE) consortium is New York-based, the research it is doing has the potential to impact controlled environment agriculture worldwide.

The Greenhouse Lighting and Systems Engineering (GLASE) consortium is a partnership between Cornell University in Ithaca, N.Y., and Rensselaer Polytechnic Institute (RPI) in Albany, N.Y. The consortium will be conducting research to improve controlled environment agriculture (CEA) operations including reducing energy consumption.

The goal of the consortium is to create a more sustainable and profitable greenhouse industry. Although the focus of the research will be on greenhouse production, the findings should also have application to indoor CEA production including vertical farms and warehouses. Greenhouses, which can be electricity-intensive depending on the level of automation, cover 720 acres in New York State. The consortium is looking to reduce greenhouse electricity use and concomitant carbon emission by 70 percent and to increase crop yields by 2030.

Erico Mattos, who was appointed executive director of GLASE in June, said he has been hired as a subcontractor by Cornell University and will be working to recruit industry members to join the consortium.

“Currently I have a 50 percent time appointment with GLASE,” Mattos said. “My time with GLASE will increase as we bring in industry members. I am living in Georgia, but will be moving to upstate New York over the next year and will be located between RPI in Albany and Cornell University in Ithaca.”

Mattos said GLASE is a seven-year project which has received $5 million from the New York State Energy Research and Development Authority (NYSERDA). The money will be used to sponsor research between Cornell and RPI.

“The team leaders who will be doing the research are Neil Mattson at Cornell University and Tessa Pocock at RPI,” said Mattos. “They have a set of more than 300 milestones that their teams have to reach. They have already achieved some of these milestones.”

“The teams at Cornell and RPI are well equipped with the resources they need to achieve the milestones of the core research proposal that has been sponsored by NYSERDA,” he said. “Even though the teams led by Neil and Tessa are completely self-sustainable, they may require some outside partnerships to achieve some of the goals.”

Mattos said in his role as executive director he will act as an intermediary between Cornell, RPI and NYSERDA making sure that the research is proceeding and that milestones are being completed on time.

“The most important part of my position is to create a consortium with industry members,” Mattos said. “The goal over the next seven years will be for the project to receive less money from NYSERDA and more money from industry members. We want to establish a consortium that is self-sustaining. By bringing in industry members we will have money to do our own-sponsored research, technology transfer, outreach, and market research, all these types of things and GLASE will be self-financing.

“My role as executive director is to ensure that the team moves in this direction. By bringing in industry members, offering them the project and making sure that we provide them with access to the technology that is developed by Cornell and RPI.”

Mattos said the research that will be done at Cornell and RPI is complementary and will not overlap.

“RPI will be doing more engineering-related research, such as looking at light fixtures and components including the drivers and controllers,” he said. “They are also looking at photobiology—how plants respond to different spectra as they grow and produce different nutritional compounds and changes in plant metabolism and morphology. The RPI research work is more engineering-related.

“The research at Cornell is going to be more applied in the greenhouse, such as interactions of carbon dioxide enrichment and lighting control studies. Cornell will implement some of the systems that have already been developed at Cornell. Cornell will also be looking at different systems and different crops. Initially the studies will be done with tomatoes, lettuce and strawberries and then will be extended as necessary.”

“RPI will develop new systems and Cornell will implement the greenhouse tests and then move forward to a final demonstration,” he said.

Mattos said the researchers will also be working in partnership with A.J. Both at Rutgers University, who will be doing some of the energy efficacy and radiometric studies of the light fixtures.

“One of the milestones Cornell research associate Kale Harbick will be working on is modeling,” Mattos said. “This will involve trying to calculate in advance how much energy in a greenhouse is consumed and what happens if some of the variables are changed. The research will look at how these changes affect the general energy consumption of the greenhouse.”

“Even though these companies signed letters of support that doesn’t mean they will all become consortium members,” he said. “Cornell and RPI are both already working in partnership with some companies to develop the core research. There is nothing official as industry members yet. We are looking to bring in other industry members and really make them a part of this consortium. We want to reach a broad range of industry members so this support could be both financial or it could be providing equipment to conduct the research. But the primary goal is to bring in financial support.”

Mattos said there will be a series of benefits that come with industry membership.

“They would pay for a membership and then they would get a series of benefits. We are now working with a marketing media company to promote the consortium and the opportunity for membership.

“We want to bring in large manufacturing companies, but we also want to address the other end of the spectrum and work with small growers. The growers will benefit the most from this research.”

Mattos said it is the intension of the consortium to expand with researchers from outside New York.

Another goal of GLASE is to create a hub for greenhouse lighting and systems engineering which includes the centralization of information.

“We will create a central database to indicate the academic research currently on-going in the U.S. (what, where and who) to facilitate the interaction between the industry and academia,” he said.

The crops that are to be studied initially by Cornell and RPI researchers are tomatoes, lettuce and strawberries.

“These are commercially relevant crops,” Mattos said “I went to Ithaca and met some of the members of Neil’s team, including graduate students Jonathan Allred and Erica Hernandez and research technician Matthew Moghaddam, who have been working with tomatoes and strawberries. Lettuce is also one of the most commonly produced greenhouse crops.

“Part of the milestones that Tessa will be working on will be done in environmentally controlled growth chambers and growth rooms. Tessa does not have a greenhouse. Most of the research that she will be doing is related to photobiology. Everything that she will be doing has application to warehouse production even though she is not doing the research in a warehouse. This research will look at nutritional compounds and pigment production. The research in the growth chambers will be compared with greenhouse studies.”

Although the RPI research is not targeted for commercial indoor farms, Mattos said the results could be used to support that type of production.

“The proposal is to reduce greenhouse crop production energy consumption by 70 percent in seven years,” he said. “The economic factor and the majority of the research will be looking at greenhouse systems and how to integrate them. Economically we are focused on greenhouses. But we will be doing studies in growth chambers that may have application to support indoor farm production.