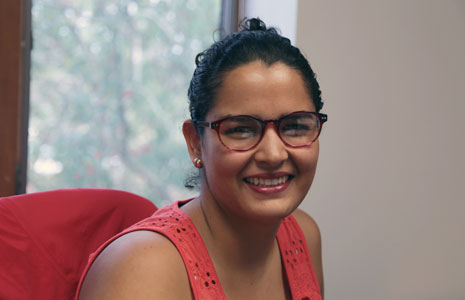 Before growers invest in supplemental lighting they need to determine the impact of natural light levels on their crops.

One of the things that University of Florida horticulture professor Celina Gómez tries to reinforce with growers when talking about supplemental lighting is the importance of the daily light integral. Daily light integral is the sum of photosynthetic light (photosynthetically active radiation) received by plants in a day. Gómez did a presentation on “Yield Responses to Supplemental Lighting” at the Northeast Greenhouse Conference in November.

“Solar DLI will determine the light intensities that growers need and for how long they will need to run supplemental lights or even if they need supplemental light,” Gómez said. “Growers should be aware of the DLI whether they are growing greenhouse vegetable or ornamental crops. It is one of the most critical factors.

“Fruiting vegetable crops have a fairly high DLI requirement, usually between 20-25 moles of light per square meter per day (mol·m-2·d-1). For most ornamental crops, the DLI won’t likely be more than 12 moles since growers are not trying to develop fruit.”

Gómez said growers may find it difficult to determine the optimal DLI for various crops.

“This information isn’t the easiest to find and there can be differences between similar species,” she said. “Finding the optimal DLI can be especially difficult to find for uncommon horticultural crops. During my presentation I had one greenhouse grower ask me about the optimal DLI for potato seed production.”

While knowing a plant’s DLI is important, Gómez said it is just as important for growers to know how much light is being delivered by the sun.

Gómez said one area where growers are making progress is how they are measuring light intensity.

“After so many years of talking about the best way to measure light that is useful to plants, growers are realizing how to more accurately measure light,” she said. “They realize the importance of monitoring the light intensity that their plants receive from sunlight.

“I expect that more growers have invested in quantum sensors to measure light intensity and if they are still using light meters they realize they have to be able to figure out how to convert those readings that makes sense in regards to plant growth. The growers are getting it and making the conversions from footcandles to other metrics like moles.”

Even though growers better understand the importance of DLI, Gómez said growers can still be overwhelmed by the choice of supplemental lights available, including high pressure sodium (HPS) and light emitting diodes (LEDs).

“Most growers don’t know exactly what specific wavelengths or spectrum or what light recipe are best for their crops,” she said. “In the case of LEDs, most growers are choosing white LEDs or a combination of colors like red and blue. When I started my PhD in 2011, most available LED arrays came in combinations of red and blue. More LED light manufacturers are adding wavelengths to their range, but most commercial LED units come with fixed wavelengths.

“Most growers don’t know which specific wavelengths work best for their crops. They are relying on what they are told by the LED manufacturers. If the growers know what they want to do with a crop, then the university researchers working with the LED manufacturers could be able to advise growers on what LED lights they should be using. It’s also going to be cheaper for the light companies to manufacture fixtures with a standard recipe than to try to come up with a specific recipe for every grower.”

Gómez said many of the research papers published about LEDs have focused on the effect of light quality or spectrum on several different crops.
“A lot of the plant responses are also affected and dependent on the intensity of light or light quantity– high light vs. low light,” she said. “Under different light intensities plants are going to have different responses. There is also the potential for differences in cultivar responses. Most growers are not going to use a specific red, blue, far-red, white, whatever ratio of light quality for one particular cultivar when they have hundreds of different cultivars in their production facilities.”

Another area Gómez said still has to be determined is the lifetime of the LEDs used in production greenhouses.

Another area that Gómez said could use more research is the area of LED interlighting or intracanopy lighting.

“This is something that we were interested in when I was a student at Purdue University,” she said. “This use of LEDs even has potential applications in areas that have high light levels.

Gómez said the use of intracanopy lighting could potentially provide light to those leaves that are shaded by the upper canopy or by neighboring plants.

“Those leaves may be receiving low levels of light and not photosynthesizing so they are not contributing to the photosynthetic production of the plant,” she said. “There is the potential of using intracanopy lighting to increase the photosynthetic activity. We don’t know yet if that is true or if that is even going to make a difference in terms of production.

“We don’t know if the plants have already reached their maximum genetic potential. We may find out that there is increased photosynthetic activity with intracanopy lighting. The increase in overall production could include number of fruit and size of fruit. Another benefit is that a specific light wavelength could increase fruit quality. That could potentially be done with intracanopy lighting by placing the fixture close to the fruit clusters. In the case of tomatoes the levels of beneficial compounds like lycopene might be able to be increased.”