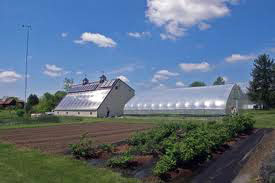 Barry Adler, owner of RainFresh Harvests, started a greenhouse vegetable business with the goal of being as sustainable and environmentally-friendly as possible.

Barry Adler, owner of RainFresh Harvests in Plain City, Ohio, was exposed to the use of solar power as a renewable energy source for greenhouses when he was a graduate student at Virginia Tech. He continued to be involved with the use of greenhouses during the 22 years he worked at the Scotts Co., including conducting fertilizer research. Because of his familiarity with greenhouse production it made sense for Adler to look at it as a business option when he left Scotts in 2002.

“I initially looked at starting a hydroponic greenhouse for growing organic tomatoes and lettuce,” Adler said. “As I began my research in 2002 to start a business, I found out my ground water had an extremely high level (54 parts per million) of sodium. Had I chosen to install a treatment system to remove the sodium, I determined that I would be making 15 cents less per pound of tomatoes than the going market rate at the time.

To deal with the high sodium ground water issue, Adler redesigned his greenhouse to use collected rain water that would be directed into tanks that he was planning to use to raise ornamental koi. A pond that holds around 30,000 gallons of water was also created to collect excessive rain runoff.

“I usually have enough rain water collected to be able to irrigate for two to three weeks,” he said. “The pond, which is only 4 feet deep, has about six weeks of reserve water during dry weather. I can also pump water from my ground well into the pond. The cattails in the pond act as filtration system to remove some of the sodium.”

The reason that Adler chose to build a renewable energy, sustainable greenhouse was because of energy costs.

“I determined after labor the second highest expense of production was energy,” he said. “Energy conservation was also a hobby of mine. I had installed some solar panels on my home when they first came out. Having 9 acres of farm land, I was able to combine my interest in greenhouse production and renewable energy.”

When Adler began researching the design for his rainwater collection greenhouse in 2003 he quickly learned there were few renewable energy greenhouses at the time. He was able to locate solar greenhouses in Massachusetts and Wyoming. He worked with a local architect who had worked on some solar greenhouses during the 1970s. He also got help from another consultant with the engineering plans.

At the time Adler was designing his greenhouse he was working as a volunteer with a non-profit organization called Green Energy Ohio. His involvement with this group allowed him to learn what companies in the state were working with renewable energy.

“I chose Third Sun Solar, which was just a mom-and-pop operation at the time,” he said. “The architect I was working with was also familiar with the company. The company, which has since grown into a sizable business, assisted me with writing a state grant proposal that I initially applied for and received to cover 50 percent of the cost of the renewable energy equipment.”

Adler installed a 1.0 kilowatt wind turbine, 12 175-watt solar panels (totaling 2.1 kilowatts) along with 12 stationary, 2-volt batteries to provide backup power. The renewable energy greenhouse, which is not connected to the utility grid, measures 30- by 48-feet. Adler also operates a second hoop house of the same size.

Adler began operating the renewable energy greenhouse in 2005. During that first year of operation Adler applied for and received a USDA Sustainable Agriculture Research and Education Grant for the development of a year-round food production system. He applied and received a second SARE grant in 2008 to evaluate the production efficiencies and market extension options for year-round production of herbs and specialty vegetables in the renewable energy greenhouse. Adler looked at a variety of crops, energy inputs and crop yields.

“The second SARE grant helped me determine that I was growing a lot of crops I wasn’t making much money on,” he said. “The yields on many of the crops were low and the dollar returns were not favorable.”

For 2012-13 Adler has received a grant from the Warner Grant for Sustainable Agriculture in conjunction with Ohio State University. The grant will be used to study the feasibility of raising yellow perch and hybrid bluegills in an aquaponics
system that he designed.

“I designed my own aquaponics system in which I was raising koi as an ornamental fish,” Adler said. “I will be trying to adapt my system to raising perch and bluegills in an unheated high tunnel greenhouse. There are local processors and an Asian fresh fish market that should be able to purchase the small amount of fish that I will be raising.”

Meeting local market needs Adler said the primary criterion for choosing the crops he decides to grow is that there is a market for the crops. He delivers the crops himself to restaurants, caterers, grocery stores and food service companies within a 25 mile radius of his farm.

Adler initially started growing herbs and at one time was doing 12-15 varieties, including lavender, four to five different varieties of basil, summer sage and different kinds of mints.

“I have reduced my herb offerings down to only a few items,” he said. “My major crop is ‘Genovese’ basil. This was based on the
local market demand. Many chefs prefer ‘Genovese’ basil, but most distributors only offer sweet basil. There is a high demand for locally-grown and I offer a high quality product.”

Two other crops that Adler has seen an increased demand for are arugula and mizuna. He said he tried about a half dozen varieties of arugula before he was able to find one that grew well under his production conditions and that produced good yields. He added mizuna to his product mix two years ago and said he hasn’t been able to keep up with the local market demand for the crop.

“You constantly have to keep your finger on the market place to gauge what’s hot and what’s not,” he said. “Last year I began servicing the kitchen at a Whole Foods grocery store with fresh herbs. I produced some field-grown heirloom tomatoes for the store and they bought all that I grew. I’m planning to expand my tomato field production this year.”

Adler also tries growing half a dozen new varieties of peppers outdoors every year. He sells paprika and jalapeno peppers to a local caterer.

“These companies may not have done many greenhouse installations, but a lot of the installation technology transfers from one type of building to another,” he said. “It’s basically related to electrical load, that is, how many square feet of solar panels are needed or how big of a wind turbine is needed to provide enough power for the load demand. Also, check on the certification of the installer.”

When figuring the costs of the equipment and installation, Adler said it literally pays to look at federal, state and local tax incentives along with grant opportunities. He recommends that growers check out the Database of State Incentives for Renewable Energy website, which has information on renewable energy. DSIRE is a comprehensive source of information on state, federal, local and utility incentives and policies that support renewable energy and energy efficiency.

“There are a lot of tax-related issues that growers need to look at,” he said. “Many states have incentive programs and there may also be utility programs available. Sit down with your tax accountant to discuss tax write-offs for capital investments.

“It’s surprising how many businesses don’t realize that renewable energy systems can pay for themselves in a short period of time. Some of these installations can be paid off in three to five years. From that point on it’s a free energy source. Even if it takes 10 years to pay off the system, it still might be worth it depending on a company’s energy costs. That’s why it is so important to put the numbers down on paper.”