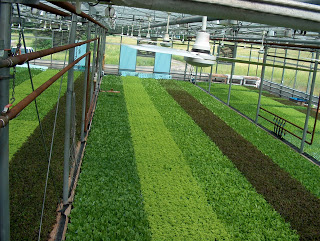 Why you should consider lighting greenhouse vegetable crops.

“It depends a little on the scale of the greenhouse facility,” Brechner said. “It also depends on the crop and what’s the market. If you are growing in November, December, January and February in some of the darker locations in the country, which covers a sizable area, you absolutely need supplemental lighting, if you want to have maximum production.”

Brechner said a greenhouse vegetable grower is going to need a minimum of 15 moles of photosynthetically active radiation (PAR) per day in order to produce a crop.

“For tomatoes and cucumbers I tell growers that they should have more than 20 moles per day to produce a good crop. I don’t know how different production would be if the light level was 30 moles per day. Is it worth the extra 10 moles for the grower to put in supplemental lighting? I’m not sure. But it is certainly worth it for a grower to go from 1 to 10 moles and from 10 to 20 moles.”

“Growers can have problems with both high and low light levels depending on the season in which the grower is trying to grow and where in the country he is located,” she said. “If a greenhouse lettuce grower is trying to grow in Georgia in August or even October, he is going to have a problem with too much light. The grower better have a shade curtain in the greenhouse or he is going to have tip burn problems.

“In Massachusetts in December the issue is going to be not having enough light. I have talked to growers in the Northeast who have told me that they don’t use any supplemental light and they don’t use much heat, but it take them three months to produce a crop. If they were lighting and heating, they could finish that crop in 35 days. Also, in the Northeast the growers are going to have less than 15 moles per day outside light. And depending on the glazing the greenhouse is covered with is going to determine what percentage of light will make it into the greenhouse. It is going to be somewhere between 65 percent on the low end and 90 percent on the high end depending on a number of factors.”

Brechner said the amount of PAR light that reaches the plants is a function of:
1. the angle of the sun in relation to the glazing,
2. what the glazing material is made of,
3. the cleanliness and condition/age of the glazing,
4. shading from greenhouse structure components, and
5. type of light (direct or indirect).

Brechner said that growth is directly correlated to the amount of light the plants receive, especially when they are in a vegetative state.

“I think lettuce is a less forgiving crop. Tomatoes and cucumbers if you don’t give them as much light they will still grow,” she said.“Lettuce should have 17 moles of PAR per square meter per day. This refers to the combination of natural light that is transmitted through the glazing as well as any artificial light that is used.

Our research has shown that an average of 17 moles gives optimal growth while minimizing tip burn. Brechner said there are some differences in the amount of light that different types of lettuce will tolerate.

“We’ve found for Boston (bibb) lettuce that a daily light integral of 17 moles of light per day used with vertical airflow to increase the rate of transpiration in order to increase calcium uptake prevents leaf tip burn,” she said. “Romaine lettuce can’t take as much light before it gets tip burn. And it certainly can’t take as much light without having vertical airflow.

“Lettuce grown outside receives more than 17 moles of light per day, but it is windier outside. Lettuce, especially romaine, grown outside will get tip burn if there is too much light. Even during December you can find field-grown lettuce coming from California that is tip burned.”

Cornell researchers have developed a light control algorithm that controls for daily light integrals. It’s called LASSI (Light and Shade System Implementation). The software interfaces with the greenhouse environmental control computer to turn on the supplemental lighting or to pull the shade curtains.

“Every hour of the day LASSI goes through a series of rules and makes the decision to turn the lights on or to pull the shade,” Brechner said. “It seeks to optimize the use of off-peak power. Most greenhouse operations have off-peak power rates which are usually from 11 p.m. until 5-6 a.m. The power at that time is significantly cheaper.

“This program can get a little tricky with tomatoes because they need four hours of darkness every day or they don’t grow well. Lettuce does not need this dark period.”

Brechner said LASSI can be used with any crop as long as the grower knows the appropriate target daily light integral. “We have used it (LASSI) with tomatoes that need a 4 hour dark period to grow normally,” she said. “Optimum DLIs have not been published in peer-reviewed literature. We have investigated a range of DLIs for lettuce from very low (8 moles) to high (22 moles). A similar set of DLI vs. production curves would be useful for all typical greenhouse vegetable crops, but I am not aware that they exist.”

Brechner said growers have the option of using supplementing carbon dioxide to substitute for a certain amount of light.

“For example if a grower supplements with 1,600 parts per million carbon dioxide, he can use half the amount of light and get the full amount of growth,” she said. “Adding carbon dioxide makes photosynthesis more efficient allowing the plants to fix more carbon with less light.”
Cornell has developed two versions of the LASSI program:
the original LASSI and CO2 LASSI, which take into account whether it’s cheaper for a grower to supplement with carbon dioxide or with light.

David Kuack is a freelance technical writer in Fort Worth, Texas; dkuack@gmail.com.
Visit our corporate website at https://hortamericas.com.