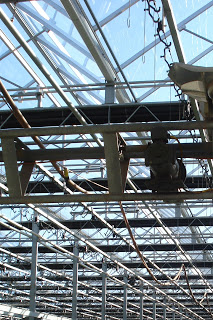 Although growers who use boom lighting may not know
exactly how much light they are delivering to their plants, they know it is an
efficient and cost effective way to control photoperiod.

By David Kuack
Growers have been using artificial lighting to control
plant photoperiod for over 50 years. Initially growers installed incandescent
lamps for photoperiod control. The lamps were used to either keep short day plants
from flowering or to hasten flowering of long day plants. Growers started using
constant light for different periods during the night.
“At some point the industry and research zeroed in on a
four hour night break,” said Royal Heins, senior technical specialist at Fides Oro. “Lack of electrical service to provide incandescent lighting to the entire
greenhouse at one time led to the need to determine if plants needed to be
lighted continuously during this time period. Research was done and the
recommendation was made that plants should be lighted 20 percent of the time
with a maximum cycle of 30 minutes.
“What was developed was cyclic lighting where one part (20
percent) of a greenhouse would be lit for six minutes and then the lighting
would cycle to the next 20 percent and so on so that within 30 minutes the
lighting would be back to the area where it had started. This cycling would
occur during four hours during the night. This enabled growers to light five
times the area of greenhouse during the night using the same electrical
service.”
Heins said that research also found that 10 footcandles
of incandescent light was sufficient to prevent flowering of short day plants
like chrysanthemums and poinsettias as well as being able to promote flowering
of long day plants like petunia.
Boom lighting uncertainties

Heins said growers who use stationary cyclic lighting in
their greenhouses to prevent or promote flowering know how much light to
deliver and its duration.

“It is relatively easy using stationary cyclic lighting
regardless of whether a grower is producing short or long day plants,” he said.
“What has complicated the issue is growers are now using moveable booms
equipped with lights to create a photoperiodic response. The question becomes
how do growers know whether enough light is being delivered to their plants?
“Research with boom lighting is difficult to do because a
boom delivers light in a cyclic pattern where the light intensity goes from
zero to a maximum level and then back down to zero. How fast does the boom
travel and how bright is the light when the boom comes over the plants
ultimately determines if sufficient light is delivered to provide the desired
photoperiodic response.”

Adding to the difficulty of determining the proper light
level and duration with boom lighting is the variable length of greenhouse
bays.

“When the boom goes over the plants in the middle of the
bay and then comes back there is a periodicity that is very regular,” Heins
said. “For example, for plants in the middle of the bay it may take 2½ minutes
to go from one end of the bay and then another 2½ minutes to go back. This
results in the plants receiving light every 5 minutes. However, for plants at
the end of the bay it’s going to take 10 minutes before they receive light
again. Trying to manage light delivery with different periodicities based upon
where a plant is located and trying to conduct research based on plant location
is very difficult to do.”
Heins said another factor that growers must consider if
they are planning to install boom lighting is that there is a qualitative and
quantitative response to photoperiodic lighting.
“The qualitative response is that the plant either
flowers or it doesn’t flower,” he said. “That’s simple and straightforward.
With the quantitative response going from no photoperiodic lighting to a
saturated level of photoperiodic lighting, there is a progressive enhancement
of time to flower. As light is added a threshold is passed where the plant
flowers earlier. As more photoperiodic light is added the plant flowers
progressively earlier.
“Growers who use boom lighting to flower long day plants may
know it works. What they don’t know is if it is working as efficiently as
possible. We don’t know if additional light is provided if the plants would
flower even earlier. The growers just know that the plants flowered earlier than
what they would have flowered under natural light conditions.”
Real world experience

Julie Iferd, head grower at Catoctin Mountain Growers in
Detour, Md., said her company has always used some type of photoperiodic lighting.
Initially the company installed fluorescent lights on its irrigation booms, but
most of those lamps have been replaced with metal halide fixtures. The company
grows primarily annuals, garden mums and poinsettias for big box stores,
grocery stores and landscapers.

“The boom lighting we are using is primarily for
photoperiodic control to either keep plants from flowering or to initiate
flowering,” Iferd said. “It depends on the time of year as to what crops we are
lighting.”

In the spring Iferd said short day plants, such as
celosia, are lit to prevent them from flowering so the plants can be bulked up.
Long day plants, like petunia, calibrachoa, verbena and lobelia, are also lit
to initiate flowering.

Iferd said one metal halide light fixture is installed at
the center of each irrigation boom truss to provide a more even light
distribution pattern across the greenhouse bay. She said some growers choose to
install two light fixtures per boom to deliver a higher light intensity and to
ensure plants at the edge of the bays receive as much light as those in the
center. When installing light fixtures on booms, Iferd said growers should be
aware of overhead equipment and plants such as hanging basket irrigation
systems to prevent any collisions.

“We have found that one metal halide fixture in the
center of the boom is adequate in our 33-foot wide by 300-foot long bays,”
Iferd said. “We have used a light meter to take measurements at the edge of the
bays with black out curtains closed. Even at the farthest distance from the
fixtures the light is perceivable. Also, we have not seen any difference in the
growth pattern between plants in the center and edge of the bays. What we
expect the lights to do, whether it be to keep the short day plants from
initiating flowers or to initiate flowering of long day plants, the lights do
that uniformly across the bays.”

By using the boom lighting Iferd said there are no
stationary light fixtures that can cast shadows on the plants.
“With the boom lighting there is only one lighting
fixture attached to the boom, which is constantly moving, so there isn’t the
concern of causing a shadow effect,” she said. “We have the flexibility of
being able to move the booms where we want them to be. We can also be selective
in what areas and what plants we light. We don’t have to light an entire
300-foot bay. If we had set up the greenhouses with stationary metal halide
lamps, we would have needed a lot more fixtures. That would have been very costly.”
Lighting different
crops

Iferd said when the lights are operating the booms
usually move at a speed of 20 feet per minute. She said depending on their design,
some of the booms can move at even a slower rate.

“We move the booms as slow as we can without having them
getting caught up on a weld,” she said. “Moving the booms as slowly as possible
enables the plants to receive the most amount of light during each pass.”
The time of day that the lights are operating depends on
the plant species.
“For those plants that we are providing a night
interruption that usually occurs between 10 p.m. and 2 a.m.,” Iferd said. “Because
of the length of the bays we do extend the period that we light our mums. We
run a boom in a 100-foot section for four hours and the then move the boom and
run it in another 100-foot section for four hours and so on. For species like
begonia and dahlia we want to give a day length extension to provide 13-14
hours of light. For these we do the day length extension at the end of the day.”

David Kuack is a freelance technical writer in Fort
Worth, Texas;
dkuack@gmail.com.