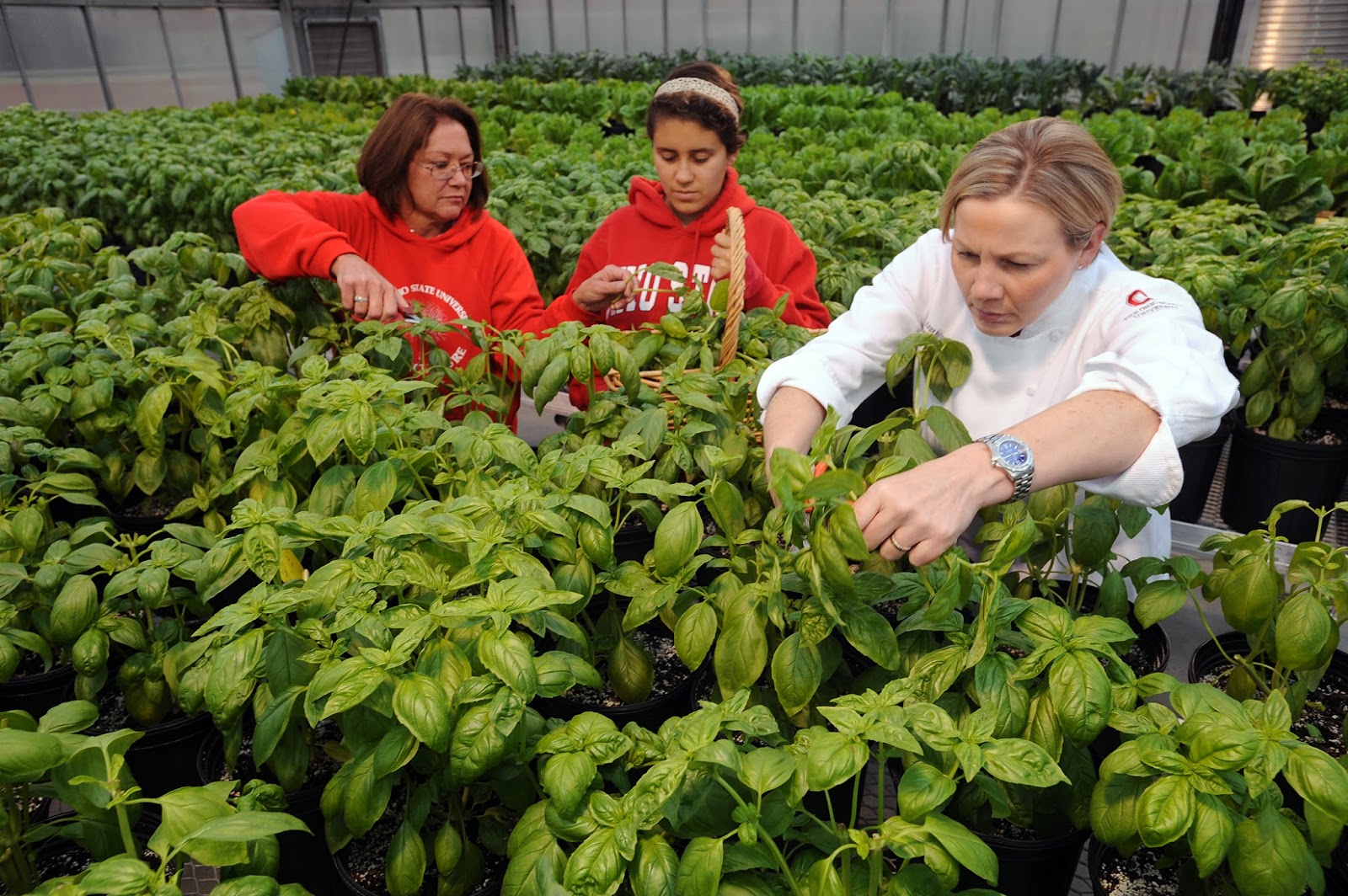 Ohio State University corporate executive chef Lesa
Holford has started growing edibles in a campus greenhouse for use in food
prepared for the school’s dining facilities.

Since August, kale, basil and romaine lettuce have been
growing in an Ohio State University College of Agriculture greenhouse. These
crops aren’t part of a research project. They are being grown for use in the
preparation of food served at several campus dining facilities.

“We are growing about 1,200 plants,” said university
corporate executive chef Lesa Holford. “About 70 percent of the plants are
kale, 15 percent are basil and 15 percent are romaine. The plants were started
in August. We are still harvesting from the original kale and basil plants. In
late October we put in a second planting of 240 romaine plants.”
A learning experience

Holford, who has no formal training in plant production
other than her own backyard garden, said the project has been a learning
experience.

“I randomly chose the crops that we are growing,” she
said. “I’m now looking to ask people in the College of Agriculture their
recommendations for additional crops. I’m interested in trying crops that might
have greater yields. I’m learning as I go.”

Holford has received assistance in producing and
harvesting the plants from the faculty and staff in the College of Agriculture.
“Greenhouse coordinators Jim Vent and Elaine Grassbaugh
are some of the people who are working with me,” Holford said. “They have shown
me how to harvest the crops. This includes where to cut the basil, how to
harvest the kale so that it continues to grow and how to cut the romaine so
that its leaves don’t start to turn yellow.
“They showed me how to germinate the seeds in a misting
room. They explained to me when to take the seedlings out of the misting room
and move them into the greenhouse to acclimate them before planting. I
initially grew the basil with the romaine. I now understand why you don’t put
warm temperature crops with cold temperature crops. It’s been an atmosphere of
learning and that’s what has been great.”
Utilizing university
ag products, facilities

Holford said the idea for growing in the greenhouse
evolved from using other ag products produced at another campus facility.

“We were using a lot of beef and pork products from the
university meat lab,” she said. “We actually reached the point where the lab
couldn’t produce enough of what we needed. So then we started tapping into the
student-run Waterman farm complex.
“I told the farm staff if they could grow it, we could
use it. We were buying produce from the farm, primarily lettuce. The quantities
were a little unpredictable. That is another reason why we decided to start
this project with the College of Agriculture. It gave us the opportunity of
learning while growing the food. It also gave us the opportunity to grow something
we had more control of. Being able to have more control over the food that we
offer our students is important.”
Holford said she hasn’t had any major challenges
producing the plants.
“We had some aphids that infested the terminals of a few kale
plants,” she said. “It wasn’t a major outbreak. We used an organic
horticultural oil to control the aphids.”
Fresh food
preparation

Holford said she decides what recipes the produce that is
harvested goes into.

“The produce is sent to the university’s central
production kitchen where it is used to make different foods served at various
locations around campus,” she said. “I usually deliver the produce when we have
enough to harvest.
“About 15-20 pounds of kale goes into the kale and bacon tarts
that are sold in six Grab ‘n Go cafes. The basil goes into the pesto that is
used to make Grab ‘n Go caprese sandwiches that are sold all over campus. The
romaine goes into Grab ‘n Go Caesar salads that are sold in about 20 different
dining locations.”
Holford said more than 260 pounds of produce has been
harvested from the greenhouse.
“When we started to harvest the crops it was once a week,
but that has slowed down because of the weather,” she said. “The basil, in
particular, has really slowed down.”
Student
involvement

Prior to starting the project, volunteer help was
solicited from the student body to assist in the watering of the plants. Sustainable
Plant Systems Horticulture student Kathryn Losnes was hired to assist in the
growing and to coordinate the schedule of volunteers to water the plants.

“We had over 20 students who volunteered to water the
plants,” Holford said. “They are from various majors. We have a couple of
students who signed up from a vegetarian focus group. Some are from the school
of horticulture. Some of them just wanted to volunteer to work in the
greenhouse and grow the plants. We conducted an orientation so that the
volunteers could learn how to water the plants.”
Expansion plans

Based on the success Dining Services has had growing in
the greenhouse, Holford said she would like to expand the program to grow more
produce.

“I’m hoping that we will be able to expand production by next
summer,” she said. “We are looking at several options. We may be able to get
more bench space in the greenhouse we’re currently growing in. There may also
be an opportunity to put up a high tunnel next to the greenhouse or to put up a
high tunnel at Waterman farm or perhaps both. There are also some high tunnels
at the university’s Wooster campus that could be brought to the Waterman
facility, which is only 2 miles away from the greenhouse we’re using now.”
Holford said another future opportunity would be to
involve students in the university’s Culinary Science program in the project.

David Kuack is a freelance technical writer in Fort
Worth, Texas; dkuack@gnail.com.