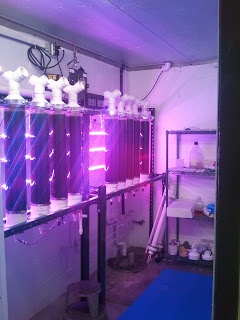 Researchers at the University of Kentucky are using a greenhouse and LED lights to study the feasibility of growing algae with flue gas from coal-burning power plants to reduce greenhouse gas emissions.

Algae are considered a nuisance by commercial greenhouse growers. The warm, moist conditions that occur in greenhouses provide the ideal environment for algae growth.
Algae can be found anywhere these conditions exist, including floors, walkways, under and on benches, on greenhouse glazings and walls, in irrigation pipes and emitters and misting lines, on the surface of evaporative cooling pads and on the surface of growing media in containers and ground beds. Algae can also be a food source for fungus gnats and shore flies. But algae also hold great potential in the production of value-added products.
Even though algae are a problem for growers, these simple green plants hold great potential in the production of biofuels, fertilizers, cosmetics, fish and animal feed and other value-added products. Members of the algae program at the University of Kentucky in Lexington are looking at the potential of algae production to help lower the emission of greenhouse gases, primarily carbon dioxide, from the burning of fossil fuels, particularly coal.
Andy Placido, an engineer associate with the university’s Center for Applied Energy Research, said the restrictions on greenhouse gas emissions will only increase as environmental issues gain in importance among the public and government and regulatory officials.
“Kentucky’s Department of Energy Development and Independence is always looking for ways to make coal cleaner because it is a big part of the state’s economy,” said Placido. “State officials know that there is eventually going to be some type of restrictions or tax on greenhouse gas emissions. Coal produces more carbon dioxide per energy unit than natural gas and other fuels. So officials are trying to evaluate the technology that is available to reduce greenhouse gas emissions.”

LED lights and a greenhouse
Placido said the algae culturing system starts in the laboratory where the algae are allowed to multiply.
“We work with the university’s Department of Biosystems and Agricultural Engineering which maintains the algae strains in beakers,” he said. “The algae are purchased in small vials and then cultured up to a few hundred milliliters.”
Placido said this is when he and the other researchers start to work with the algae in an in-house designed culture closet equipped with Philips LED lights.
“We are growing algae indoors with temperature control,” he said. “We are starting to bubble in 5 percent carbon dioxide to allow the algae to acclimate to a higher percentage of carbon dioxide along with the LED lighting as we prepare to move the algae into the sunlight. When there is enough algae that have acclimated (0.05-0.1 gram of algae per liter of water), they will be taken from the culture closet to the greenhouse. In the greenhouse, it will still be a temperature-controlled environment. We’ll allow the algae to grow in the greenhouse and once they become accustomed to the higher light levels and change in temperature, we will take the algae out to the power plant where it will be exposed to outdoor conditions along with the flue gas. That is our algae process chain.”

Maximizing algae growth
LED lights are being used 24 hours a day in the culture room to provide constant light. Placido said they are also looking at using the LEDs outside as a supplement at night and possibly during winter at the power plant so the algae continue to grow.
“During the night algae start to respire during which they release carbon dioxide and take in oxygen,” he said. “This is the reverse process of what happens during the day. By using the LEDs we can keep the algae growing for 24 hours or at least reduce the respiration process. Because the LEDs are very efficient, we expect more algae will be produced than the energy needed to operate the lights.”
Placido said algae split when they grow so production is judged on doubling time. Under optimum light and temperatures in the lab a doubling time of 12-24 hours is achievable.
“With the outdoor conditions we will have with the flue gas, we are hoping to have a doubling time of two to three days,” he said. “We would like to increase the growth rate, but that is going to take some nutrient work along with optimizing the light and temperature levels. Outside we’re at the mercy of Mother Nature.”
Placido said algae growth is much better with the LEDs in a controlled environment than outside under natural conditions. He said the difference in growth comparing inside and outdoor conditions has not been quantified.
“We have gotten much greater algae growth rates inside in the culture closet equipped with LEDs than outside or in the greenhouse even under the best days in regards to light and temperature,” he said.

Real world use
Placido said when the system is set up at the power plant, more flue gas will be produced than can be used to grow the algae. The flue gas will be pulled into the photo-reactor, which is a series of glass tubes on a steel frame, as carbon dioxide gas is needed.
“Once the system is saturated with carbon dioxide, the algae will be allowed to grow and then will be harvested. More carbon dioxide will be added as it is needed,” he said. “We know that our reactor isn’t nearly big enough to capture all of the carbon dioxide. The reactor we are using only holds about 2,000 gallons of water. That’s a good size, but nowhere near the size we would need to capture all of the carbon dioxide. We have estimated to capture all of the carbon dioxide from this one power plant would require a reactor that would cover 100 acres and take millions of gallons of water.
Placido said the power plant can provide an unlimited amount of steam to keep the water in the reactor tubes from freezing during the winter.
“During the winter with the sun’s heat during day the water temperature would stay above freezing,” he said. “With the steam from the power plant to heat the water along with keeping the water circulating continuously, that should be enough to keep the system from freezing. Then we would supplement the natural light with the LEDs if it was needed.”

Grower potential
Placido said there are some possibilities for commercial growers to produce algae and use algae in the future.
“That is our goal, to find out how we can improve the process for making fuel and how does that compare with other algae-derived products, such as fertilizers, animal feed, etc.,” he said. “Our end goal is to make biofuel. In the future the ideal situation would be for growers to produce their own energy source.”