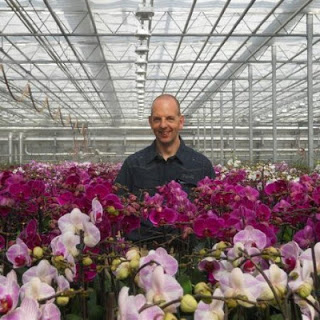 John Pieterse, head grower of orchids at Mid-American
Growers, talks about some of the differences and challenges of growing in the
Netherlands and the United States.

By David Kuack
When John Pieterse left the Netherlands just over two
years ago to become head grower of orchids at Mid-American Growers in Granville, Ill., he knew that he was going to face some challenges. Prior to
the move to the United States, Pieterse had successfully operated his own cut
rose production facility in Moerkapelle, the Netherlands, for 10 years. After
selling his business in 2009, he went to work in February 2010 for a neighboring
company SO Natural Orchideeënkwekerij growing
potted orchids. It was during his time with SO Natural, which assisted
Mid-American Growers and Green Circle Growers in Oberlin, Ohio, in setting up
their orchid production facilities, that Pieterse got his first exposure to
living and growing in the Midwest.
“When I was 18 years old, I worked as a trainee at a
greenhouse operation in Florida for three months,” Pieterse said. “I thought
the U.S. was an amazing country. If ever I had the chance to come over and work
here, I would take the opportunity.”
That opportunity came when Nick van Wingerden, owner of Mid-American
Growers, asked Pieterse, who had visited the operation twice during 2010, if he
would accept the position of head grower.

“During my visits to Mid-American I was quite impressed
and I thought this was something that I could do,” he said. “My wife was also
in favor of the move. It took about a year for us to complete the paperwork.
During that time I was able to learn more about the orchid business in the
Netherlands.”

Pierterse said since the orchid production methods used
at Mid-American are similar to the ones that he used in the Netherlands the
transition went relatively smoothly. He now oversees 8 acres of phalaenopsis orchid
production.
“I quickly realized the need to be flexible, nothing is
exactly the same, but overall the way the orchids are produced here is the same
way I was growing them in the Netherlands,” he said.
Climate
differences

Pieterse said that the climate in the Netherlands is
influenced by the North Sea. The sea borders the northern and western parts of
the country.

“The sea climate is very stable so there are a lot of
days that are similar in regards to temperatures and light levels,” he said.
“It is a very easy climate to grow in because it is so stable. There are not a
lot of differences in the temperature and it is cloudier.”
One of the first things that Pieterse learned about the
weather in the United States was the major fluctuations in temperature.
“In the Midwest the weather changes can be drastic. The
differences in the weather can occur from week to week, from day to day or even
from the morning to the afternoon,” he said. “It’s not surprising to have the
temperature go from 51ºF
one day to 20ºF the
next. And the light levels here in January can be higher than the light levels
during May in the Netherlands. You have to really pay attention to the climate
and the changes that can occur because they can occur so quickly.”
Increasing public,
government pressures

Pieterse said the overcrowding that has occurred is some
areas of the Netherlands has made the availability of clean water a major
issue. In order for Dutch growers to continue operating they have had to learn
how to minimize the amount of water they use to produce their crops, to recycle
and to capture the rain water off of the greenhouses.

“Since there are so many people now living near the
greenhouses, the growers have no other options but to conserve, collect and
recycle,” Pieterse said. “Also, because of the concern with water quality and
contamination, there are many chemicals no longer available to growers. In the
U.S. there are many more chemicals available that can’t be used by growers in
the Netherlands.”
The restrictions on chemical use in the Netherlands have
forced growers to turn to biological controls. In cases where biologicals have
not been as effective in controlling some pests, growers have eliminated
producing some crops.
“Poinsettia growers in the Netherlands can have issues
with whitefly control,” he said. “The growers have only a couple of chemicals
available to control whitefly. For some growers who feel the current chemicals
and biologicals aren’t effective enough to produce a good poinsettia crop, they
are changing to other crops. That is happening with other crops too. Once a
grower has to throw away part of his crop because he doesn’t have the chemicals
he needs, it’s not difficult to switch crops since he’s not making any money.
The growers feel they don’t have the necessary chemicals available because of
the regulations.”
Pieterse said the increase in regulations is just part of
the overall disinterest the Dutch government has for horticulture and the agriculture
industry in general.
“Many government officials don’t seem to be concerned
about passing regulations that impact horticulture and whether or not growers
are able to continue to grow their crops,” he said. “This probably occurs more
with horticulture, but even those involved with agriculture, are feeling the
pressure and moving to other countries. With all of the regulations, it’s
difficult to raise chickens, cows and sheep and make any money.”
A feel for the
market

Pieterse said the one of the major differences between
the U.S. and the Netherlands is the growers’ knowledge of the market. Dutch
growers don’t have the same direct contact with their customers the way that
most U.S. growers do. A lot of product in the Netherlands is sold through the
auctions and is shipped to surrounding countries.

“Europe is made up of many small countries,” he said.
“For transporting flowers into these countries, there are special distributors
or exporters that buy the products at the auctions and then ship them to
various retailers. There is this middle layer of distributors.
“The Dutch growers aren’t really growing for a particular
customer. A lot of growers specialize in just one crop or even one variety.
This can make it difficult for the growers to know what the market really
wants. Growers don’t necessarily know for sure if they can sell the plants they
are producing. Once the crops are taken to the auctions, the exporters buy
plants from different growers so that they can ship their customers a mix of
products.”

Pieterse said the meetings between U.S. growers and the
retailers allows growers to know what the market wants.

“Talking directly with a buyer from Aldi, Home Depot or
Walmart, growers know what the retailers want, what the market wants,” he said.
“In the Netherlands there are hundreds of small growers. Here in the U.S. there
are much larger growers who grow a wider assortment of plants. It’s easier for
the retailers to deal with fewer growers who can provide a variety of plants. It
makes it much easier for the retailers.”
Since there are so many smaller growers in the
Netherlands and no industry-wide plant specifications, Pieterse said there can
be a lot of variability in the products that are sold at auction.
“In the Netherlands if you buy mums from four different
growers they may be different in size, variety and flower type. Here in the
U.S. that is not a concern because the growers and retailers discuss what is
going to be produced. Here the growers take care of those details along with
the shipping of the finished plants.”
For more: John
Pieterse, Mid-American Growers, johnp@midamg.com; http://www.midamg.com.
David Kuack is a freelance technical writer in Fort
Worth, Texas; dkuack@gmail.com.
Visit our corporate website at https://hortamericas.com.