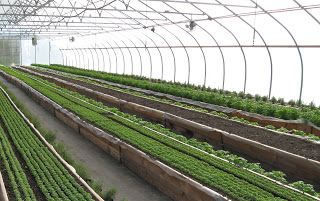 Growers of ornamental plants can use empty greenhouses during winter to produce a variety of edible greens.

Ornamental plant growers who close down their greenhouses for the winter may consider using an empty house to produce an alternative crop such as greens during the winter months. Production systems range from high tech hydroponic systems for lettuce to growing mixed greens in ground beds using minimal or no heat. Researchers in the Department of Plant Science at the State University of New York (SUNY)–Cobleskill, are using existing ebb and flow benching for short-term hydroponic raft lettuce production.
One thing that is common to most greens production systems is the use of a greenhouse structure. Since many greenhouses used to grow spring ornamentals are vacant between November and February, greens may be an alternative crop.

Start small
When growing a crop of greens for the first time, especially if new to vegetable production, begin on a small scale. Growers are advised to research the markets including demands for certain types of greens, harvesting techniques, post harvest handling, storage and packaging. Areas with winter farmers markets have seen a high demand for winter greens, though in some cases the market is getting saturated and competition is high.
Resources are available on growing greens in high tunnels that can be adapted to greenhouse production. It may take some trialing to develop a production system that works for your operation.
﻿

Minimum heat production
Greenhouse growers who produce ornamental crops tend to grow greens in soilless mixes or compost in containers on benches. For production systems that use minimal heat, greens are sown from early September through the first week of October and harvested in November and December.

Scheduling
Planting times are one of the most critical factors for winter harvesting of greens. Successful growers develop planting schedules including expected harvest dates and record yields for future use.
Early sowing is necessary because greens achieve most of their growth before short days lengths and cold temperatures occur. The growth rate slows during the winter months due to cold temperatures and low light caused by cloudy weather and shorter day lengths. There is very little or no growth when the day length drops below 10 hours per day, which usually occurs at the end of November through the beginning of February in Massachusetts. If minimum heat is used, winter production of greens relies on the plants making their growth throughout the fall. Recent research at the University of New Hampshire suggests that some species are more sensitive to temperature than to light whereas others such as lettuce are more sensitive to light than to temperature.
One of the keys to success is to plant enough of a crop early in the season to be able to harvest through the cold season. For example, spinach may take several months to grow during colder months. Spinach seed should be sown in September and October so it is nearly full-sized in December and can be harvested through February.
﻿﻿﻿

﻿Types of greens
There are several types of greens that are grown for winter production, including Asian greens such as mizuna and tasoi, kale, lettuce (red and green leaf, oakleaf and romaine), mustards, gourmet cabbages, Swiss chard, spinach, arugula and claytonia.
If you unfamiliar with some of these greens, taste them first and check out recipes for greens that are new to you. This can help with the best way to market the different greens.
Lettuces are not as cold hardy as some other greens and some lettuce varieties are better adapted to cold weather and short days. Seed catalogs can help with specific growing requirements.
Spinach is very cold hardy. However, during the darkest period of winter, spinach grows very slowly. As the day length becomes longer spinach regrows rapidly and some varieties bolt before the end of winter (February or later).
Crucifers, including mustards, raab and Oriental greens such as pak choi and tatsoi, are good choices for cold-weather production. Swiss chard (Beta vulgaris), which is grown for its large tender leaves and rapid re-growth, is cold hardy and productive.
Growers have found it best to plant different varieties in separate production blocks rather than mixed them together, since growth rates and times of maturity are different. Trial several varieties because they may grow better under various light and temperature regimes. Some varieties are quicker to bolt than others. Mixed packages of greens can be created after they are harvested.

Cultural methods
Containers. Greens can be directly sown in a variety of containers. Open seed flats are popular and fit well on benches. Some growers cover the benches with landscape fabric and fill with medium to create one large bed.

Growing media and fertilization. Soilless media or composts are used for growing greens. Organic production requires growing media that have been approved by an organic certifying agent or have been designated OMRI certified. Plants need less fertilizer as the growth rate slows. Avoid over-fertilizing, which can lead to soft growth and aphid infestations.

Irrigation. Automatic sprinklers or hand watering can be used. Irrigate plants in the morning to allow foliage time to dry before temperatures drop at night, especially as the day length shortens. Under short days growth slows and less water is used. Avoid overwatering, which results in soft growth. Soft plants are less able to withstand cold and have less flavor.

Temperature. There are many options when it comes to temperature. Temperature affects the growth rate and also the flavor of greens. For example, arugula has a stronger flavor when grown at warm temperatures. Some growers produce a succession of greens harvesting every 14-21 days (micro-greens) at 50°F nights and 55°F days. Other growers provide minimal heat to maintain night temperatures of 37°F. On warm or sunny days, greenhouses are ventilated or the side walls are rolled up to increase air circulation depending on the structure.
Some growers use ground beds without supplemental heat. Some crops such as lettuce and arugula do not grow well without supplemental heat. Growers who are using high tunnels without heat tend to use row covers laid over crops on cold nights. The covers must be removed during the day to allow the plants to receive light. Greens cannot be harvested frozen and must be thawed before harvesting.

Light. Light affects the growth and flavor of greens. Decreased daylight results in slower growth. Increasing the temperature cannot compensate for the reduction in daylight. Greens tend to have a milder flavor under lower light. Mesclun grown under lower light is lighter colored than when grown under high light conditions.

Pests. Some of the pests that may be encountered when growing greens include downy mildew on lettuce and spinach (two different species of downy mildew). Some newer varieties of spinach are promoted as having resistance to many races of downy mildew. However, this resistance may not be for all races of the disease. Powdery mildew is a problem on lettuce under low light and high humidity conditions. Voles can be also be a problem when growing greens.

Harvesting and marketing. Greens can be harvested using a sharp knife, scissors or manually picked with no tools, one leaf at a time. Growers use both short and long blade knives. Greens can be harvested by either removing outer, larger leaves at regular intervals or by cutting the entire plant within an inch above the growing medium allowing the crown to remain. Leafy crops re-grow and can be harvested again.
Once greens are harvested, some growers move the crop to a storage area to bag them for sale. If the greens are dirty, then they need to be double rinsed and spun to remove excess moisture. Spinach tends to grow close to the ground and may need washing. Growing in a soilless medium or compost in containers on benches can eliminate this step.
Two popular markets for greens are winter farmers markets and restaurants. Many community-supported agriculture (CSA) farms are offering winter shares and some may be interested in buying in greens to add to the winter and storage crops they offer.
Tina Smith is with the UMass Extension Greenhouse Crops and Floriculture Program, (413) 545-5306; tsmith@umext.umass.edu.
This article first appeared in the July-August 2012 issue of the UMass Extension Floral Notes Newsletter.