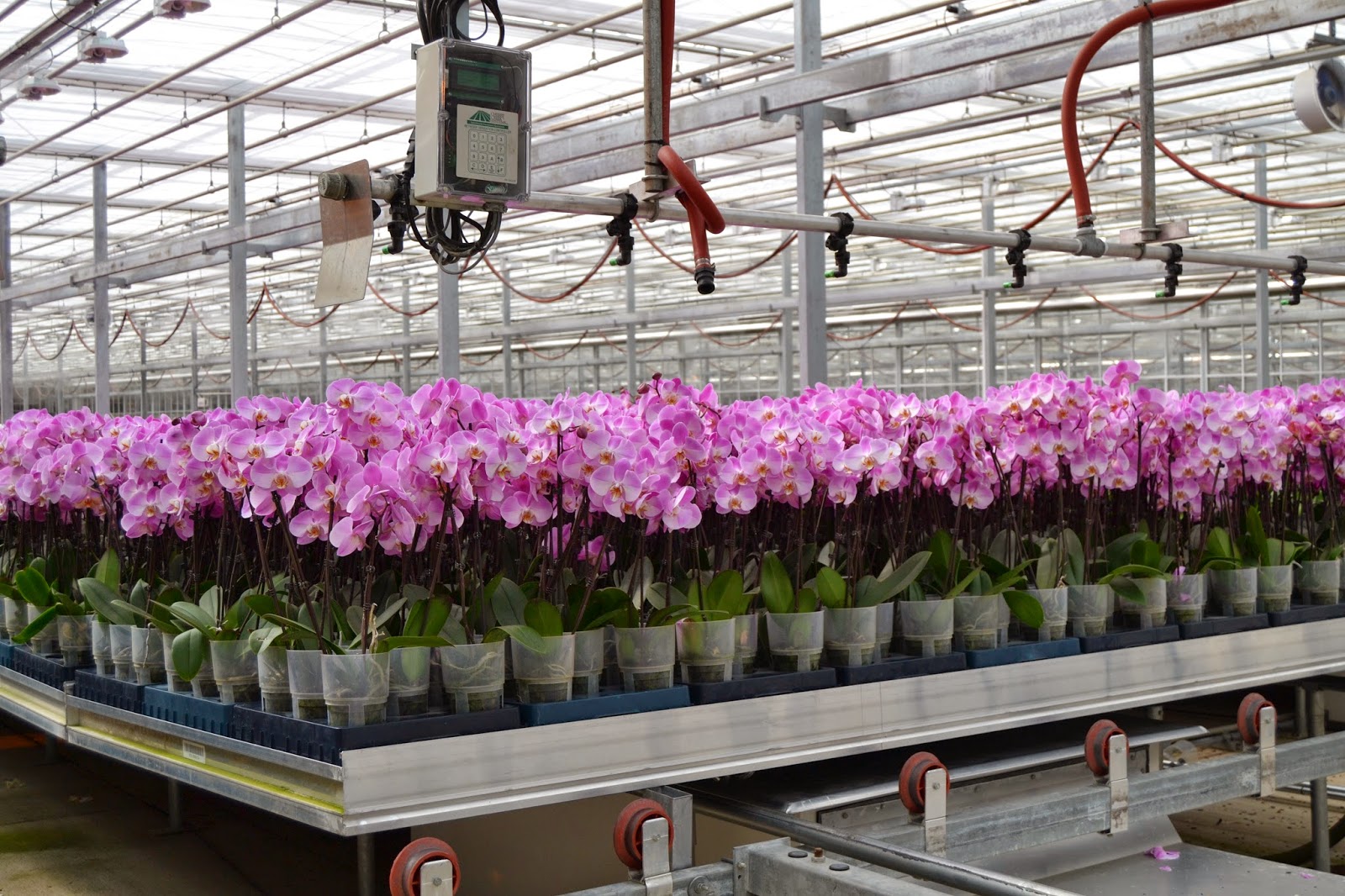 Green Circle Growers continually works to improve and
refine the production environment for the orchids in its “Just Add Ice Orchids”
program.

“We have a high efficiency production system,” said
grower manager Frank Paul. “Everything is standardized. Everything follows a
certain path through our facility.”
Paul said orchids are very manipulative. The greenhouses
are divided into vegetative areas and generative areas. All of the vegetative
areas are at 83ºF
and 65 percent relative humidity. The greenhouses are equipped with a high
pressure fog system for humidity control and also receive supplemental carbon
dioxide.
“Throughout the different vegetative stages of orchid
production the light levels are slowly increased, but the temperature and
humidity remain fairly similar,” he said. “The young plant stage is an average
26 weeks. After the young plant stage, the mature plants in 5-inch pots remain
in a vegetative stage for about 24 weeks before being moved into a cooling
stage.
“Only when the plants are large enough to produce good
quality flower spikes are they moved into the cooling stage. During the cooling
stage, the temperatures are lowered to an average of 70ºF along with an
increase in light levels that initiates the flower spikes. From flower
initiation to shipping is 19 weeks.”
In order to produce plants as uniform as possible, a set
of grading steps was implemented. A camera is used for objective grade
determination.
“Whatever plants are not up to size receive a longer
period of time in the vegetative stage,” Paul said. “Once plants reach the size
that is necessary to produce good quality flower spikes they are moved to the
generative or cooling stage. Our goal is to make the output as uniform as
possible at the highest possible quality.”
Creating the
“perfect” environment

Paul said being able to grow a quality orchid comes down
to the ability to modify the climate conditions to create the perfect growth
environment.

“It is very focused on climate control and climate
control software,” he said. “The first 26 weeks in the young plant stage is by
far the most critical stage. The most important thing is to maintain a stable
growth speed along the way. Disturbances in the growing environment at this
stage can result in a significantly higher percentage of disease and losses.
Those problems can start to a small extent in the young plant stage. Typically
the chances for problems increase once the plants move to the mature vegetative
stage. The problems can be major depending on the level of disturbance
experienced by the plants. That’s why it is so important to keep things stable
at all times. Disturbances include fluctuations in temperature, moisture
levels, soluble salts and pH.”

Grower manager Frank Paul said being able
to grow a quality orchid comes down to the
ability to modify the climate conditions to
create the perfect growth environment.

The greenhouses are equipped with several different
curtains, including indoor and outdoor shade curtains. The outside curtains
help keep the heat out during the summer.

One indoor curtain is primarily for energy savings. The
houses also are equipped with Harmony light diffusion/energy saving curtains.
This white polyester screen brings more light to the plants from all directions
helping to stimulate growth. At night it acts as heat retention curtain.
“Orchids are natural shade plants,” Paul said. “They use
fairly low light levels. They don’t like direct sunlight at all so that is why
we are using the Harmony curtains during the day to diffuse the light.”
All of the greenhouses are equipped with high pressure
sodium lamps. In the generative stage areas of the greenhouses the plants need
higher light levels. The greenhouse curtains are open several hours during the
day in those houses. In the vegetative stage greenhouses the Harmony curtains are usually closed 99 percent of the time.
The HID lamps are used primarily during the winter.
“Phalaenopsis are not daylight sensitive, but we try to
maintain a 14-hour day all of the time,” Paul said. “The lamps help to maintain
stable growth at all times. We usually start using them during the second half
of August and run them for one to three hours every morning, gradually
increasing the operating time toward the shortest natural day in December.”
Sweating the small
stuff

Paul said the greenhouses are very open and equipped with
open-structured benches which allow for greater airflow.

“In order to maintain 70ºF during the summer three large chillers have been
installed that produce 38ºF
water,” he said. “The water is pumped to climate optimizers which help to cool
down the air during the warmer months. The climate optimizers located under the
benches are used for both heating and cooling. They can switch back and forth.
The optimizers over the top of the benches are used for cooling only. The
optimizers are basically large air conditioning units through which either cold
or hot water is pumped. The cooled or heated air is sucked through a radiator
and blown through tubes which distribute the air.”

Climate optimizers located under the benches are used for
both heating and cooling. The optimizers are like large air
conditioning units through which either cold or hot water
is pumped.
Paul said orchids are very sensitive to high salt levels.
The soluble salts (electrical conductivity) and pH of the water are monitored
daily.
“We do frequent soil and water sample analyses,” he said.
“We have an in-house water lab that does weekly analyses of specific elements
in the water.”
Rain water is the irrigation water source and is treated
with chlorine dioxide.
“Rain water is relatively clean, but it is important to
keep the water pipes and irrigation lines clean,” Paul said. “Irrigation water
is the primary source of spreading infection. Chlorine dioxide helps to
suppress pathogens from spreading.”
The greenhouses were initially equipped with boom
irrigation, but Paul has been looking at potentially installing an overhead
sprinkler system.
“The booms are spray bars that move over the tops of the
plants up to 10 times during an irrigation cycle,” he said. “The overhead sprinkler
system is a permanent irrigation line, which provides a steadier flow of water
falling on the plants. Overhead irrigation is more constant and allows the
water to flow down through the growing medium and along the sides of the pot
for better leaching. The medium for the finished plants is a mixture of bark
chips and sphagnum peat. Foam is added to the medium in the young plant stage
for the first 26 weeks. All of the drain water is collected into ponds and
reused on other plants in our facilities. It is not reused on the orchids.”
Paul said growing issues with orchids are not seasonally
related. Diseases are the biggest challenge.
“Pseudomonas and Fusarium are very common diseases in
orchid production,” he said. “Pseudomonas is a bacterial disease associated
with the foliage. Fusarium is a fungus that attacks the crown of the plant.
Unstable growth makes the plants more susceptible to these diseases. If the
plants are kept wet too long that makes them more susceptible. Phalaenopsis has
to be dried out before going into the night.”
Paul said the best defense against everything for orchids
is maintaining a healthy plant.
“Creating the ideal conditions for a healthy growing
plant is our main focus,” he said. “Once you get away from that, diseases and
insects become more of a problem. It’s all related to keeping the plants
growing healthy and active at a steady pace all of the time.”
Expanding the Just Add Ice program

The company has expanded the program with mini-orchids,
anthuriums, bonzi, bromeliads and Pachira
aquatica, called the money tree.
“The mini-orchids account for 10-15 percent of our orchid
sales,” said grower manager Frank Paul. “We are looking to grow the
mini-orchids to 30-40 percent of the program’s sales in the next couple years.
The mini-orchids are also phalaenopsis species.”
The mini-orchids follow similar steps to the other
phalaenopsis, but conditions slightly vary. Because the growing medium is
different for the mini-orchids, there are different requirements regarding
fertilization, irrigation and the cooling process for spike initiation.
Paul said the greenhouses being used for orchid
production are also suitable for anthuriums and bromeliads. Although these
tropical plants finish in about the same time (10-11 months) for the mature
plant stage as the phalaenopsis orchids, they do not follow the same production
schedule. He said the greenhouses designated for phalaenopsis are only used for
orchids.
“The anthurium and bromeliad crops could be grown in the
orchid greenhouses,” he said. “However, because each of these crops requires
its own specific climate conditions and its own specific climate conditions and
has a unique production schedule, we dedicate specific greenhouses to one crop
only.”