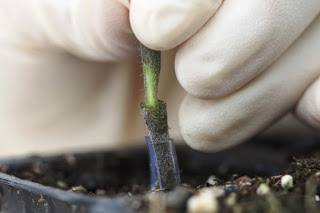 Controlled-environment growers have long known the
benefits of grafted plants. Field growers are quickly learning them too.

By David Kuack
Plant grafting of plants has been done for thousands of
years. Preparing and using grafted vegetable plants is common in Asia, Europe
and other regions and is gaining use in North American production systems. North
American greenhouse and high tunnel growers were the first to use grafting most
routinely, but field vegetable growers are showing increased interest in the
benefits grafting has to offer.
Grafting joins the root system of one variety to the
shoot of another variety to create one “hybrid” plant. The plant used for its
roots is called the rootstock. The plant used for its stems and leaves to
produce marketable fruit is the scion.
Matt Kleinhenz, professor and extension vegetable
specialist at Ohio State University-OARDC in Wooster, Ohio, said the number of
vegetable crops that are being grafted is steadily climbing.
“Currently the core crops include tomato, watermelon,
cantaloupe, pepper, cucumber and eggplant,” Kleinhenz said. “These crops are
grafted for various reasons, including their financial value and because their
production can be limited by issues that grafting can address.”

Advantages of
grafted plants
Kleinhenz said there are a number of potential benefits
provided by grafting. These benefits apply to both the person who creates the
grafted plants and the one using them.

“The broadest description of the benefits of grafting may
be that it makes better use of genetics in production,” he said. “Single commercial
fruiting varieties are often hybrids. When developing them, the breeder attempts
to incorporate most or all of the traits that matter into each one. That
process is resource demanding. It takes time and money. It’s technically
challenging and it always involves compromise. Each and every variety is
imperfect in some way. A variety may be better than its predecessors, but it is
still imperfect in some way.”
Kleinhenz said there a number of ways in which hybrid varieties
can be imperfect. They can be less resistant to soil-borne diseases or
deleterious nematodes. They can use water or nutrients inefficiently. They can
be susceptible to various forms of abiotic (nonliving) stresses including cold,
heat or salinity.
“Instead of incorporating all of the desirable traits
into one variety, grafting creates an instant combination of two varieties,” he
said. “The attributes of the two varieties are specifically chosen, but there
is no attempt to blend them into one particular genotype, as in traditional
hybrid development. Instead, grafting provides the best of both varieties by
splicing them together. Through that splicing a new “physical” hybrid is
created for use in that production season only.”

Kleinhenz said traditional development of a standard
hybrid must overcome barriers to the crossing of the parents, the movement of
traits from one plant to another and the possibility that bad traits tag along.

“In grafting, two varieties must be compatible to be
grafted,” he said. “Grafting allows for the bypassing of difficult and
time-consuming steps that are required to create a superior variety that is
good from top to bottom. For this reason, grafting may increase both the range
of traits available to growers and the speed into which they come onto the
farm.”
Kleinhenz said in those systems that rely heavily on
grafting, scion varieties are bred to produce high quality fruit and rootstock
varieties are bred to power the scion. The scion does not need to resist or
tolerate soil-borne stresses and the rootstock does not have to produce
marketable fruit.
He said grafting combines two excellent varieties in a
matter of seconds. However, an average of two to three weeks may be required to
prepare the seedlings to be grafted and to allow newly grafted plants to heal
before transplanting them.
Grafting potential

“Grafted plants are primarily used to limit losses due to
soil-borne diseases and deleterious nematodes,” Kleinhenz said. “Grafted plants
have shown the ability to limit losses caused by organisms that attack the root
system or the lowest shoots just above the soil line. Grafted plants are not
widely used to combat foliar or fruit diseases such as late blight of tomato
that essentially attack the shoot well above the soil line. Foliar disease
management is still primarily the responsibility of the scion.”

Kleinhenz said grafted plants have also performed well under
less than ideal growing conditions.
“Tests completed where soil salinity was high, where soil
moisture was excessive, and when soil temperatures were low have demonstrated
the high potential of grafted plants,” he said. “Grafted plants have also
out-yielded ungrafted ones when conditions were good and they have been able to
use water and fertilizer inputs more efficiently. Researchers and farmers are
testing the performance of grafted plants worldwide under many conditions to
discover where and when using them makes the most sense.”

Kleinhenz said the preparation and use of grafted plants
is market-driven.

“If users see the benefits, suppliers will offer them,”
he said. “Potential suppliers will be reluctant to prepare large quantities of
grafted plants until they are confident people will buy them.
“I recommend that potential users try them. Local
suppliers and extension personnel can assist in getting started. Growers can
also prepare their own grafted plants with just a little practice. Hands-on and
free web-based training guides are widely available.”
Playing catch up

The use of grafted vegetable plants in soil-based
production systems is much more common outside North America.

“The current cost of grafted plants, unfamiliarity with
the full benefits of using them, not being sure how to use them and their
occasionally inconsistent performance may explain the situation,” Kleinhenz said.
“Early adopters are already fairly convinced. Others are taking a more
wait-and-see approach. Adoption curves for new practices and technologies tend
to be similar. The benefits have to be clear, consistent and compelling to a
core group of growers. Then, word spreads.”
Kleinhenz said even though grafting is not new, until
recently there have been limited resources available in North America for
widespread and intense evaluation.
“The demand for alternative disease management strategies
and vigorous and resource-efficient crops is high,” he said. “New rootstock
varieties are available. More and more people have at least heard of grafting,
grafted plants themselves and/or grown grafted plants. And, the pool of
research-based information to aid growers is expanding.”

Learning how to graft
The “Grafting Guide,”
available from Ohio State University-OARDC, offers a detailed, easy-to-follow
look at the entire process of grafting. It would be of interest to both
inexperienced and experienced grafters.
This comprehensive pictorial guide discusses the splice-and-cleft
graft method for tomato and pepper. It provides information on selecting
rootstocks and how to evaluate the suitability of grafted plants for use in
field and high tunnel production.
Included in the guide are a tomato rootstock table, seeding
calculator, stem diameter chart, seed treatment fact sheet, healing chamber
design and other reference materials. New additions to the guide will be
prepared as experience and research-based information become available.

The 2nd annual Vegetable Grafting Symposium will be held Nov. 6, 2013, in San Diego, Calif. The event is being convened by
a USDA Specialty Crop Research Initiative-Supported University-USDA-Industry
Team hosted by the Annual International Research Conference on Methyl Bromide
Alternatives and Emissions Reductions.

The symposium’s objectives include:

1. Summarizing the current status and expected future of
grafting as a technology for enhancing U.S. vegetable production systems
related to profit, resource efficiency and sustainability.
2. Increase the understanding of challenges and
opportunities associated with preparing and using grafted vegetable plants.
3. Strengthen and diversify partnerships required to
widen the application of vegetable grafting as cornerstone technology.
4. Describe the USDA-Industry Team’s goals and approaches.