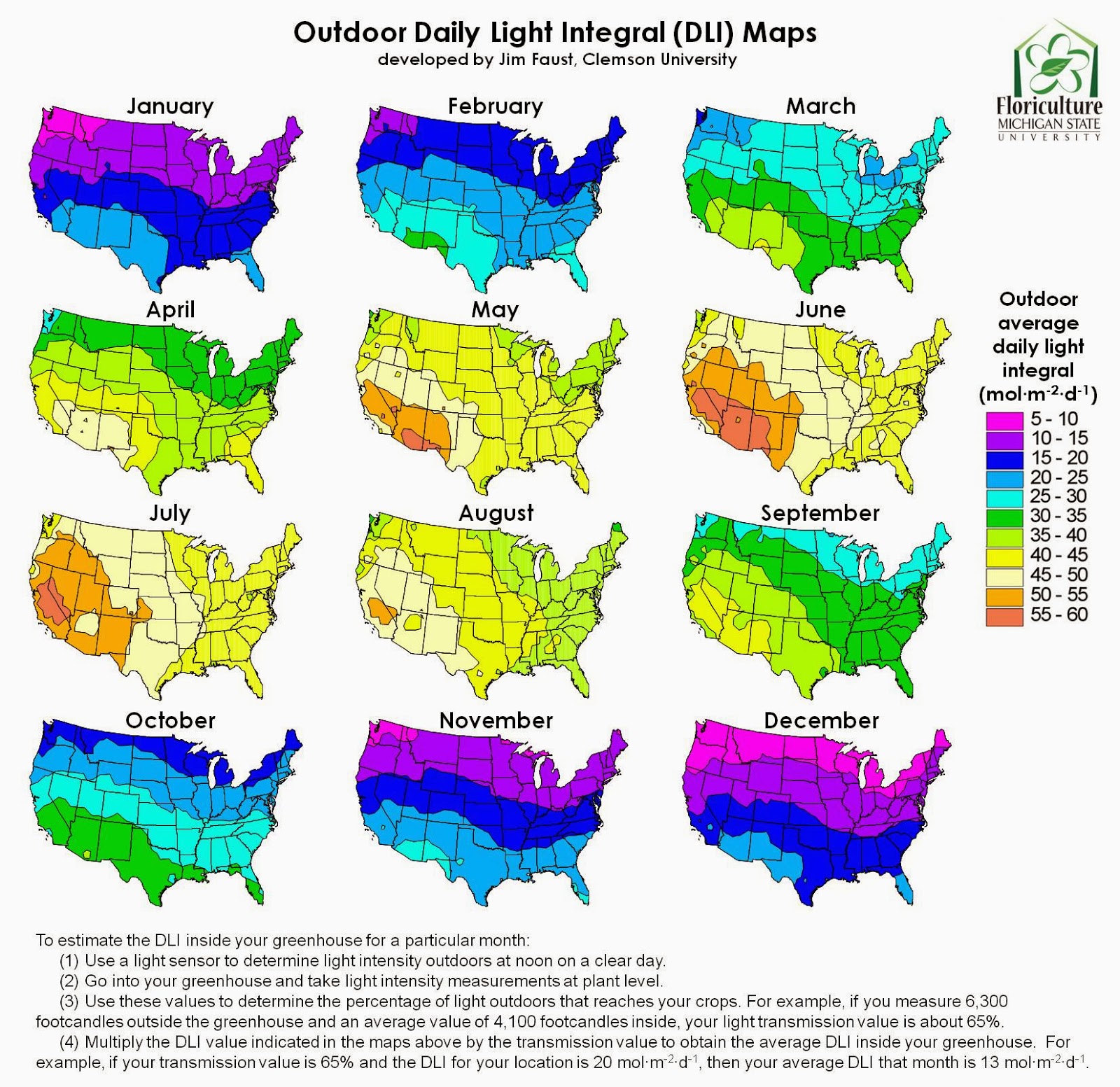 Measuring daily light integral (DLI) provides a more
accurate reading of the amount of photosynthetic light being received by
plants.

“When you think about light over the course of a day,
light is extremely dynamic,” said assistant horticulture professor Chris Currey
at Iowa State University. “From sunrise to sundown, there are variations in
light. If growers take a single light measurement early in the day, they may be
underestimating the amount of light. Alternatively, if the light measurement is
made later in the day, growers may be overestimating the light level.
Instantaneous light levels change over the course of a day.”
Visible light vs.
photosynthetic light

Currey said another issue with measuring light with a
footcandle meter is that it measures the light that is visible to the human
eye.

“The sun produces a broad spectrum of light,” he said.
“Photosynthetic light, which is the light plants can use for photosynthesis and
is defined as photosynthetically active radiation (PAR), is the light that
occurs between 400 and 700 nanometers. So if a footcandle meter measures light
that is visible to the human eye, this includes wavelengths outside of PAR.
Consequently, footcandle measurements tend to overestimate the amount of light
for plant growth.”
More accurate
measurement

Currey said it is the total amount of photosynthetic
light that is going to impact how a greenhouse crop is going to grow.

“Daily light integral (DLI) is the sum of photosynthetic
light over the course of a day,” he said. “In production situations where there
is a static light source it is relatively easy to determine the DLI. Examples
of a grower producing a crop under a static source of light include growing
plants under high pressure sodium lamps in a warehouse or tissue culture plantlets
grown under LED lights in a laboratory. In these situations the light levels
are not going to change throughout the day.
“In most greenhouse environments light levels change
throughout the day. So to take one instantaneous measurement to indicate the light
level isn’t the best way to describe the total amount of PAR light available.
It’s better to look at the total amount, which is the DLI.”
Currey said a grower could estimate the DLI by using
hourly measurements.
“A grower could go out into the greenhouse every hour and
measure the light intensity,” he said. The grower would then use these
measurements in some calculations that would give the DLI. Realistically, very
few growers are going to determine DLI this way.”
There are a number of instruments available for measuring
DLI. Currey said one of the best ways to determine DLI is to use a quantum
sensor that measures PAR. The unit of measurement for DLI is moles per square
meter per day (mol/m2/day).
“In many cases the quantum sensor is connected to a data
logger that records the light measurements,” he said. “The quantum sensor can
be attached to a data logger that can record frequent instantaneous light
measurements which can then be integrated into a cumulative total for the day.
The quantum sensor can also be hooked up to a greenhouse environmental control
computer, such as an Argus or Priva, which can calculate the DLI.”
Expanding use of
DLI

Currey said the maps are based on historical averages.
“The DLI maps give you a good average,” he said.
“Poinsettia growers will tell you each growing season is different. Sometimes
they will have bright, sunny Novembers and other years, it’s dark and cloudy.
These maps provide a good indication of light levels, but there are going to be
variations between years. That’s why it is important for growers to measure DLI
so they know what is happening in their greenhouses and be able to react,
including using supplemental lighting to increase DLI.”
Currey said that research has been done to quantify the
DLI necessary for specific crops.
“The optimum DLI is going to vary for different crops,”
he said. “For African violets, a DLI of 6 mol/m2/day is enough to
produce a good crop. For poinsettias, 10-12 mol/m2/day are needed to
grow an acceptable quality crop. For cut roses, the DLI needs to be above 20
mol/m2/day to produce a good crop.”

Growers are using daily light integral with their environmental
controls and supplemental lighting to provide their plants
with optimum photosynthetically active radiation levels.

Currey said some growers are using DLI, their
environmental controls and supplemental lighting to provide their plants with optimum
PAR levels.

“It is kind of like predictive lighting,” he said.
“Growers have their lights turn on when the light intensity is below a certain
level and turn off when the light goes above a certain level. This way a grower
is not adding light during the brightest time of the day when the light level
is at or above the light saturation point for photosynthesis. Growers can use
lighting set points so that if they are not achieving the target DLI for a
crop, they can have the lights turn on sooner or turn off later to ensure
plants receive enough PAR. As a crop goes later into the spring, a grower is
likely going to lower that trigger light intensity because there is going to be
more natural sunlight so less supplement light is needed.”

David Kuack is a freelance technical writer in Fort
Worth, Texas; dkuack@gmail.