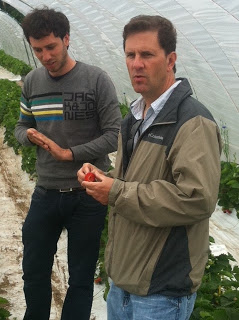 To meet the interest and needs of students and a changing
greenhouse industry, the horticulture department at the University of Arkansas is
shifting its focus to the controlled environment production of new and
underused food crops.
By David Kuack
An increasing number of students majoring in horticulture
at the University of Arkansas are focused on food crop production. Horticulture
professor Mike Evans said there has been a shift in interest by the students
from greenhouse-grown floriculture crops to greenhouse-grown food crops. Evans
said that except for turf management, students interested in food crop
production make up the majority of students majoring in horticulture at the
university.
“More and more students who are interested in greenhouse
production want to learn about growing food crops. To accommodate this
interest, we are starting a new class in which we are teaching about the
production of tomatoes, cucumbers, greens and other food crops. We are putting
in different kinds of production systems including hydroponics. The students
will have a really well outfitted lab where they can go in and they will be
raising various food crops with different systems. It will be hands-on.”
Evans said the growing interest in greenhouse food crops
has rejuvenated him and his program.

“There are a lot of people growing tomatoes, peppers and
cucumbers in greenhouses. So I started looking at greenhouse food production
and found the area of herbs and greens in many respects has been neglected.
There are people out there doing these crops, but if you look for referenced
research or talk to people, there is a lot less solid research on greens and
herbs.”
Evans has started working with fellow university
horticulture assistant professor and breeder Ainong Shi.
“We are interested in looking at new species of fresh greens
and the breeding of greens,” Evans said. “We are particularly interested in
developing crops that can take Southern hot climates. By converting our
facilities to focus on greenhouse food crops we are looking to become a central
institution to study new species of greens, developing new crops, breeding new
cultivars, and developing production protocols for these crops.”
Developing greenhouse
food crops

Evans said the agriculture industry in the United States
has been largely field-based, but there are signs that changes are occurring
when it comes to controlled environment food production.

“Much of Europe and many parts of Canada and Japan are
significantly ahead of the U.S. when it comes to the development of controlled
environment food production systems,” he said. “We are very much in a catch-up
mode.”
One of the crops that Evans will be looking at regarding
new species is fresh greens.
“Most of the greens research, including breeding, being
done in this country, by-and-large, is for field production,” he said. “Those
same varieties that were originally evaluated in the field are then taken and
grown in the greenhouse. We typically have not bred varieties for greenhouse
production.
“We want to find greens that have lower inputs, that
don’t need much water or fertilizer. They also shouldn’t have many pest
problems, have a rapid production cycle and can especially take heat.”
Evans said the issue with heat is a major obstacle for
greens grown in the southern United States.
“The problem that growers in the southern half of the
U.S. run into during the summer is what kind of greens can they produce? Greens
in the South are more of an early spring and late fall crop. The question is
can we develop greens that can be grown in the heat of summer?”
﻿

One of the crops that University of Arkansas researchers
are working on is to develop a heat-resistant spinach.

“We had a breeder here, Teddy Morelock, who did a lot of
spinach breeding,” Evans said. “He passed away, but left us with hundreds
of spinach lines. We’re trying to figure out what we’ve got. Teddy never conducted
greenhouse trials or evaluated the germplasm for production in greenhouses. All
of his evaluations were done in the field. We might be sitting on the best
spinach variety to grow in a greenhouse.”
Another crop that Evans is excited about studying is
dandelion (Taraxacum officinale).
“Dandelion has a higher nutritional value than spinach,”
he said. “It is loaded with iron, vitamins A and C and beta-carotene. It was
considered a medicinal plant. The early immigrants to America brought
dandelions with them for food. A lot of people suffered vitamin deficiencies
and developed scurvy. So they brought the dandelions with them.”
Evans said dandelions can be grown quickly, don’t need a
lot of inputs and are very heat tolerant.
“They are short day plants so they might need some night
interruption lighting,” he said. “That’s not real a concern because the plants
would probably be harvested before they flower.
“There is a great deal of genetic diversity in dandelions
because they are spread worldwide and are segregated. There are a lot of flavors and
traits. We are going to be collecting germplasm from all over the world. We are
going to be breeding dandelions so that they develop into what we want them to
be.”
Setting up a strawberry
cam

As part of the National Strawberry Sustainability Initiative, Evans will be working with professor
Elena Garcia, who is the university’s fruit specialist. The research they will
be doing is part of a program funded by the Walmart Foundation, which is being
administered by the university’s Center for Agricultural and Rural
Sustainability.

“We want to demonstrate and teach growers about various
types of hydroponic systems for strawberry production,” Evans said. “Those
systems might include NFT troughs, gutters, Dutch buckets, etc. There are
various types of hydroponic systems that we feel bring some significant
advantages to the production of strawberries and help to promote a number of
sustainability goals in the program’s guidelines.”
Evans said the type of structures used to grow the
strawberries will also be discussed.
“If a grower considers using high tunnels, he can extend
the season,” Evans said. “Or a grower might consider using drop wall
greenhouses. There is the possibility of providing heat, which could result in
year-round production. There are a lot of possible benefits for our growers.”
Evans and Garcia have been traveling around the state and
meeting with growers talking to them about the different production systems and
explaining how they can be used for strawberry production. Evans said many of
the growers that he and Garcia have met with didn’t know about the differences
in the production systems and didn’t understand the differences.

Evans has renovated two of the university greenhouses in which various strawberry production
systems will be installed and used to produce crops. About 4,000 square feet
has been converted to hydroponic food production with about 1,600 square feet
devoted to strawberries and the remaining used for greens.

“Our
goal is to put in several different systems and to shoot video of what we are
doing from the beginning to end,” he said. “We will shoot video of the assembly
of the different systems as well as the production of the strawberries in each
system. We will film and document in detail everything we do. The videos will
walk the growers through all aspects of design, build, manage, maintain and
grow the strawberries using a specific system.”
Evans said the videos will be used as an educational tool
allowing growers to look at the different production systems and to see the
advantages and disadvantages of each system.
Evans has also been working with University of Arizona
horticulture professor Chieri Kubota and research specialist Mark Kroggel to
prepare videos on the strawberry production research they have been conducting
at the university’s Controlled Environment Agriculture Center.

“Not every system is perfect for everyone,” Evans said.
“Everyone has to look at what they are growing or planning to grow and what is
their market. We want to use the videos as a way to demonstrate these systems
to teach growers how to effectively select one and how to effectively use it.”

For more: Mike
Evans, University of Arkansas, Department of Horticulture; (479) 575-3179; mrevans@uark.edu.
David Kuack is a freelance technical writer in Fort
Worth, Texas; dkuack@gmail.com.