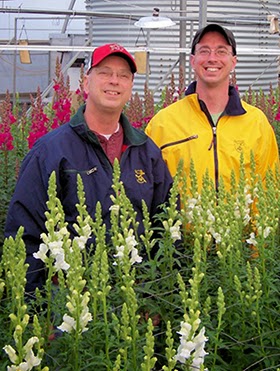 Fresh cut flower grower Flowers By Bauers & Greenhouses has installed
a vertical production system to increase the production of ornamental and
edible crops.

By David Kuack
Flowers By Bauers & Greenhouses in Jarrettsville, Md., has been
growing fresh cut snapdragons since 1996. The company produces the snaps
year-round in perlite using a recycled nutrient solution. The flowers are sold
through the company’s own retail outlet and to retail florists in the surrounding
Baltimore, Washington, D.C., and Wilmington, Del., areas.
Matt Bauer, who is a partner in the company, said the
snaps go from a 20-week crop during the winter to a 10-week crop during the
summer.
“With the quicker crop time during the summer, half the
greenhouse goes out of production so we add sunflowers during that time,” Bauer
said. “The sunflowers are sold to the same customer base as the snaps. As the
days start to get shorter in the fall, the sunflowers come out and are replaced
with snaps for winter production.
Expanding
production space

Bauer said selling directly to retail florists has
allowed the company to achieve a higher price point, but has limited its
revenue.

“We are limited on how much we can raise the price on the
snaps,” Bauer said. “We wanted to get more money out of the production space we
currently have, so that is why we decided to go to a vertical production
system.”

Bauer said additional production space could be built on
to the existing structure, but it would not make a major impact on the
company’s income.

“Where we are operating the greenhouse now we are limited
as to how much we could expand,” he said. “Another reason we chose to go
vertical was the little investment we had to make compared to the income we
could generate from that space. We are only adding troughs and the
infrastructure to install them. Everything else we needed to grow the
additional crops is already there.”
Since the greenhouse has a gutter height of 12 feet,
Bauer has been able to install a three-tier vertical system.
“We have five bays with 6-foot wide by 100-foot long
rolling benches that have support hoops,” he said. “There are hoops that go
over the benches every 10 feet. We ran a metal suspension tube on each side of
the benches. We installed troughs on top of the suspension bars. I can also
suspend cables from the greenhouse trusses so that another layer of troughs can
be added.
Bauer said when he first proposed the three-tier vertical
production system to the University of Maryland researchers he is working with,
they were concerned with the impact the additional overhead crops would have on
the snapdragons.
“Adding the other crops above the snaps lowers the light
levels, but only adds about a week to the snaps’ production schedule,” he said.
“We aren’t using any supplemental lights. The double layer poly the greenhouse
is covered with provides diffused light. The quality of the snaps hasn’t
suffered with the additional crops. And the income we are generating with the
added production offsets the additional crop time.”
Lettuce added to product
mix

The crops that Bauer has grown in the vertical production
system include a summer crop of celosia, Dianthus
barbatus (Sweet William) and European gourmet bibb lettuce. This summer he
is trialing a crop of Matthiola incana
(stock).

“We grow everything in perlite, which is not reused,”
Bauer said. “We compost the perlite and plant debris that is left over. We used
to grow in perlite grow bags that we reused for five to seven years. We found
that as the bags are reused there are more roots which can change the whole
dynamics of how the plants need to be watered and can impact the quality of the
snapdragons. Another reason for using perlite with the lettuce is it keeps the
roots cooler during the summer and can help prevent bolting. The temperature
can reach 100ºF
during the summer and we have not had any issues with bolting. We also use high
pressure mist to help lower the temperature.”
Bauer said he trialed the bibb lettuce for two years
before he started growing it as a regular crop. Initially he fertilized the
lettuce with the same nutrient solution that he was using for the snapdragons.

Bauer said well water is used for all the crops. It is
run through a series of sand filters before being applied with a closed-loop
irrigation system.
“Our well water is almost like distilled water,” he said.
“We don’t do any type of water treatment for disease control. We have a small
storage tank for the nutrient solution so we are constantly drawing it down and
filling it back up. The water doesn’t sit very long, it is always moving. We
constantly monitor the electrical conductivity and pH.”
Bauer said that he is planning to grow the lettuce
year-round.
“We expect that we will be able to grow five to six crops
of lettuce per year,” he said. “We run the temperatures cooler at night, around
50ºF, because the
snapdragons do better under those conditions. If we raised the night
temperature to 65ºF
we could probably produce nine to 10 crops of lettuce a year. We want to keep
the temperatures cooler for the flowers.”
Bauer said he has overhead production space to grow 600
heads of lettuce per week. He said one of the biggest adjustments was how much
faster the lettuce grows compared to the cut flowers he is growing.
“A lettuce crop during the summer is harvested in six
weeks,” he said. “During the winter and growing under cooler temperatures, the
lettuce finishes in eight to nine weeks.”
Creating a local market

One of the advantages that Bauer had with trying to sell
the lettuce was having an established customer base. The lettuce is marketed in
plastic clam shells with a label that reads: “Flowers By Bauers, Eat Healthy,
Feel Better.”

“I contacted the University of Maryland extension service
prior to growing the lettuce to see what kind of regulations and requirements
were in place for edible crops,” he said. “If we sold the lettuce from our
flower shop and from our delivery trucks within the state, there weren’t any
major issues. If we were to sell the lettuce to supermarkets like Wegmans or
Giant, we would have to become GAP certified.”
Bauer visited with his customers telling them about the
lettuce and how it was produced. He said he offered them samples and once they
tried it that was enough to convince them to start buying it.
Bauer said some of the most enthusiastic customers for
the lettuce are women between the ages of 25 and 35 who have children.
“When I first started marketing the lettuce, I would also
take some of the flowers in five-stem bunches,” he said. “I visited hair salons
and other businesses in Jarrettsville that are women-driven. Whatever I sell in
lettuce, I always double the sale with flowers. The mothers would buy the
lettuce for their families because it was healthy. But they would buy the
flowers for themselves because they made them happy. With the lettuce, they
will only buy so much. But with the flowers, there doesn’t seem to be a limit.”

Bauer visits local businesses every Thursday with lettuce
and bunches of flowers.

“Initially everyone in the community thought the lettuce
was for decorative purposes because we hadn’t sold an edible crop before,” he
said. “They didn’t know they could eat it. I determined that I had to get out
and let people know this was edible lettuce.
“Another thing is listening to what your customers are
saying. The retail florists that I sell to ask what else do we grow. I listen
to them to find out what they’d like to be able to buy from me. I’ll try
growing it to see if I can produce it and whether it is feasible on a
commercial scale.”