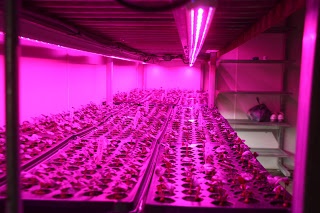 Filip Edstrom at Green Masters Inc. is seeking to quantify the advantages of switching from fluorescent to Horticultural LED Grow Lights in his company’s growth chamber.

Filip Edstrom has seen the writing on the wall and it says “LEDs”. Edstrom, vice president at Green Masters Inc. in Apopka, Fla., said LED lights are where flat screen TVs and laptop computers were five to six years ago.
“If you look at what the cost of flat screens TVs and laptop computers are now compared to a few years ago. It’s just a matter of time for the volume of LEDs to go up and the cost to come down,” Edstrom said. “LEDs are the next wave in lights. This is something that has been going on in Europe and we are just starting to trial the lights.”

Why LEDs?
Green Masters, which is a flowering pot plant producer, operates a 1,000-square- foot growth chamber equipped with 480 4-foot fluorescent light fixtures. The chamber is air conditioned so that it can be used for seed germination and growing on some crops including cyclamen.
Edstrom considered LEDs because he was looking for lamps that were more energy efficient and generated less heat than the fluorescent lamps.
“The cyclamen plugs can’t be grown outside during the summer. We have to grow them inside where it is cool,” Edstrom said.  “With nearly 500 fluorescent fixtures there is a considerable amount of heat generated,” he said. “Because it is an air conditioned room, the heat factor plays a big factor in how much air conditioning is needed and how much electricity is used. Energy savings is the primary reason for looking at the LEDs.”

No wasted energy
Working with Hort Americas, Edstrom has set up a trial to compare electricity usage and plant growth under the LEDs and fluorescent lamps.
“We are using the Philips GreenPower LED production module,” he said. The modules provide the dark red and blue wavelengths that the plants use so that we are not wasting energy on light the plants don’t use,” he said. “What we have been told is that by using these certain wavelengths the plants will actually be more compact so that there will be less need for growth regulators. Also by only putting on the light that the plants need we are being better stewards of the environment because we are not wasting energy.”
Edstrom is currently running a trial using one of the benches in the growth chamber that is equipped with the LED modules.
“The fluorescents were state of the art when we installed them in June 2000. There is really nothing in regards to fluorescent fixtures that is more efficient.”
Edstrom said replacing the 4-foot fluorescent lamp fixtures with the 120-centimeter LED modules has been very simple.
“We take out the 4-foot fluorescent fixture and mount the LED module and we’re good to go,” he said. “We didn’t have to make any changes to the height of the shelving. Take the fluorescent fixture out and put the LED module in. It’s that simple.”

Quantifying the benefits
Edstrom said the feedback on the performance of the LEDs from the grower who oversees the growth chamber has been positive.
“The grower has said the crops under the LEDs are growing just as well, probably a little bit better,” Edstrom said. “The plants that are under the LEDs seem to be a little more compact. The plants once they are out of the growth chamber and transplanted, they are performing just as well or a little bit better. The question is the payback there?”
Edstrom said that during the summer there is not a lot of production occurring in the 8 acres of greenhouses and shade houses. The company produces about 45 different crops, including annuals, perennials and herbs.
“We are trying to determine is there a crop or certain crops that benefit being under the LEDs,” he said. “We are also trying to determine is there a difference between each of the colors or varieties.”
Edstrom said initial light measurements have shown that the LEDs are delivering 5-10 percent more light vs. the fluorescents.
“Also, if we can shave off a week’s crop time in the chamber that is worth something,” he said. “Or if we can produce more compact plants without having to apply a PGR, that’s worth a lot.
“I can determine how much electricity I’m using and how much electricity I’m saving with that fixture. The variable that we don’t know yet and why we are doing this trial is if we can improve plant quality and reduce the crop time in the growth chamber. If we find that certain crops do better under the LEDs, those plants will go under the LEDS. For the others where there isn’t a big difference, those we’ll keep under fluorescent lamps.”
Edstrom said the initial cost of the LED lamps has come down and as the price continues to drop it will make financial sense to replace the old fluorescent fixtures.
“If we were building a brand new growth room today and we had to buy the bulbs and fixtures, we would choose the LEDs even though there is higher investment cost,” he said. “The payback would be much quicker.”