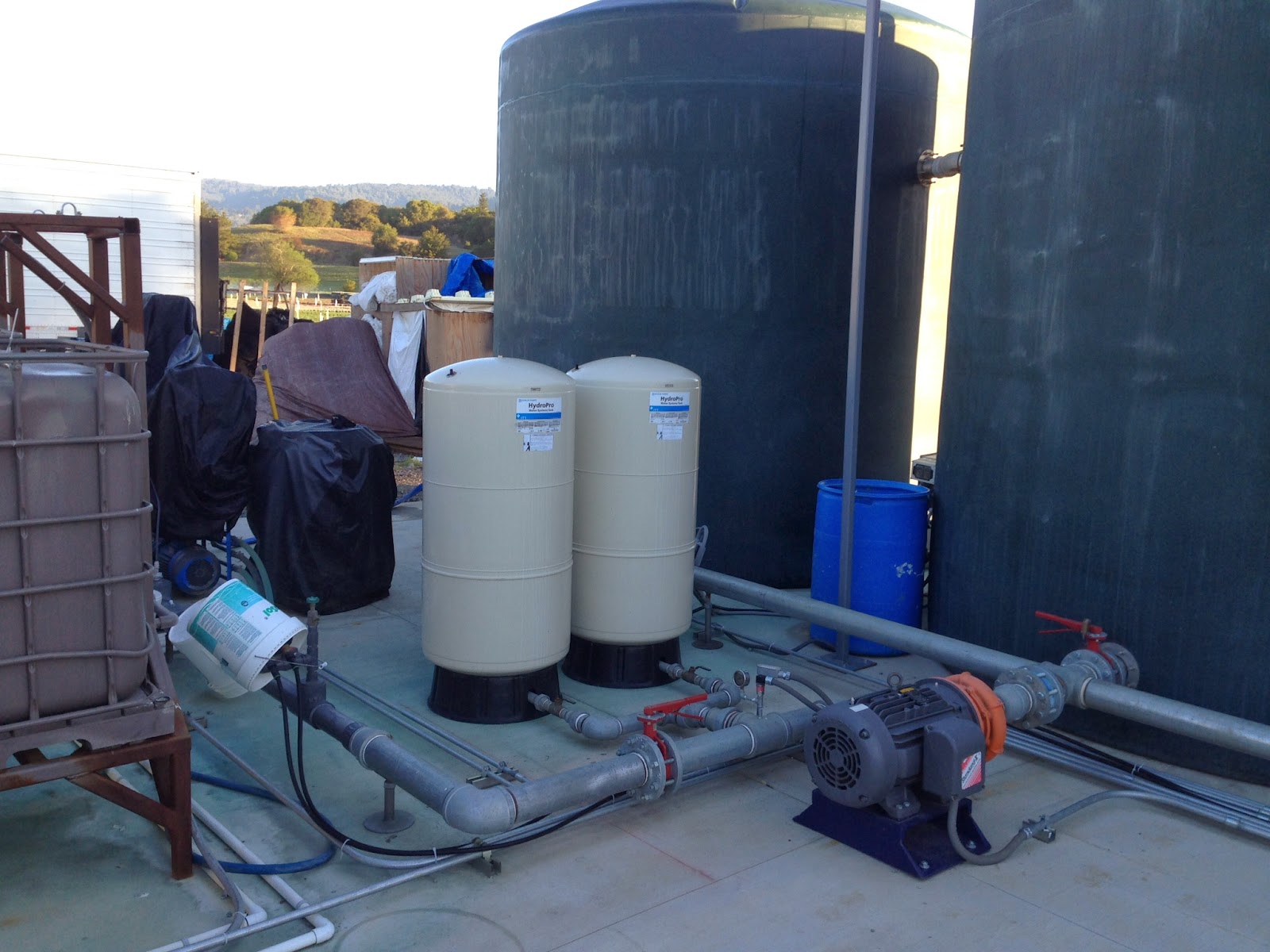 As more growers look to install closed loop irrigation
systems, there is a need for treatment systems specifically tailored to handle
horticulture issues related to biofilm and disease control.

By David Kuack
The intense drought in California and continuing drought
in Texas along with their impact on the rising cost of food are making
government officials and the public painfully aware of the importance of having
and maintaining a reliable water supply. USA Today reports that California
produces nearly one-fifth of the United States’ entire agricultural output.
Should the state’s water woes continue the newspaper said farmers and
distributors may soon have to start looking for alternative locations to grow
or buy their crops.
The outlook released by the National Drought Mitigation
Center (http://drought.unl.edu) indicates that drought will also likely develop
in portions of Arizona, Texas, and California where there currently is no drought.
The center indicated California remains on track for another year of historic
drought that has resulted in curbed water supplies and a request from Governor Jerry
Brown for a 20 percent reduction in water use. In addition to reducing the
state’s agricultural production, the center said the drought is expected to drive
up unemployment locally and food prices nationally.
Focus on water
conservation

University of Connecticut assistant professor and
greenhouse specialist Rosa Raudales said ornamental growers along the West
Coast are well aware that water issues are only going to intensify and are
taking action.

“Water quality and availability are going to continue to
become bigger issues,” Raudales said. “There are some regulations at the state
level, like on the West Coast, and others more localized at the county level in
other states. However, it is expected that tougher regulations on water
management will arise and affect agriculture. Many ornamental growers are
trying to stay ahead of the regulations and are installing closed irrigation
systems.”
EPA released the report “The Importance of Water to the U.S. Economy” in November 2013.
“In this report, EPA discusses the value of water and the
interconnectivity of water bodies,” Raudales said. “What this report indicates
is that the true dollar value of water has long been underestimated.

“In addition, the report discusses the importance of how
all water sources are connected as a means to protect drinking water sources.
The implication for growers could be that the cost of purchasing water could
increase. Also, because water sources are interconnected, there could be less freedom
for how growers manage their water sources and the runoff on their property.
Long term, U.S. greenhouse operations could be forced to install closed loop
irrigation systems, like the growers in some European countries.”

Raudales said as more growers look to recycle their water
the quality of that water is going to become a bigger issue. She said growers who have installed closed loop systems
are filtering the water and then treating it with chlorination or some other
chemical.

Raudales recently surveyed 43 young plant growers
nationally and inquired as to the type of water treatment system they were
using. She found among these growers s that the systems most commonly used were
copper ionization, activated peroxygens and chlorine.

“Based on my discussion with growers, plant disease is an
issue when producing a very susceptible crop,” she said. “Although disease is
not frequently observed, there is a still a risk of losing plants. Growers
manage the disease risk caused by waterborne pathogens by using a combination
of continuous low dose sanitizers in the irrigation system and good watering
practices to avoid overwatering.”
Raudales said the most common water-borne pathogen found
in greenhouses is usually Pythium. She said in nurseries, Phytophthora is the
most common water-borne pathogen.
“Pythium and Phytophthora have swimming life stages
called zoospores that allow them to move freely in water,” she said. “In
contrast, the disease pathogens Fusarium, Thielaviopsis and Rhizoctonia move in
water along with debris such as peat, leaves and dead roots. Growers should use
filtration systems to remove debris to reduce the risk of these pathogens.”
Battling biofilm

Raudales said biofilm is a common problem in the
horticulture industry regardless of the crop or type of operation.

“Biofilm, commonly referred to as “slime,” is a matrix of
multiple microorganisms with extracellular polymeric substances that build up
in layers in water pipes and emitters,” she said. “It is a very complex
structure built mainly by bacteria, but it can also harbor other types of
microorganisms.”
Raudales said biofilm will build up even in clear water
with no soluble fertilizers or turbidity.
“Microbes that begin to form biofilm are relatively
stagnant until their population has increased to a certain level,” she said.
“Once that level is reached, there is a “team effort” and the microbes release
extracellular polymeric substances that makes the biofilm look slimy. Every
time water flows through a pipe, even if it is clean, more microbes are added
to the biofilm.”
Raudales said there are different types of biofilms
depending on the organisms and the metals in the water. A common one is created
by iron bacteria that results in an orange-colored biofilm. There are also dark
green and light-colored biofilms. She said there is a lot of diversity with
biofilms, which makes treatment more complicated.
Raudales said biofilm is very costly for growers to
manage because it involves labor to monitor, replace and clean clogged pipes
and emitters.

2-inch PVC water pipe showing:
Top: new pipe.
Middle: clear water line showing biofilm formation.
Bottom: constant liquid feed line showing algae and biofilm.
Photo courtesy of Konjoian’s Floriculture Education Services
“One of the main issues with biofilm is uneven water
delivery to the plants because of clogged irrigation emitters,” she said. “Growers
may be unaware of this uneven watering until they start to see wilted plants.
Managing biofilm may involve manually cleaning and replacing emitters.”
Raudales said there are chemicals, including chlorine
dioxide and activated peroxygens, that can reduce the number of microorganisms
in the water to prevent or reduce biofilm buildup.
“The issue that growers face is high concentrations of
sanitizers can also be phytotoxic to plants,” she said. “Growers should
consider multiple levels of control. Chemicals are one part, but growers should
also try to remove as much debris from the water as possible through
filtration.
“Using chlorine is an expensive technology, but it is
also one of the technologies for which most of the research has been conducted.
Some growers avoid using chlorine because of the risk of phytotoxicity,
especially in the overhead irrigation of young plants.”
Raudales said growers who are considering chlorinating
their water, should also think about dechlorinating their water to reduce the
risk of phytotoxicity. She said most growers are not dechlorinating their
water.
“If growers are putting a chemical in their water, they
should also be thinking about removing the chemical right before they reuse the
water on their plants,” she said. “The chemicals that can be used to kill the
biofilm microorganisms may also be phytotoxic to the plants. More research is
needed in this field.”
Raudales said an alternative treatment would be to shock
the irrigation system with a higher chemical concentration. This treatment has
to be done when the plants aren’t present. She said a higher dose can remove
the biofilm from the irrigation system, including the emitters.
Biofilm is not unique to horticulture and Raudales said
growers can learn about its treatment from other industries.
“There is a lot that we can learn from factories,” she said.
“These facilities have very long piping systems and they treat to control
biofilm a lot. The difference is these other industries are able to use
stronger chemicals.”
Raudales said when water-soluble fertilizer is injected
into an irrigation system, algae will grow.
“As long as there are nutrients in the water, you will
see algae,” she said. “What controls biofilm does not necessarily kill algae.
They are very different organisms. While biofilm builds up in layers, algae are
a simple, single layer. Water to which water-soluble fertilizers are injected adds
a complexity to the water chemistry as well.”
Traditionally algae have been controlled with
copper-based products. Raudales said it is unknown if copper-based products are
effective for controlling biofilm.
Designing a better
treatment system

Raudales said there is a business opportunity for
companies to specialize in the design of water treatment systems specifically
for greenhouse operations.

“Many water treatment companies are providing a product
or technology,” she said. “Only a few of them are talking about the design.”
Raudales plans to continue working with University of
Florida professor Paul Fisher, who was her doctoral advisor, on water treatment
design.
“In many cases, water treatment systems have to adapt to pre-installed
irrigation systems and available greenhouse space,” she said. “The grower who
is starting from scratch with a new facility has the advantage of creating a
comprehensive design with multiple barriers to reduce risks of contamination
and phytotoxicity.