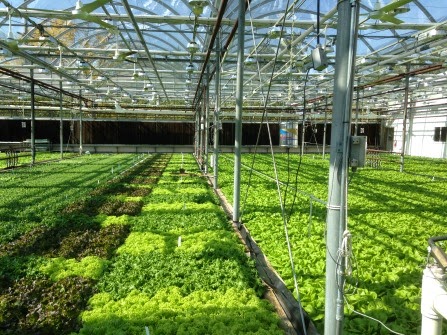 Greenhouse lettuce can be a successful container or
hydroponic crop for ornamental plant growers looking to give edibles a try.

Mattson said. “Grown as a
container crop, lettuce is relatively similar to petunia. However, lettuce has somewhat
greater calcium needs. Growers can produce a relatively good crop of lettuce in
containers, if they use a complete fertilizer at a moderate strength of 150
parts per million nitrogen.”

Mattson said head lettuce can be produced in containers similar
to a bedding plant crop. The seed would be planted into a plug tray for three
to four weeks. Transplanting the plugs into larger containers, the crop could
be finished in four to six weeks depending on light and temperature levels.
He said baby leaf lettuce can be grown in flats. The seed
is directly sown into the growing medium and grown for three to four weeks
until plants reach suitable size.
Calcium deficiency
tipburn

Leaf tipburn is a physiological disorder that can occur
when growing greenhouse lettuce. It can greatly impact the salability of a
crop.

“The main reason that tipburn occurs is the lettuce is
growing too fast under high light,” Mattson said. “For lettuce, the target
daily light integral is 17 moles per square meter per day. The light level should
be lower if there is poor air flow. If the light level goes higher than 17
moles, the rapid growth of young leaves is affected. There may be an inadequate
calcium supply, especially as the lettuce heads begin to mature and close. If
there is not enough air flow and not enough transpiration by the young leaves,
then not enough calcium can reach the leaves through the xylem sap. This can
cause tipburn to occur. It’s a case of pushing the plants too fast.”
Mattson said in many cases, tipburn is not a result of a
lack of calcium supplied to the plants, but an inability of the plants to
transport enough calcium to the young leaves.
“For container-grown lettuce, there is typically enough
calcium if the growing medium has a lime charge and if the fertilizer water
solution contains more than 50 ppm calcium,” he said. “Many common bedding
plant fertilizers, including 20-20-20, 20-20-20 and 21-5-20, do not contain
calcium. These fertilizers are typically used with tap water sources that
contain moderate alkalinity. In many cases, these tap water sources also
contain sufficient calcium.”
Mattson said it is important for growers to test their
water sources to make sure adequate calcium is being supplied, either from the
water source or added into the fertility program. If calcium needs to be added,
calcium nitrate is most commonly used. However, calcium nitrate is not
compatible with most complete fertilizers.
“Usually if a grower has to add calcium, it can be done
using a separate stock tank or a separate injector,” Mattson said. “One
strategy is to use a separate injector for the calcium nitrate in a series with
a 20-10-20 fertilizer that is being added with a second injector. Adding 50 ppm
calcium from calcium nitrate should be sufficient.
“An alternative method of calcium application, if a
grower has only one injector is to rotate between two separate stock tanks, one
for calcium nitrate and one for the bedding plant fertilizer. A grower would then
rotate between the two fertilizers. For example, for two days he would use the
20-10-20 fertilizer and on the third day he would use the calcium nitrate
applied at 150 ppm.”
Production with
organic fertilizers

Mattson has been able to grow a relatively good crop of
container-grown lettuce using granular organic fertilizers incorporated into
the growing medium.

“We incorporated poultry-based organic fertilizer (Sustane
8-4-4) into the growing medium at a rate of 8 pounds per cubic yard for both
the seed germination and transplant growing mixes,” he said. “That provided
good fertility, but for optimum yields I would also suggest making some liquid
organic fertilizer applications, maybe two to three times a week as the plants
get older.”
Mattson said the organic granular fertilizer he used is
temperature-dependent and is broken down by soil microbes. Sustane 8-4-4 has a
45-day release period, but under very warm greenhouse temperatures Mattson has
noticed quicker release rates. He said there are other slow release organic
fertilizers with different release periods. For example, Verdanta EcoVita lists
a 75-100 day release period.
Monitoring
electrical conductivity and pH

One strategy that Mattson recommends growers do periodically
is to monitor the electrical conductivity (EC) and pH levels.

“Monitoring EC will help growers determine if the plants
are receiving sufficient fertility,” he said. “If a grower is incorporating a
slow release fertilizer, this is a good indicator of when additional fertilizer
needs to be added. An under-fertilized plant will show yellow lower leaves from
nitrogen deficiency.”
Mattson said monitoring pH is important as it impacts
nutrient availability. He said lettuce isn’t commonly susceptible to iron
deficiency, but it will start to show up when the pH starts to increase above
6.5-7.
“Monitoring EC and pH is especially important in
hydroponics,” he said. “A good grower who is producing his crop in a growing
medium in containers will monitor the pH every week or two. The pH may change
over the course of a week by maybe one unit.
“Growing hydroponically, a grower should be monitoring
the pH every day and make adjustments. Depending on the type of fertilizer and
the quality of the water, the pH in a hydroponic set up could change two units
in a day.”
Optimizing lettuce
production

Mattson said light and temperature are going to be the
drivers for how long it takes to finish a lettuce crop. Whether a grower is
producing the crop in containers with growing medium or hydroponically
shouldn’t have any effect on the length of production.

He said plant spacing can also impact the size of the
lettuce head. If plants are grown in small containers and spaced pot-to-pot,
the lettuce heads may not reach full size.
For greenhouse lettuce, Cornell University researchers
developed a hydroponic production model that enables growers to produce a
lettuce crop from seeding to harvest in 35 days if temperature and light
intensity are at optimum levels.
“When the light level isn’t optimized, a lettuce crop can
take more than 100 days from seeding to harvest,” Mattson said. “High pressure
sodium lamps would be the best lamps to use if a grower is looking to provide
supplemental light in a greenhouse to increase the daily light integral. For
the Cornell model we adjust the amount of light in the greenhouse based on the
amount of outdoor light. Seventeen moles per square meter per day is the daily
light integral we are aiming for with the model. The optimum temperature for
plant development is about 75ºF
during the day and 65ºF
at night.”