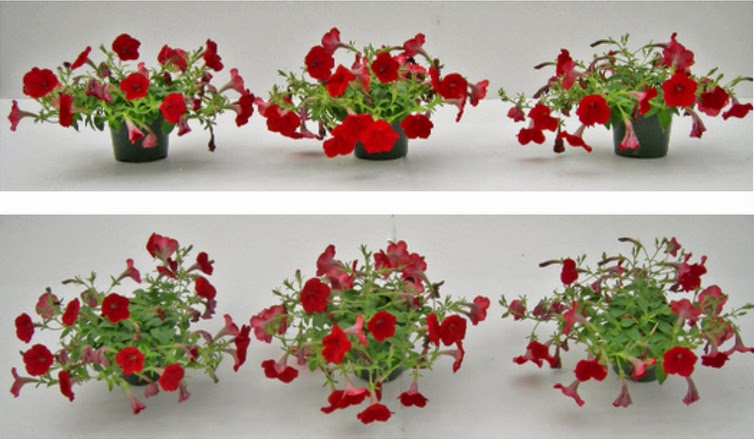 By David Kuack
Growers of both food and ornamental crops are facing
increased scrutiny regarding their production practices from the pesticides
they apply to the amount of water and energy they use. In October, Whole Foods
Market launched its Responsibly Grown
program. The company
said the purpose of this new rating system is to assess production practices
that impact human health and the environment. The system labels fresh fruits,
vegetables and flowers as “good,” “better” or “best.” The program also prohibits
the use of some of the hazardous neurotoxins still permitted in agriculture.
If growers implement more sustainable practices to
produce their crops, are consumers willing to pay more for them? A recent University of Florida study
focused on consumers’ willingness to spend more on ornamental plants based on
plant attributes related to sustainable production methods, container types and
origin of production. Consumers were willing to pay up to 16 cents more for
plants grown using energy-saving and sustainable production methods, plants
grown in non-conventional containers and plants grown locally.
Organic fertilizers
show potential

Claudio Pasian, horticulture associate professor at Ohio
State University in Columbus, said an increasing amount of pressure is being
put on growers related to the environment by both retailers and consumers.

“Growers may be forced by their clients to produce more
sustainable products, including more organic products,” Pasian said. “Here in
Ohio, like in other parts of the country, there are concerns with fertilizers
running off into waterways and leaching into ground water. In the future
“fertilizer” may become a taboo word for some people. For some people, perception is
reality. Using an organic fertilizer may help growers achieve a more
sustainable image with retailers and consumers.”

“I’m not sure why the pansies did not do as well as the
other species,” he said. “There were some phytotoxicity issues. The quality of
the plants was not as good and there was high rate of mortality.”
Expanding
fertilizer trials

After the initial trials with organic fertilizers showed
positive results, Pasian expanded his research with additional ornamental
plants. He compared incorporating Scotts Miracle Gro Organic Choice and Sustane
organic fertilizers to a controlled-release and water-soluble fertilizers. All
of the plants in the study were grown in 4½-inch pots containing Fafard 3B
bark-based growing mix without a fertilizer charge.

“The plants grown with the organic fertilizers were
slightly smaller. But overall the organically fertilized plants did well. In
some cases, the plants being smaller could be a positive effect because that
means growers may not have to apply growth regulators.”

Pasian has received a grant from the Horticultural
Research Institute to expand his organic fertilizer study to include herbs and
perennials. He worked with a local grower on the plant selection and chose
three herbs (basil, parsley and thyme) and three perennials (Nepeta cataria, rudbeckia and salvia). Like
the annuals study, the herbs and perennials were grown in 4½-inch pots
containing Fafard 3B bark-based growing mix without a fertilizer charge.

“In the case of basil, the initial application of organic
fertilizer was enough to finish the crop,” Pasian said. “One single application
incorporated into the growing mix before planting the plugs would be sufficient
for the production cycle. For thyme it would be very close to finish with one
application, almost the same as basil.”
Pasian is planning to repeat the trials with parsley
because he encountered some issues with heat stress and disease problems.
“During the parsley trial even the control plants had
problems,” he said. “The plants were grown during the summer so the warm
temperatures in the greenhouse may have contributed to the problems. I expect
when the parsley study is repeated during the winter and the temperatures have
cooled down the results will be different.”

Pasian said since many perennials are long-term crops,
they will need additional applications of organic fertilizers.

“In the perennial trials, the first flush of growth with
the organic fertilizers was good,” he said. “But then the fertilizers ran out.
Applying a powder or a small granular organic fertilizer to each pot is not
realistic for growers. These organic fertilizers can be incorporated into the
growing mix prior to planting. Once these fertilizers are used by the plants, which
takes about five to six weeks, a grower can start applying a liquid organic
fertilizer. This could be a fish emulsion or similar type fertilizer.
“One single organic fertilizer application incorporated
into the growing mix is not enough. Additional fertilizer will need to be
applied probably more than once. The plants grew decently with one application,
but if larger plants are the goal then more fertilizer is going to be needed.”
Nepeta cataria
(catnip) grew very fast initially and was the first perennial to show
deficiency symptoms. Pasian said nepeta would require additional fertilizer
applications sooner.
Rudbeckia took much longer to show any deficiencies.
Pasian said since rudbeckia is a very slow crop with a longer production time,
it will need supplemental fertilizer applications.
“Organically fertilized rudbeckia produced a first flush
of growth that was as good as plants fed with water soluble and controlled-release
fertilizers,” he said. “But as time went on during production, the organically fertilized
plants needed another shot of fertilizer.
“I consider salvia to be an intermediate crop between
catnip and rudbeckia. I expect that salvia will require additional fertilizer
applications.”
Pasian will continue the trial with the same herbs and
perennials this winter and coming spring. The plants will be grown in 1-gallon
containers to match commercial production practices.
“This research is not being conducted with the goal of
changing how fertilization is done by most growers,” Pasian said. “Water soluble
fertilizers are excellent products that growers use successfully. This research
will provide growers with information on how to produce a crop that has been
fertilized in a more sustainable way to satisfy a small percent of their clients.
“Marketing is going to be the issue for growers. If they
grow plants with both organic and water soluble fertilizers, those grown with
the organic fertilizer are going to have to be marketed differently so the
consumers know the difference and can make their choice about which plants to
purchase.”