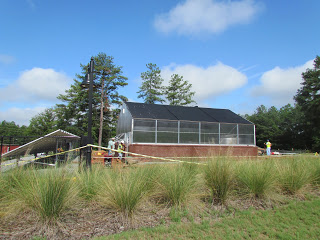 Students and faculty at Southern Polytechnic State University in Marietta, Ga., will be studying and doing research in a new solar powered greenhouse.
by David Kuack
When Marietta Power & Water contacted Southern Polytechnic State University about a grant program that could benefit the school, administration officials were eager to listen. The grant program, which was being administered by the power company and Electric Cities of Georgia, would enable the university to install 24 solar panels while paying only 1/3 of the total cost.
Electric Cities of Georgia received the grant as part of the 2009 American Recovery and Investment Act. Marietta Power & Water used a portion of the grant money ($54,000) for the solar panels. The grant allowed for the installation of solar panels that will generate 15 kilowatts of electricity. The electricity generated by the panels is enough to power 225 light bulbs.
“The grant was for 15 kilowatts of solar panels so we divided the installation,” said Steve Kitchen, senior director of facilities management at the university.
Sixteen of the panels were installed on the roof of the Engineering Technology Center and generate 10 kilowatts of electricity. The remaining 5 kilowatts of electricity will be generated by eight solar panels that have been installed next to a new 25- by 35-foot greenhouse constructed adjacent to the ETC. Each of the panels measures about 4 feet wide by 7½ to 8 feet long. Both installations were covered by the grant.
The 5 kilowatts of electricity generated by the panels will be used to support the greenhouse during daylight hours. The electricity will be used to power lights and a heater. The greenhouse will be used primarily for academic and research purposes.

Upgrading the installation
Although the greenhouse is nearly complete, Kitchen said there may be some opportunities available for upgrading the system.
“If it made economic sense, there could be an expansion of the panels on the roof of the ETC building,” he said. “The other change that could occur is finding a means to store the electricity generated by the solar panels so that it could be used at night. The 5 kilowatts of electricity generated by the panels is more than enough to operate the greenhouse during the day. If there was a storage system to store the electricity generated, we could use it to power the greenhouse during the night as well.”
Easily maintained
The university will maintain the panels, which Kitchen said is relatively simple.
“The most frequent activity to maintain the panels is to make sure they are kept clean to operate at maximum efficiency,” he said. “It doesn’t take much more than rinsing them off with water to keep the dust off of them. They are so new right now we’re not sure how often they will have to be cleaned.”

Interest in alternative energy
Kitchen said the university has had limited exposure to working with solar power. Solar panels had been installed on the old engineering building.
“There is a small array of panels on that building, referred to as Building G,” he said. “The students with the support of the faculty have built an electric bicycle recharging station. I personally haven’t seen any electrical bicycles on campus, but we have a recharging station for them.”
Kitchen said that the university does have an alternative energy program and he expects that the faculty involved with that program will be interested in learning more about the solar panels. He said they are always interested in looking at alternative energy sources and would likely be supportive of an expansion of solar panel installation.
Kitchen said any consideration for use of alternative energy sources would probably not occur unless it was associated with a major renovation of one of the university’s buildings.
“There is no other building on campus that is currently using alternative energy sources.” Kitchen said. “Part of it is the faculty and the research they are doing and what they are teaching the students. The other part is the practicality and the cost associated with using alternative energy sources.
“Cost is a major factor. There is always a cost associated with bringing technology to campus. We are looking for projects, like what we did with Marietta Power, that we can team up with and offset the costs.
For more: Steve Kitchen, Southern Polytechnic State University, (678) 915-3939; skitchen@spsu.edu; http://www.spsu.edu.