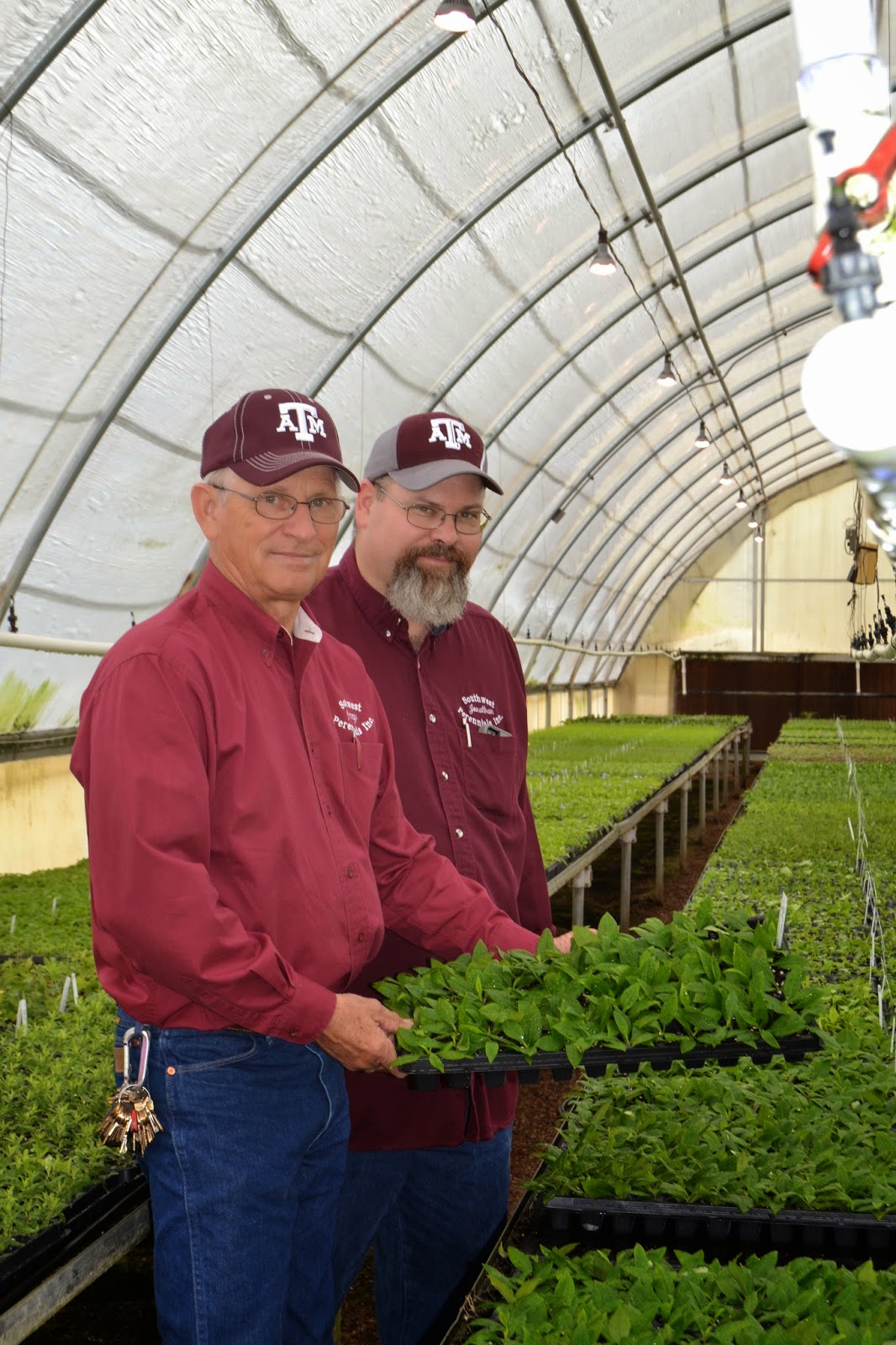 Young plant grower Southwest Perennials has been able to
reduce the number of stock plants, increase the number of viable rooted
cuttings and shorten rooting times with LEDs.

By David Kuack
Jerry and Jonathan Soukup at Southwest Perennials in
Dallas, Texas, are constantly looking for ways to maximize production of their
starter plants. The father-son team produces over 300 varieties of primarily
heat- and drought-tolerant plants. The plants, 80 percent of which are
vegetatively propagated, are grown in 80,000 square feet of greenhouses at two
different locations. Plants are produced in 72- and 128-cell trays. One of the
things that the Soukups have done to run a labor-efficient operation is to keep
their cultural practices simple and repeatable.
Southwest Perennials produces around 4 million starter
plants annually. All of the young plants, both vegetative liners and seed plugs
and stock plants are grown in Berger BM6 standard growing mix to which RootShield is added.
“We’ve been using the same growing mix for nearly 10
years,” said Jerry. “The only thing we add is a layer of vermiculite on the top
of some seed-produced plug trays. The rest of the plants are grown in the
straight mix.”
LEDs have major
impact propagation

“At the 2013 Ohio Short Course, Hort Americas and Philips
Lighting were running a show special, buy 20 bulbs get 10 bulbs free,” Jerry
said. “We had heard and read about the benefits of LEDs so we decided it was a
relatively cheap investment to make to see if the lights had any effect on our
plants. We were on the skeptical side. I told Jonathan that we would invest a
couple thousand dollars on the lights and we’d see if there is any difference
with them.”
Jerry said it didn’t take long to see the benefits of the
LEDs on the plants. The bulbs were installed in mid-October and the plants
started to show the effects of the supplemental light in three to four weeks.
The Soukups were so pleased with the initial results that
they purchased an additional 70 bulbs.
“When we started in October, we were using 30 bulbs in
two houses,” Jerry said. “By March we were using 100 bulbs in 10 houses.

“There is nothing else that is currently on the market
that could have as dramatic an effect on our production as these lights have
had,” Jerry said. “This is for propagation. It may be a different situation for
growers who are finishing the plants. What is ideal for us may not be ideal for
another grower. For our situation, these bulbs delivered a response that we
couldn’t have imagined.”

The Soukups maintain three different temperature regimes
in their greenhouses. Some of the most significant results from the LEDs
occurred when plants were grown under the lights and temperatures of 70ºF-72ºF.

“Ceratostigma, lantana and Salvia greggi showed some of the greatest growth,” Jerry said.
“Some plants grew so quickly that we had to move them out to the edge of the
greenhouse so they didn’t receive as much light. Some plants were actually
growing too vigorously under the warmer temperatures with lights and we had to move
them to cooler houses where the temperatures were in the 40s and 50s.

“Some of the results that we saw under the lights we
wouldn’t have gotten by applying more fertilizer or increasing the
temperatures. It was simply the lights that were causing the plants to grow.”

Jerry said this is the first time that they didn’t
encounter any delays in plug growth because of cold temperatures and cloudy
weather.

“Previously there have been times in the propagation area
where cutting production would lag by 10-14 days in January, February and
March,” Jerry said. “This is the time of year when we really need to be
shipping the plugs, but they just aren’t ready. Usually the plants don’t have
enough roots. This year we didn’t see any kind of growth stall.

Jerry said this has been a good year for his company as
well as his customers located in the 48 contiguous states. Southwest Perennials
markets most of its plants primarily through brokers and distributors.

“Last year our sales dropped off a little bit compared to
previous years,” Jerry said. “But we have seen a major increase in sales this
year. Sales started strong in January, which starts our peak shipping season,
and they have continued even into the fall this year.
“Sales didn’t end in the spring, they continued into the
summer and we are continuing to have steady sales. We are currently shipping
plants that we normally don’t ship at this time of the year. We have been
receiving orders for delivery in November through March that we haven’t gotten
in the past. People are saying that they had a good spring and they’re excited
about having a good fall. Some people I have talked with say they think this is
going to be a trend that continues over the next four to five years and
potentially longer. The increase in construction is a major driver in the
demand for ornamental plants.”