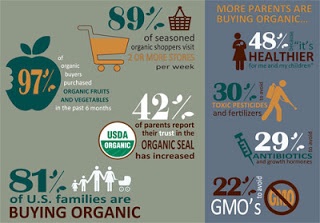 ﻿
Research at Kansas State University shows comparable size
and quality lettuce plants can be grown hydroponically with organic or
inorganic fertilizers.
By David Kuack
According to the Organic Trade Association’s “2013 U.S. Families’ Organic Attitudes and Beliefs Study,”
81 percent of U.S. families report they purchase organic products at least sometimes.
The study found that the majority of those buying organic foods are purchasing
more items than a year earlier. Those households that are new to buying organic
products represent 41 percent of all families.
The study showed that produce continues to be the leading
category of organic purchases. Ninety-seven percent of organic consumers
indicated they had purchased organic fruits or vegetables in the past six
months. Breads and grains, dairy and packaged foods all scored above 85 percent
among those who buy organic products.
Retailers should be particularly interested in the
results of the study. Organic buyers reported spending more per shopping trip
and shopping more frequently than those who never purchase organic food.
This month national retailer Target
announced its plans to begin offering a new line of organic products called
Simply Balanced. The line is an outgrowth of similar products within its existing
Archer Farms store brand. The Minneapolis-based company plans to boost its
organic food selection by 25 percent by 2017.
Comparing organic,
inorganic fertilizers

With the increased interest in organic produce by growers,
retailers and consumers, researchers at Kansas State University looked at the
production of hydroponically-grown lettuce using organic fertilizers. Jason
Nelson, who received his Master’s degree this year, said the purpose of the
research was to study overall plant performance with organic and inorganic
fertilizers. Another aspect of the research was to study the effects of
commercial microbial inoculants that are marketed to promote plant growth.

“Comparing the amount of nutrients in the inorganic fertilizer
to the organic, it makes sense that this growth difference occurred,” he said. “There
was more nitrate in the inorganic fertilizer, so there was a better nitrogen
balance from the start and the plants grew and matured a little faster and were
probably about five days earlier to harvest in the summer and fall trials.
“The limiting factor with the organic fertilizer is the
nitrate. If a grower added some calcium nitrate to the organic nutrient
solution the plants would catch up to the inorganic plants. I expect it would
only take a small amount of nitrate, 30-50 ppm, for the organic plants to match
the growth rate of the inorganic plants.”
Lettuce grown with the four Kimitec products and
potassium magnesium sulfate were comparable to the inorganic plants in size and
fresh weight. However, the inorganic plants consistently had a higher dry
weight than the organic plants.
“The heads of lettuce looked comparable in size,” Nelson
said. “If a consumer was buying a fresh head of lettuce they wouldn’t be able
to tell the difference between the organic- and inorganic-fertilized plants.”
One area where there was a noticeable difference was in
the taste of the lettuce. Nelson said that the inorganic-fertilized lettuce is
going take up nitrate nitrogen, which is going to be deposited in the leaves.
“There was definitely a flavor difference between the
inorganic and organic plants,” he said. “I attribute the flavor difference more
to the nitrate level than anything else since the other nutrient levels were very
similar between the inorganic and organic plants. The petiole nitrate level was
much higher in the inorganic plants. The flavor was much heavier. We did an
informal classroom taste-test with students and that was a common response. Many
of them preferred the taste of the organic lettuce over the inorganic lettuce.”
Nelson said the use of microbial inoculants with both the
inorganic and organic fertilizers didn’t appear to have any effect on the
growth of the lettuce plants.
“The plants that we were growing were under a relatively
stress-free, temperature-controlled environment,” he said. “I really didn’t see
any difference in the studies with the inoculants except in one circumstance.
That was when the solution nutrient levels were incredibly low. The inoculants
actually had some nitrogen bound up in kelp meal as part of their constituents.
I saw some growth differences in that instance.
“Mycorrhizal fungi take about eight to 10 weeks to become
established and colonize the plant roots. For crops like lettuce which finish
as quickly as four weeks, a mycorrhizal inoculant isn’t going to become active
within such a short production cycle.”
Managing fertilizer
solution pH

Nelson said one of the biggest challenges facing growers
who are trying to grow in an organic hydroponic system is pH management.

“The Kimitec line of products was able to provide an
adequate amount of nutrients for the plants to grow. But the nutrient solution
required more pH management,” Nelson said. “Managing the pH is the biggest
challenge with organic fertilizers because a grower can follow the recommended
rates so the proper amounts of nutrients are available, but the pH fluctuation
is so much more pronounced than it is with inorganic fertilizer treatments.
“It depended a little on plant size, but the nutrient
solution pH for the inorganic plants was adjusted on average maybe once a week.
For the organic plants, at minimum I was checking the solution pH and electrical
conductivity at least once a day whether I was making any changes or not. Some
days I would check the pH twice. If I checked the pH, adjusted it to what I
wanted, by the next day I would have to add acid to bring the pH back down
because it would increase overnight. Somebody might be able to stretch that to two
to three days. When the plants were young, I was checking every day and
adjusting the organic solution pH every day. That’s what the organic solution seemed
to require.”
For more:
Jason Nelson, jsn0331@k-state.edu. Kim Williams, Kansas State University, Department of Horticulture, Forestry and
Recreation Resources; kwilliam@ksu.edu. http://krex.k-state.edu/dspace/bitstream/handle/2097/15574/JasonNelson2013.pdf?sequence=5
David Kuack is a freelance technical writer in Fort
Worth, Texas; dkuack@gmail.com.