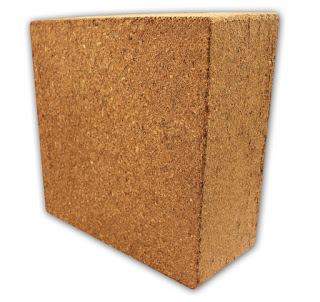 Proper processing of coir to lower its natural high salts level should eliminate the need to buffer it with calcium nitrate.

By David Kuack
Coir has become a major component of both greenhouse vegetable and container crop production. It can be used by itself, for instance in grow bags, slabs and propagation cubes, or it can be used in growing mixes with other components like sphagnum peat, perlite and bark.

Coconuts, which are produced by coconut palms (Cocos nucifera), consist of husks that surround the nuts. The nuts are consumed as food and the husks are used to
produce various types of coir growing substrates, including chips, chunks and peat. Coir peat is a by-product of the husk fibers that are used to fill cushions and car seats.

Naturally high in salts
Dr. Hugh Poole, international agricultural consultant, said coconut coir is initially high in sodium, potassium and chloride salts.
“Where the coconut coir originates from can have an impact on the salt levels,” Poole said. “Coconut palms produced inland away from the ocean may not accumulate as much sodium, potassium and chloride, but growers should assume that all coconuts will have high salt levels.
“These salts are relatively soluble and are not totally bound by the coir so they are easily leached. Most coir producers use rain water for most of the year to remove the salts. If the EC (electrical conductivity) level is below 1.0 milliSiemens per centimeter (mS/cm), growers should not have to leach the coir. In most cases, the coir producers have already leached the coir for the growers. It should be ready to use. If the salts level is high, then the coir producer has not done its job. A producer should be able to provide growers with the coir’s EC value, its pH value and other information, including percent moisture, as well.”
Poole advises growers using coir to test for soluble salts before it is combined with other mix components and before any plants are placed in the coir.
“If the level of salts is low, then a grower doesn’t need to worry about sodium, potassium and chloride,” he said. “Many growers say the soluble salts level should be less than 1.0 mS/cm. Others say the salts level should be less than 0.5 mS/cm. It really comes down to how the coir is going to be used. If Ellepots are going to be filled with coco peat for young seedling production, then the soluble salts level should be around 0.5 mS/cm. If the coco peat is being blended with sphagnum peat, perlite or some other growing mix components and plants are being transplanted into containers, the coir soluble salts level can be higher. I have seen EC values as high 3-6 mS/cm. In these instances, unless the coir is being diluted with a lot of other mix components, growers would certainly want to leach the coir before it is used.”
Poole said growers who ask their suppliers for a low EC coir is similar to asking for a low EC peat moss or compost.
“If growers have to deal with a growing mix component with an EC level that is always bouncing around, it is going to be very challenging for those growers from crop to crop and from year to year,” he said.
To buffer or not to buffer
Poole said some growers are asking suppliers to buffer their coir with calcium nitrate.
“These growers are thinking that the cation exchange sites are loaded with potassium and sodium ions and if the coir isn’t buffered with calcium nitrate then their crops may suffer a calcium or magnesium deficiency,” he said. “These types of deficiency problems are more commonly encountered with hydroponic systems. If a substrate is being used, then this usually isn’t a concern.
“Most of the coir’s exchange sites are tied up with sodium and potassium. These ions are readily replaced by calcium. If calcium is applied, much of that calcium is going to be tied up in the exchange capacity taking out sodium and potassium. Therefore calcium is not in the substrate solution for utilization by the plants. There is a lag before the cation exchange capacity can be fully charged with calcium, potassium and magnesium. If a grower isn’t cognizant of this lag and doesn’t address it, it can cause deficiency problems. When 50 ppm calcium is incorporated in the fertilizer solution, the leachate may only contain 10 ppm calcium. Not that the plants utilized the other 40 ppm. Much of that 40 ppm was tied up at the exchange sites and will be available later.”
Avoiding deficiency problems
Poole said if the coir’s EC level is initially low and growers apply a Cal-Mag fertilizer at the beginning of a crop, there shouldn’t be deficiency problems. He said growers using reverse osmosis water, in which there is no calcium or magnesium, should make adjustments in fertility especially if they are producing a fast growing crop. Although no deficiency problems might occur, Poole said growers should be diligent in monitoring fertility levels.
“Once the cation exchange sites are charged with calcium and magnesium, then there is free exchange and there shouldn’t be any problems,” he said. “In the first two to four weeks, growers should probably start out with higher calcium and magnesium levels if they’re growing with coir. They should try to favor calcium and magnesium absorption at the exchange sites. This
is a precautionary step.”
Poole said growers, who are using coir and are planning to use a 20-10-20 fertilizer, need to be aware that this fertilizer does not contain any calcium, magnesium or sulfur.

“The growers are going to have to add these nutrients,” he said. “If growers are using coir they have to recognize that the exchange sites need to be filled or charged with calcium and magnesium before there starts to be a free exchange of nutrients back and forth.

“With coir where the exchange sites are filled with sodium and potassium, the only way of removing these ions is by reducing them with leaching with water or by overcompensating with calcium and magnesium.”

Poole said initially, the natural salts found in coir must be leached with water. The remaining salts will be exchanged with calcium and magnesium by a buffering treatment or with elevated levels in the fertility program. He said buffering is not an option for organic growers.

“If coir is washed well and its EC is below 0.5 mS/cm or lower, then the coir shouldn’t have to be buffered for most crops. If calcium nitrate is used to buffer the coir, magnesium has to be provided as well.”

Poole recommends growers should review both their water analysis and their fertilizer analysis to know what nutrients they are applying and to confirm nutrient levels.

“Young plants and bare-root plants are more sensitive to high salts than to short-term nutrient imbalances,” he said. Long-term crops should be monitored using tissue analyses to optimize plant nutrition and crop productivity.