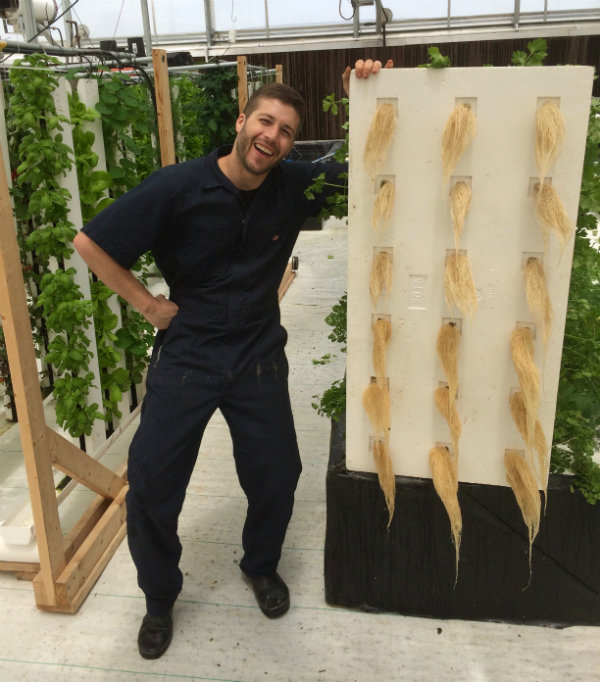 Growers have affordable options for ensuring plants receive sufficient oxygen in hydroponic production systems to maximize growth and to reduce the chances of disease.

Oxygen is critical in the development and growth of edible crops grown in hydroponic systems such as nutrient film technique (NFT) and deep water raft culture. Tyler Baras, special projects manager at Hort Americas, is studying methods of adding oxygen to both conventional and organic hydroponic production systems in the company’s 12,000-square-foot research and demonstration greenhouse in Dallas, Texas.

In the conventional production systems Baras is studying he has installed water pumps with a Venturi attachment to add oxygen to the nutrient solution reservoir.

“The pumps aren’t injecting air into the irrigation lines, but simply into the reservoir to circulate the water and to create a circular flow within the fertilizer reservoir,” he said. “As the pumps operate they draw in air through a ¼-inch emitter. There is the benefit of moving around the solution and the air being drawn in increases the level of dissolved oxygen.”

A method that organic growers use to increase oxygen levels is cascading the water when it returns to the reservoir. As water returns it is allowed to fall and break the surface of the reservoir so that the water can pull in oxygen.

“Most of the water uptake in plants is passive,” he said. “But there is a stage where the plants use energy to actively pull up water through the roots. This requires oxygen. If there isn’t any oxygen in the root zone no water will make it up through the roots to the top of the plant. Low oxygen in the root zone can appear as wilting at the top of the plants. This can seem counterintuitive in a hydroponic system because the roots are sitting in water, but the tops of the plants look like their wilting if there isn’t any oxygen in that water.”

Baras said the need for oxygen in an organic hydroponic system is even more important because of the presence of living microbes in the fertilizer solution reservoir.

“These microbes also require oxygen,” he said. “The oxygen demand is often higher in organic systems than conventional systems because not only do the plant roots need oxygen, but the microbes need oxygen as well. In an organic hydroponic system one of the best ways of keeping biofilm in check is to keep the beneficial microbes happy.”

Baras said most of the oxygen measurements he has been taking in his research have been showing very similar oxygen levels for both conventional and organic production systems when the crops are performing well.

“I have been aiming for a level of 7-12 parts per million (ppm) dissolved oxygen, but generally the readings fall between 7-9 ppm,” he said. “I’m using a ProODO meter from YSI that is a very sensitive piece of equipment that accurately measures dissolved oxygen.”

Although most hydroponic growers are concerned with maintaining adequate oxygen levels, Baras said if too much oxygen is added to the solution it can cause root stunting.

“I haven’t reached that threshold yet in my trials,” he said. “It’s crop dependent on what that level is. When there is too much oxygen the roots have less motivation to grow larger because they are getting everything they need with a smaller surface area. That can then translate to the plants producing less biomass resulting in less leaf tissue. So at some point too much oxygen can actually cause less growth. For crops like tomatoes, peppers and cucumbers the whole plant would be stunted.

“The only way growers could reach excessive oxygen levels that damage the plants are when liquid oxygen or possibly ozone is used. Using air pumps or air stones to add oxygen, the levels won’t be high enough to stunt plant growth. To reach higher oxygen levels of 15-16 ppm, a grower would have to use other methods like liquid oxygen and ozone. It’s very difficult to reach high oxygen levels above 10 ppm unless an alternative method is used beyond air pumps, Venturis and cascades. I haven’t seen any growers go much higher than 8-9 ppm using the conventional methods.”

Baras said growers using a deep water raft system could try increasing turbulence in the pond to increase oxygen level. However, too much turbulence can sometimes cause damage to the roots.

“The roots in the turbulent areas are the ones that often times grow poorly,” he said. “The plants that are near the irrigation outlets where the currents are stronger, they have the poorest root growth. Sometimes growers will use air pumps in their ponds and those plants directly above where the air stones are located grow poorly.”

Chat with us!
X