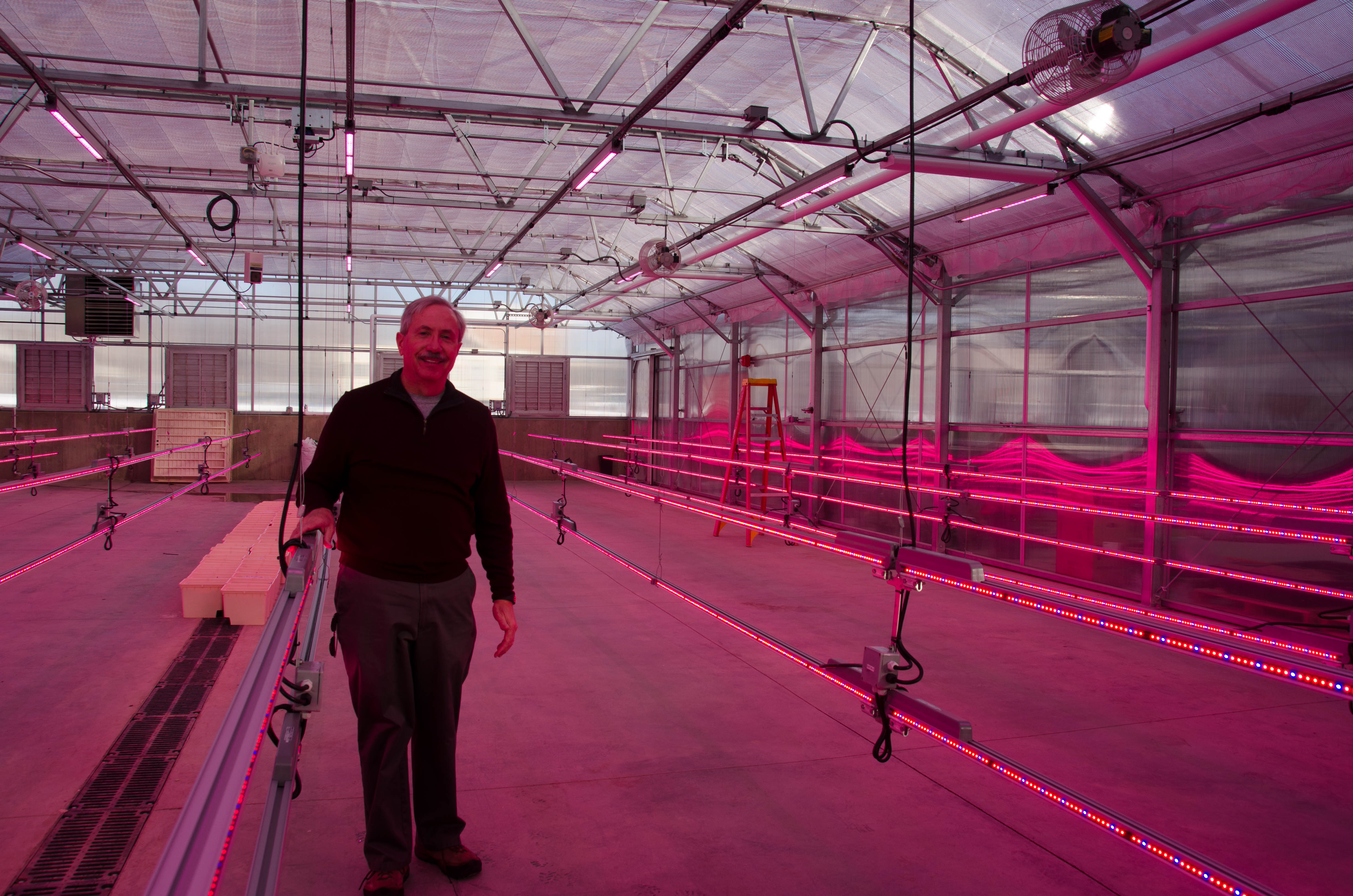 An agreement between Colorado State University and Philips Lighting to equip its new 27,000-square-foot horticulture center with LEDs will put the focus on using the lights for improving ornamental and vegetable plant production.

When officials at Colorado State University went looking for property to build a new football stadium they didn’t have to look far. They decided that the land on which the 65-year-old W.D. Holley Plant Environment Research Center resided was the perfect location for the new stadium.

“The old horticulture facility, which had been built in 1949, was considered a hot property by school officials,” said Steve Newman, who is greenhouse crops extension specialist and professor of floriculture. “To replace the old site, the university provided the department with a new $7.5 million 27,000-square-foot research and teaching facility. There is also a 3-acre outdoor area for plant trials.

“The horticulture center was built in eight months. The university facilities team that I worked with to design and build the center was awesome.”

The 21,000-square-foot greenhouse is divided into six bays. All of the bays are connected by a ventilation corridor that has a 20-foot high gutter line. One bay will contain a Crop King NFT trough system consisting of six modules. The other half of the bay will be equipped with a traditional raft culture set up that has six 5-foot by 10-foot rafts.

“I’m a hard core supporter of Colorado companies,” Newman said. “We are also trying to make the greenhouse as energy efficient as we can.”

“Ron visited me on the same day I was given permission to talk about the budget for the center,” Newman said. “The timing was perfect. He asked me what kind of LED research CSU wanted to do and I asked him how committed Philips was to supporting LED research at the university. He said let’s equip the facility with Philips lighting and we’ll do research projects together.

“The greenhouse is being equipped with the latest Philips horticulture LED fixtures, including top lighting, interlighting and flowering lamps. One house will have suspended interlighting modules for high wire vegetables. We are looking at being able to do all kinds of ornamental and vegetable plant research using different combinations of the fixtures.”

Crops to be studied

Newman said it hasn’t been determined yet how much of the greenhouse space will be dedicated to ornamental and vegetables crops.

“I expect the research is going to be about 60 percent ornamentals and 40 percent vegetables, but that could change,” he said. “Initially the greenhouse vegetable production will be used primarily for teaching and demonstration. We will get into the vegetable research later.

“Our primary focus initially is going to be on ornamental plug production and reducing plant bench time after transplanting. This includes whether we can grow better quality plugs using LEDs with less plant growth regulators. We will be looking at root development under LED lights, trying to increase rooting and production efficiency. This includes trying to improve rooting of stage 4 tissue culture propagules coming out of overseas production.”

“Northern Colorado is becoming a central location for craft breweries,” Newman said. “There is a lot of interest in locally grown hops for the craft breweries.

“The 20-foot high ventilation corridor is ideal for growing hops. We are redesigning and reconfiguring to install the LED interlighting in order to get good vegetative growth. The hops plants will receive natural light from above and the LED interlighting between the rows. The local craft brewers are very interested in the hops research that we are planning to do.”

Newman said that Philips has some of its own research agenda items that it would like to study in the horticulture center.

“The Philips research team I’m working with is very grower-oriented. The company is interested in finding out how many LED lights does it take to produce a bedding plant crop more

efficiently. How LEDs can be used to produce better quality plants. Meanwhile we will be doing our own research taking advantage of the lights. The hops research was not an agenda item for the company four months ago. Bauerle went to company officials and said let’s do this hops research and they agreed that it was worth doing.”

Newman said that Philips is interested in looking at vegetable production for the warehouse farming market, which it refers to as its city farming program.

“Unfortunately we don’t have the type of facility set up to do the warehouse style growing on site,” Newman said. “I would like to see us go into that type of production eventually. Initially with our vegetable crops we will look at biomass production. We will be putting in NFT lettuce trials.

“We also want to study nutraceutical compounds, including vitamins, and if LEDs can increase the production of nutraceuticals in vegetables. I am working with my colleagues in the horticulture and food science departments looking at the mouth feel in regards to high quality lettuce production. We will also probably look at tomatoes to increase production efficiency, plant yield, and lycopene development in the fruit. We will probably start looking to do that research in the fall.”

Newman said he is in negotiations with the university’s dining services department to produce vegetables for its dining centers.

“I am in negotiations with dining services, which is looking to start vegan salad bars in the dining halls,” he said. “Dining services wants to put in salad bars with as much produce as possible grown in Colorado. They would like to have a certain percentage of that produce be CSU student grown. We are going to redo our student farm to try to accomplish that during the growing season. We will also be trying to grow as much of the leafy greens in this new facility to provide to the dining services’ salad bars.

“I am also working very closely with a university environmental hygiene staff person. We have to be sure that we are in compliance so that whatever produce we sell to the dining halls is as safe as it needs to be. We have to set up a good agricultural practices (GAP) plan and to review the guidelines of the Food Safety Modernization Act that just went into effect. The students who are growing the produce have to be trained in the exact practices they need to follow to deliver quality, safe food. The students have to be taught the proper ways of growing and handling food from the greenhouse to the table. All of the practices that we have to incorporate are the same as if we were going to sell the produce to a retail grocery store.”