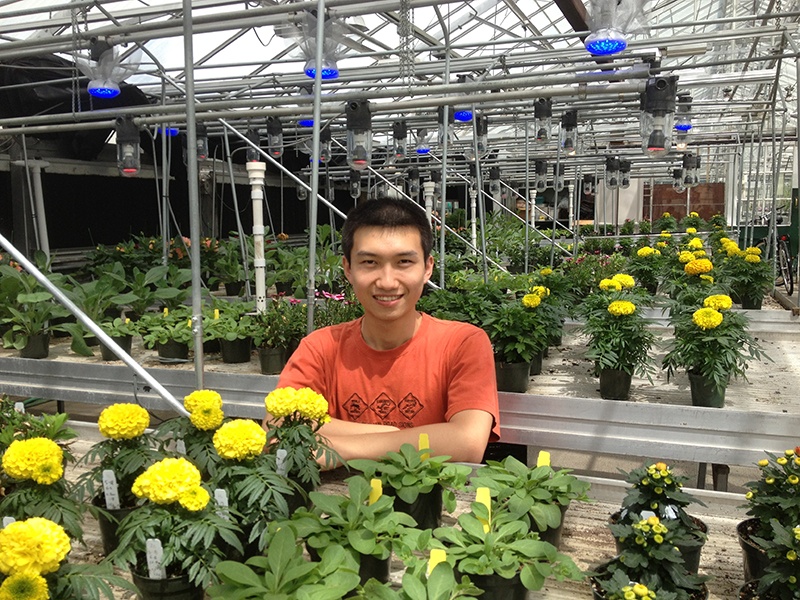 Research at Michigan State University shows growers have a choice when it comes to lights for photoperiodic control.

As light bulb manufacturers phase out the production of incandescent bulbs, growers are looking for replacements to control flowering of ornamental plants. Researchers at Michigan State University have compared the efficiency and efficacy of LEDs for flowering applications with traditional light sources including incandescent, fluorescent and high-pressure sodium lamps.

“After we determined that LEDs were as effective at controlling flowering as other traditional light sources, we began to look more closely at how different wavebands emitted by LEDs actually regulate different aspects of flowering and photomorphogenesis,” said Michigan State Ph.D. graduate research assistant Qingwu (William) Meng. “In our experiments we used experimental LEDs manufactured by a company in Japan called CCS and commercial LEDs from Philips Lighting. For this particular study we used four different LEDs that are commercially available to growers to control flowering.”

Meng used an Apogee spectroradiometer to collect data from the four different LEDs.

“We measured the spectral output from 350 nanometers to 850 nanometers,” Meng said. “We were able to measure the total light intensity from each of the four lamps to quantify the exact spectral distribution.”

Meng said he did not compare the light output data he collected with data reported by the light manufacturers.

“It is relatively difficult to find light intensity data from some of the light manufacturers,” he said. “What some companies report in regards to light output is the total photon flux from the light source captured by an integrating sphere device that we don’t have here at Michigan State. Others show a graph of the emission spectrum, but the spectral data are not available.

“For greenhouse flowering applications the lamps can be installed at different heights. Depending on the distance between the bottom of the light source and the plant canopy, there can be different levels of light intensity. Even though a light may be advertised to have a very high light output, if the lamps are hung high above the plant surface then growers are going to get a lower light intensity at the plant level. It is very situational and depends on how far apart the lights are spaced out in the greenhouse and how high the lights are installed above the plant canopy.”

“Growers can take one light and then measure the light output at different points under the light. By measuring the light distribution, growers can determine where the highest output and lowest output occur under the lamp. If growers don’t have the expertise to develop a light map, they can consult lighting experts.”

Some lighting companies have developed software to design light maps.

Meng said for effective photoperiodic control only 1-2 micromoles per square meter per second (µmoles/m2/s) at plant height is needed either to promote flowering of long-day plants or inhibit flowering of short-day plants.

“For specific wavebands, red light is the most prominent in terms of regulating the flowering pathways of plants,” he said. “The four LEDs lamps we tested that are all marketed for flowering applications, all have some level of red or red/far-red light. If red or far red are the predominant wavebands, then 1-2 µmoles/m2/s should be effective for most flowering crops.

“In contrast, if only blue light, which is from 400-500 nanometers, is used to regulate flowering, there won’t be any effect if a low intensity of 1-2 µmoles/m2/s is provided. Blue light at 1-2 µmoles/m2/s doesn’t create long days for a variety of photoperiodic crops. However, when the intensity of blue light is elevated to 15 or 30 µmoles/m2/s, blue light is able to regulate flowering as effectively as red or as a red/far red combination. Overall, the efficacy of a lamp depends on its light spectrum.”

Meng said for different ornamental species or cultivars there are different sensitivity levels in terms of the light spectrum that should be used to control photoperiod. He trialed about 20 different photoperiodic ornamental crops popular with commercial growers.

He said for petunias, plants flower earlier under red light, but with both red and far-red light, flowering can be promoted even more.

“In order to achieve the benefits of photoperiodic lighting to promote flowering of long-day plants, growers should look at the crops they’re producing, and then decide what kind of spectrum the LEDs should have to provide the maximum capability of flowering promotion,” Meng said.

LightHort is a science blog created by Qingwu (William) Meng to communicate the latest scientific findings on light in horticulture to the public. Meng is working with graduate students from various institutions, including Michigan State University and Purdue University, specializing in photobiology and horticultural lighting to employ various forms of multimedia to effectively deliver scientific ideas worth sharing. A variety of topics are covered ranging from sole-source lighting for plant factories to photoperiodic and supplemental lighting for greenhouse operations. Follow LightHort on its website, Facebook and Twitter.