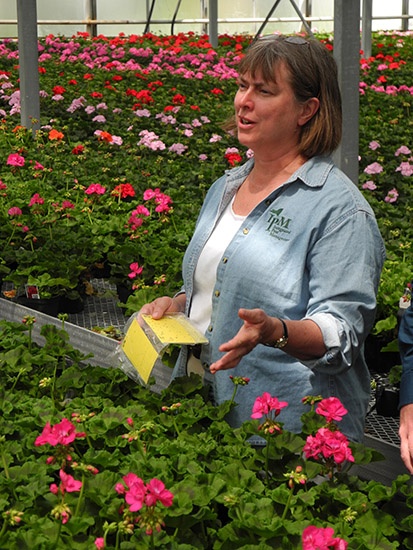 Greenhouse Scout is an integrated pest management app that makes it easier to collect, store and analyze scouting data along with identifying insect pests and which beneficials can be used to control them.

Most greenhouse growers know the benefits of scouting their crops for pest insects and mites. Scouting can help to identify and minimize pest outbreaks, reduce plant damage and crop losses and save on pesticide and biological control costs.

“Incorporating beneficial organisms for insect and mite management in greenhouses is not something that growers can just jump into,” said Elizabeth Lamb, ornamental IPM coordinator at NYS IPM Program. “A lot of information is required for someone trying to successfully do biocontrol. Once it becomes part of the production system it can work, but getting started is the hard part. We didn’t see one good way of putting all of the information together in a relatively easily accessible format.

“We initially started putting the information together in a notebook. We said this is great, but we knew people weren’t going to carry the notebook into the greenhouse. When we started asking growers if they would like this as an app, something they could carry on their smart phones, we received a lot of positive responses. That’s how we decided to develop the app.”

NYS IPM Program staff began working with GORGES Inc. in Ithaca, N.Y., to develop the app program. The funding to create the app came from a USDA National Institute of Food and Agriculture grant.

“The company asked me during the initial discussion if we wanted to make the app interactive so that is when we decided to add the scouting and record keeping functions. The app really has two applications. In addition to the scouting function, it’s a source of information for pests and pest identification and for beneficials identification and usage. Even if a grower is not using the app to collect scouting data, it can be used to identify common greenhouse pests like green peach aphid. The app will also determine what beneficials can be used, how to apply them and the environmental factors that need to be considered. All of that information is available on the app.”

Lamb said that even though the app was initially developed for greenhouse ornamentals, it could be used with greenhouse vegetables and other protected environment crops.

Lamb said even though growers are good about identifying pest problems on their plants, they can have a difficult time tracking the data, especially from year to year.

“We are trying to help growers make scouting easier so that they will do a better job of scouting,” she said. “If a grower is walking through the greenhouse and sees something, he can easily take out his smartphone, go to the app and put that information in. If a grower is doing more organized scouting, the app can be set up to do scouting in specific locations. If there are multiple scouts collecting information all of that data can be inputted simultaneously.”

One of the biggest scouting gaps the app can help eliminate is determining the effectiveness of pesticide and/or beneficials applications.

“At the same time the app is used to note numbers of pest insects and beneficials, it can also be used to record applications of beneficials or pesticides,” Lamb said. “While the app does not include recommendations on what pesticides to use to manage a particular pest, those active ingredients labeled for New York State are listed.”

Although scouting information is being written down on paper or in a notebook, Lamb said having all of this data doesn’t indicate whether beneficials and pesticide applications are working.

“Growers might have a general idea if they are seeing fewer or more of a particular pest from the previous week,” she said. “The app offers growers the ability to look at the scouting data on graphs so they can see whether the pest numbers are going up or down. This gives growers more information to use in terms of deciding what to do.

“We are hoping to reduce pesticide applications by encouraging the use of biological controls. However, if growers are using the app to scout and are only applying pesticides, we would hope that they would also be able to reduce their pesticide use. Growers can use the app’s graphs to determine a pesticide’s effectiveness so that they don’t over apply. If a pesticide is not particularly effective, growers can come back and apply something else.”

Lamb said being able to print the graphs enables growers to keep a running record of what has happened with their crops in previous years.

“Growers can see if there is a pattern for a pest,” she said. “Whether a pest keeps coming in at the same time on the same crop. Growers usually remember those kinds of things, but it’s nice having a resource they can refer to to see what controls actually worked.”

Lamb said the app was designed to be used in all size greenhouses.

“If growers have an internet connection the recording of the scouting data to their computer is automatic,” she said. “If growers don’t have an internet connection in the greenhouse, the app holds the information until the connection is made. It doesn’t have to be plugged into something else. The data is synced directly into the computer. If there are four workers scouting simultaneously in different greenhouses, they can input data on the same account. Growers could sit in their offices looking at what is going on with pest management in all of those greenhouses at the same time.

“The only thing growers need to add is their locations. A location could be designated as Greenhouse 1, Section 1, Bench 1. In some cases growers move their crops around and five different crops may move through that area during the production season. In that case, it might make more sense to call a crop by its name such as pansies. Pansies may move from Greenhouse 1 to Greenhouse 2 and then they move onto sales. The intention was to make the app as flexible as possible. Growers can use the data from year to year if it’s something that makes sense for their operation.”

Lamb said she has received requests to translate the Greenhouse Scout app. She is currently working with GORGES to find out the costs involved with translating the app into Spanish and French. She is also working on apps for conifers and greenhouse hops that will include both insect and disease pests.