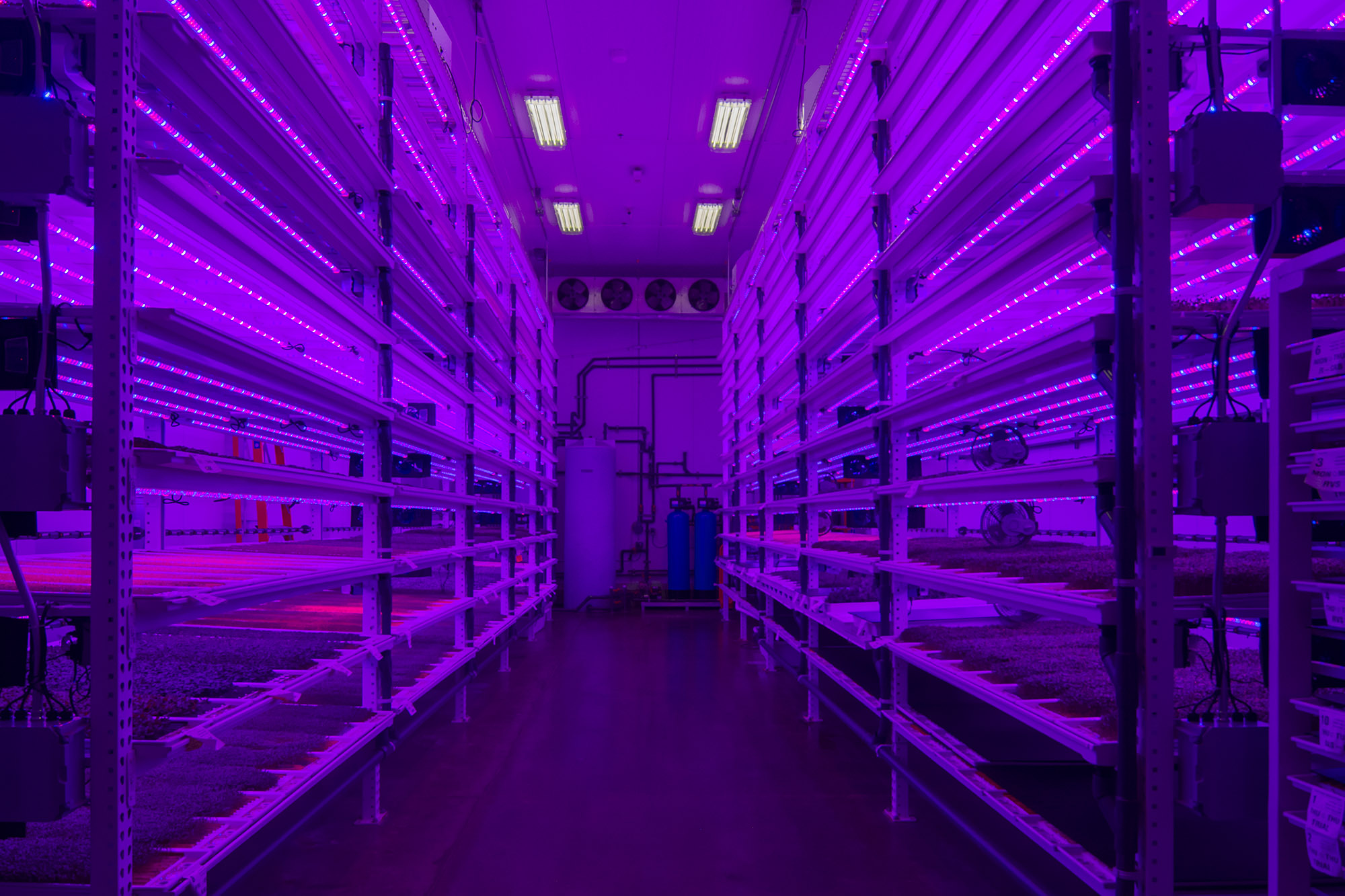 Production of 20-25 different varieties of microgreens and herbs on a weekly basis.

Dan Albert, founder and general manager at Farmbox Greens, began growing microgreens and culinary herbs in 2012. He was growing them in a vertical farm set up of his own design in a 500-square-foot detached garage next to his home in West Seattle, Wash. Albert marketed his product locally to restaurants, farmers markets, a food distributor and independent retailers.

Albert initially began growing with an aeroponic production system, but transitioned to a self-designed vertical farm with LED lighting and recirculating nutrient film technique (NFT) irrigation. The vertical farm consisted of grow racks, one with three levels and another with five levels of production.

In October 2016, Farmbox Greens was acquired by Seattle-based produce distributor Charlie’s Produce. The full service distributor has facilities in Seattle and Spokane, Wash., Portland, Ore., Boise, Idaho, Anchorage, Alaska, and Los Angeles, Calif. It services customers along the West Coast and into Canada. 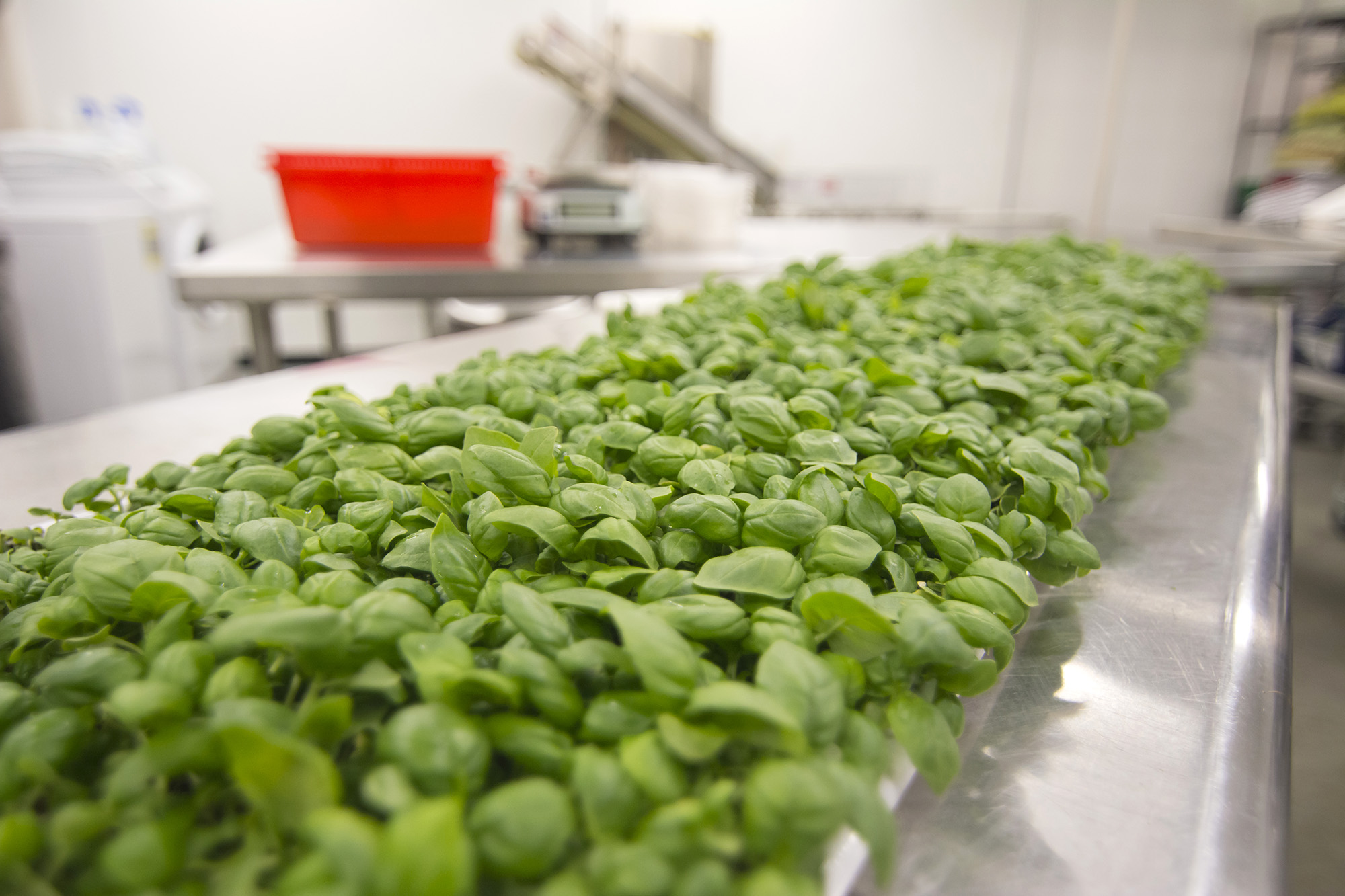 “The building metrics for the GE ARIZE LEDs, their length and how many could be strung together worked well for design needs. There definitely were a lot of advantages with installing the GE LEDs.” 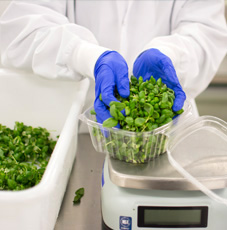 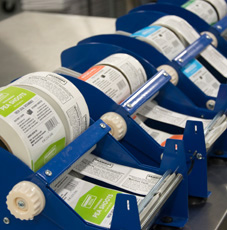 Albert moved all of Farmbox Greens production from his garage to one of Charlie’s Produce’s warehouses.

“We have a grow room, a harvest room, storage area and a germination area. Everything has been scaled up significantly,” Albert said. “The warehouse is in Seattle on the Charlie’s Produce campus. Our distribution hub is next door. Subsequently we are able to sell to a lot more customers.

“When we were growing inside of our garage we were able to access 50-100 customers. As we were scaling up we kind of hit a point where transportation logistics and customer logistics and sales, all of these things were becoming bigger factors than the actual farming. That’s when I realized the benefits of partnering and being a part of a distribution company like Charlie’s because it has so much reach and has logistical aspects of the business dialed in. We are really trying to follow a vertically integrated business model where we are just in time to meet the needs of Charlie’s customers and its sales to restaurants and retailers. This keeps our products consistently fresh and reduces waste.”

Farmbox Greens is now selling its products to thousands of customers. In order to meet the demand from a much larger customer base Albert had to expand his production.

“We built a new facility in one of Charlie’s warehouses and set up our racking system,” he said. “We essentially rebuilt our whole farm in a new location over the last year. We are currently running two racks that are 10 levels high. It’s about 10 times the production capacity that we had at our old vertical farm facility.”

Albert is using a modified nutrient film technique system similar to the one he used in his old facility.

“We have done some custom manufacturing and are working on the intellectual property side as well,” he said. “There are definitely some unique components. It is much more rigorous than our last system. It took everything that I learned from dealing with our self-built system and made it more user-friendly. Our production efficiency is higher especially in the grow room.”

“One of things I wanted to do when we built this new farm was to simplify the process and not have multiple systems that may be doing different things at a given time,” he said. “One of them was the installation efficiency of the GE LEDs. If we were to have used the old LED lights that we had been using, we would have had to retrofit them. The time that it took to install the old LEDs, I felt that it would be better to have just one system with one set of characteristics than to have multiple systems, some old and some new and then always having to be able to manage that.

“I thought it would be easier to just install the GE LEDs. The efficiency in the way the GE lights went together was a big selling point for me. I worked with Hort Americas and trialed the GE LEDs. The physical time it took to install the electrical system was less by a fair bit. The GE LEDs were also less expensive to install because we didn’t have as many clips, junction boxes and wire connectors that were required to install the LEDs we had been using. We were able to daisy chain the GE LEDs together and we were good to go. It worked out really well.”

Albert said he has been happy with the new farm setup and how the production system consistently works.

“For Farmbox Greens it’s all about being able to understand that when a crop is planted being within a few percentage points of how much product we have at the end of the growing cycle,” Albert said. “In order to do that it’s all about consistency.

“We are always evaluating the size of the crop and how it looks, its texture and its taste. Every time we make a change we may see some differences. But with the level of completeness with this new system the biggest thing is that we can rely on a crop when it finishes. With our old system a longer growing crop may have taken 15 or 16 days to be ready. When you’re trying to hit production schedules that rely on customers to buy products, for you to be a day or two late in a just-in-time system is problematic. Smoothing the production curve out has been really essential for us. With the crops growing faster that’s great, but we have to adjust for it. It doesn’t necessarily mean that we are always getting more turns in the system. It just means that we are more consistently getting crops off the system.”