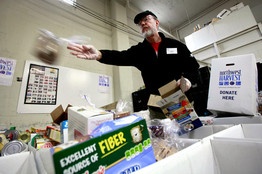 The U.S. Agriculture Department said Monday the number of households that reported struggling to buy enough food in 2008 jumped 31% over the previous year.According to the USDA’s annual poll, 17 million U.S. households reported some degree of food insecurity in 2008, up from 13 million households in 2007.

“It is time for America to get very serious about food security and hunger,” said Agriculture Secretary Tom Vilsack, who is pressing Congress to expand such programs as food stamps and free school lunches that consume roughly 70% of his department’s budget.Comparable numbers for 2009 aren’t available yet. Officials with organizations involved in feeding the hungry say the survey results square with growing demand at food pantries: the number of people seeking help this summer is up an average of 30% from the summer of 2008, according to a recent survey of food banks by Feeding America, a food-bank network.The 2008 survey results suggest that almost 15% of U.S. households had trouble putting enough food on their tables, up from 11% in 2007; the proportion is the highest detected by the survey since it began in 1995. Put another way, about 49 million people, including about 17 million children, worried last year about getting enough to eat.Maura Daly, vice president of government relations for Feeding America, said 90% of food banks in the recent survey reported that, according to anecdotal evidence, unemployment is the leading factor for the increased demand.

U.S. consumers in 2008 also saw a sudden acceleration in the cost of food. While the food inflation rate has stalled this year, some economists are worried that the move by many recession-weary farmers to cut production might ignite grocery prices again next year.The global recession is helping swell the number of hungry people around the world to the highest levels since the early 1970s.But the way USDA economists measure food worries in the U.S. is far more liberal than their gauge for other nations, where people are labeled food insecure only if they consume fewer than 2,100 calories a day. Few of the U.S. households labeled as food insecure by the USDA have it that tough.Instead, the USDA’s domestic survey tries to quantify the number of households that have difficulty providing enough food at some time during the year. Many of these families are able to avoid hunger by participating in such federal nutrition programs as food stamps, or by having their children participate in a free school-lunch program.Still, the USDA survey indicates that someone in about one-third of food-insecure households experienced some hunger or came very close to it in 2008. In these households with very low food security, food consumption fell and normal eating patterns were disrupted.According to the survey, 6.7 million U.S. households had very low food security in 2008, up 43% from 4.7 million households in 2007.