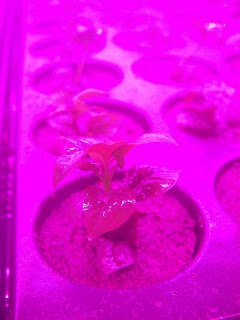 U.S. researchers are looking at the potential benefits to
the propagation and production of greenhouse ornamental and vegetable crops
using LED lights.

By David Kuack
Although U.S. researchers have started studying the
effects of LED lights on the production of greenhouse ornamental and vegetable
crops, much of the data being used by American growers comes from studies done
in Europe. Purdue University horticulture professor Cary Mitchell said that studies
currently being done in the United States will provide growers with information
that is relevant to their production and climatic conditions.
Mitchell is leading a team of university researchers who
have received a $4.9 million grant, including $2.4 million from USDA, to study
LED lighting for greenhouse applications. Mitchell along with Purdue
horticulture professor Roberto Lopez is working with scientists and engineers at
the University of Arizona, Michigan State University, Rutgers University and
Orbital Technologies Corp. Mitchell is working with graduate student Celina
Gomez to study the impact of LED lights on the propagation and production of
high-wire tomatoes. Lopez and graduate students Christopher
Currey and Michael Ortiz are studying the use of LED lights on bedding plant
cuttings and plugs.
Propagation trials
Due to limited greenhouse research space, Gomez is using
one bench to compare the effect of providing supplemental light from a high
intensity discharge lamp or from LED lights with control plants that receive
only natural daylight. During the first year of the propagation study, Gomez is
conducting an experiment every month. The experiment includes a control group
of tomato seedlings that receive no supplemental light, an overhead HID lamp
that provides the industry standard and overhead LED arrays that provide three
different ratios of red to blue light.
“The propagation experiment is repeated for three weeks
every month,” Mitchell said. “We are measuring the differences in plant growth
from one month to the next. As we enter spring, the ambient light levels are
increasing. Gomez will measure the daily light integral (DLI) that is occurring
and the different red/blue ratios and what the plants prefer and determine what
they need. In addition to the plant metrics being collected, we are also
measuring the amount of electricity used for supplemental lighting.”
After the tomato seedlings reach the stage at which they
would be grafted onto the rootstock, data is being collected including plant
dry weight, height, stem diameter, leaf span and leaf area.
Mitchell said the propagation area that is equipped with
the lights receives 5 moles per square meter per day of supplemental light in
addition to the natural solar daily light integral that varies throughout the
year.
“Since we have only done the experiment a couple of times
so far this year, we’ve yet to see what kind of plant response pattern emerges,”
he said. The supplemental light we are providing now might not be enough light
during the dead of winter. Any benefits of supplemental light that occur during
the winter should disappear as the trials move later into spring. Once we have
obtained a full year profile of seedling response, we will be able to determine
the optimum amount of supplemental light to apply each month.
“One of the best management practices that we hope comes
of this long term study is to determine at what point it is important to use
supplemental lighting, as well as when it is no longer useful to do so.”
For the propagation study the tomato seedlings are
receiving supplemental light for 23 hours a day in order to achieve a daily
light integral of 5 moles per square meter per day.
Tomato seeds are being germinated in a substrate called
steadyGROWpro plugs. Six different tomato varieties are being tested: ‘Success’,
‘Komeett’, ‘Maxifort’, ‘Sheva-sheva’, ‘Liberty’ and ‘Felicity’. Seedlings of ‘Success’
and ‘Komeett’ are used for the production study after being grafted onto ‘Maxifort’.
These varieties were recommended by Marco de Bruin at Bushel Boy Farms in Owatonna, Minn., because they have
different growth habits.

Production trials
In the production experiments the grafted seedlings are
being transplanted into Coco Agro coir slabs.
“The lighting treatments containing both test cultivars
are blocked into separate half rows in order to determine if there are position
effects within the greenhouse that could affect yields,” Mitchell said.
The plants are being provided with supplemental light
twice a day. He said they are applying a daily light integral of 9 moles per
square meter per day.
“In early March we were lighting for 12 hours per day,”
Mitchell said. “Lighting usually starts well before sunrise and begins again
before the sun goes down.”
The first production study in 2012 began at the end of
January. Mitchell said the tomato plants that had received supplemental light
treatments were already setting fruit in early March.
“The control plants that didn’t receive any supplemental
light were way behind,” he said. “They were barely setting fruit. That’s what
you would expect in a cloudy region like Indiana.”
The first production experiment of 2012 will be
terminated after six months and a second will begin immediately. Mitchell said
the second experiment will be the exact opposite of the first in terms of solar
daily light integral changes.
“We want to see what challenges there are both with the
propagation and the production starting in the summer and going into the winter,”
he said. “If production is started in the greenhouse in July, the plants are
going to be receiving a lot of sunlight. As the photoperiod starts to shorten going
into fall that is when supplemental lighting will be more valuable.
“We are hoping to come up with recommendations for
growers in this region or in any other northern region that has cloudy weather regarding
when is the best time to start lighting their crops. We are also looking at
timing the production so that growers are not competing with home-grown or
field-grown tomatoes. That way the greenhouse growers are not competing with
availability and price for what’s being grown in backyards or in the field.”

Priming the ornamentals
propagation pump
Purdue horticulture professor
Roberto Lopez and graduate students Christopher Currey and Michael Ortiz are
studying the effect of supplemental light on the propagation of ornamental
vegetative cuttings and plugs.
“We’re looking at the top three
flowering crops that are produced from vegetative cuttings, which are
geraniums, petunias and New Guinea impatiens,” Lopez said. Currey and Ortiz are
comparing rooting, dry mass accumulation and other quality parameters under red
and blue LED lights to high pressure sodium lamps. Initial trials with cuttings
have shown that there are not a lot differences in terms of rooting time and
quality between the two light sources. Additionally, preliminary data is
showing no differences in the time to flower or quality of cuttings propagated
under the various LED lights and high pressure sodium lamps for the three
annual crops.
“Initially, the results
are very similar for
both rooted cuttings and finished plants,” Lopez said. “But this is very
preliminary. There were really no differences seen for these three crops. What
we were mainly trying to achieve was a certain daily light integral with both
the high pressure sodium and red and blue LEDs. With the additional trials that
we will be doing we will also be looking to quantify the amount of electricity
used by the high pressure sodium lights and the LEDs.”

Best timing,
amount of light
Lopez said none of the vegetative cuttings received
supplemental light during the first seven days of propagation because that is
when the cuttings are forming callus.
“A grower typically wouldn’t use lights during this
period unless the light level was really low,” he said. “During that period the
grower is trying to baby the cuttings to get them to form callus. If the light
level is too high during this period the cuttings could be stressed. After a
week the cuttings begin to form roots and start to photosynthesize. A grower
can maximize photosynthesis during rooting by increasing the daily light integral.”
Currey’s research and studies
Lopez performed at Michigan State University indicate growers should
provide a daily light integral of between 8-10 moles per square meter
per day to be able to increase rooting and the overall quality of the cutting.
Lopez and Ortiz are also
testing LED lights during plug propagation of celosia, cosmos, impatiens,
geranium, marigold, pansy and petunia.
“One of the biggest challenges with
plug production of annual bedding plants is keeping the plugs compact,” Ortiz
said. “Compact plugs ease transport in boxes and allow for a higher volume of
plugs to be transported at one time. This is definitely something to consider
as fuel prices continue to rise.
“Plugs are often grown in dense
288- or 504-cell trays that promote rapid stem elongation. We are using red and
far red LEDs in end-of-day treatments in an attempt to manipulate the
phytochrome-mediated genes that are responsible for stem elongation under dense
planting conditions. If LEDs can be used to control seedling height, the
industry can decrease its reliance on plant growth regulators.”
Lopez and Ortiz are also
investigating red and blue LEDs as a supplemental lighting source during winter
bedding plant plug production.
“The goal behind this
experiment is to quantify root development under different ratios of red and
blue LED light and high pressure sodium light,” Ortiz said. “We also are also
trying to determine if supplemental light from LEDs can offer more rapid root
development than light from high pressure sodium lamps. This can make a big
impact on energy use in the industry.”
Lopez said producing cuttings is much different than producing
plugs.
“With plugs a grower is starting out with plants that
have roots,” Lopez said. “A grower may end up being able to delay the sowing of
the plugs if he is using lights. We may find that the LEDs might prove to be
even more beneficial with plugs than with cuttings.”
For more: Cary Mitchell, Purdue
University, Department: Horticulture and Landscape Architecture, (765) 494-1347;
cmitchel@purdue.edu.
Roberto Lopez, Purdue University, Department of Horticulture
and Landscape Architecture, (765) 496-3425; rglopez@purdue.edu;
https://sharepoint.agriculture.purdue.edu/agriculture/flowers/default.aspx