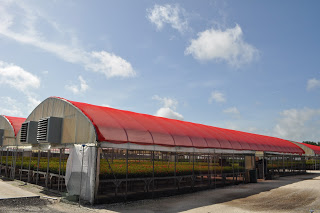 Florida producers adding structures and organic
production
By David Kuack
An increasing number of Florida fruit and vegetable producers
are looking at implementing some type of protected environment production.
University of Florida-IFAS associate professor Danielle Treadwell said producers
are looking at a variety of structures including greenhouses, high tunnels and
hoop houses. She said some producers are looking at taking a portion of their
field acreage and adding covered production.
The reason for adding the structures varies. Treadwell
said producers are looking to take advantage of new or expanding markets for
specialty crops. Other producers plan to extend the season for crops that can
be damaged by freezing temperatures. Some producers are looking for
opportunities to expand their product mix with organically-grown crops.
Treadwell said market demand is the most important driver
for the construction of greenhouses, but that water is also a key factor.
“When you start talking about high tunnels and hoop
houses, producers are looking for water savings through better freeze
protection,” Treadwell said. “When there is a freeze in Florida the protection
is coming from overhead irrigation. A single farm can use millions of gallons
of water per freeze event. Producers of high value crops like blueberries and
strawberries are exploring high tunnel production to moderate the temperatures
under these structures and to apply less water.
“Florida producers are seeing increased restrictions on
water use,” she said. “They want to be ready. There are 18 million people in
the state so there is a high demand for water.”

Increased interest
in organic production
Some of the producers who have used traditional methods
and inputs are looking at taking advantage of the increased demand for organic
products. Treadwell said some of these producers have customers asking for
these products while others are looking to diversify their product mix. She
said this has led to producers asking suppliers for organic fertilizers
specifically for their crops.
“There are more manufacturers that are developing organic
fertilizers,” Treadwell said. “Some companies that have historically served
conventional farmers are now expanding their offerings because their customers
are diversifying.”
Treadwell said those producers who have adopted biologically-based
management strategies such as biological pest controls should have an easier
time converting to an organic production system.
“Producers who grow fruits and vegetables organically are
using biological controls,” she said. “There are very few controls approved for
use with conventional pesticides and even less for growing organically. When
you have an organic system in the greenhouse you have to rely on biological
controls. If you have an established biological program in the greenhouse you
are good to go. Through the efforts of university
researchers (http://ocextension.ifas.ufl.edu/uf_workshop/pdffiles/Treadwell_Beyer_UFW222_2011.pdf)
and the producers we have done it and we have done it well here in Florida for
a number of years.”
Incorporating
organic fertilizers
Treadwell said producers seeking to implement organic
production and who already have a biological pest management system in place
should only have the fertilizer program to work out.
“How to keep the biology in the pot optimized so that
nutrients are transformed at a pace that the plants need–that’s the
challenge,” Treadwell said. “It’s finding that sweet spot of which fertilizer
to use, what analysis, and really honing down that application strategy.”
She said there are number of manufacturers that will
custom mix dry granular as well as soluble fertilizers that are compliant with
the USDA’s National Organic Standards.
“Producers can develop a relationship with a supplier
that does custom mixes and start experimenting to determine the best blend for
their crops. Then the next step is to put together a system of mixing tanks,
injectors and emitters that will deliver the fertilizer without clogging.”
Treadwell said it is best to mix the exact amount of
fertilizer solution that is needed. Holding the fertilizer solution at high
temperatures in the greenhouse can increase the rate of biological activity and
negatively impact the quality of the products.
A number of techniques have been tried at the university
to try to keep the fertilizer solution cool for a longer period of time. These
have included placing pop-up canopies over the tanks and injectors in the
greenhouses, wrapping the fertilizer tanks in reflective Mylar mulch and
submerging the fertilizer tanks in kiddy pools that contain recirculated well
water.
“Because the fertilizers used in organic systems are
plant- and animal-based nutrients with some minerals added in, these liquids
are suspended particulates in solution,” Treadwell said. “It’s not like
ammonium nitrate, which is a salt with ions that truly dissolve in water.”
Finding injectors that can handle the particulates in organic
solutions can be an issue.
“The injectors do clog,” Treadwell said. “It’s also very
easy for algae to grow so it’s really important to flush the injectors well
after applying the fertilizer solution.”
She said high greenhouse temperatures can also take a
toll on fertilizer injectors.
Organic fertilizer
factors
Treadwell said because most organic fertilizers are complexes
of multiple ingredients, the availability of individual ingredients may occur
at different rates. For this reason, she said, producers need to pay attention
to electrical conductivity levels during the season to have a better
understanding of release rates.
Even with the potential for excessively high or low soluble
salts, Treadwell said a limiting factor for certified organic fertilizers can
be the amount of nitrogen they contain.
“In compliant organic fertilizers the highest nitrogen
analysis available for dry granular fertilizers is around 15 percent,” she
said. “For solutions, the highest nitrogen analysis is around 5 percent. If
it’s greater than 15 or 5 percent, producers need to be sure that the
fertilizer is USDA compliant before they use it. That means a producer has to
apply quite a large volume of fertilizer in order to sustain the rapid growth
of the plants in a greenhouse because the temperatures are hot and the plants
are growing fast. It can be a little tricky, but it can be done. It just
requires a lot of management.”
Treadwell said using a combination of organic granular
and liquid fertilizers is helpful.
“It’s helpful to have a steady supply of nutrients in the
growing media using the granular forms and then supplementing with the liquid
form periodically through the season depending on the plants’ needs,” she said.

For more:
Danielle Treadwell, University of Florida, Department of Horticultural Sciences, (352) 273-4775; ddtreadw@ufl.edu.
David Kuack is a freelance
technical writer in Fort Worth, Texas, dkuack@gmail.com.
Organic Fertilizers use in strawberries (Spanish).

The University of Florida has produced a series of online
educational videos called Virtual Field
Day (http://vfd.ifas.ufl.edu/). The videos present information on a variety
of topics (hydroponic production systems, soilless media, nutrient solution
delivery, pest management, harvesting and marketing) with visual support
including instructional how-tos. One of videos was made by associate professor
Danielle Treadwell who discusses the use
of organic fertilizers (http://virtualfieldday.ifas.ufl.edu/gainesville/organic_produce/selecting_fertility_media.shtml)
in greenhouse vegetable production.Visit our corporate website at https://hortamericas.com