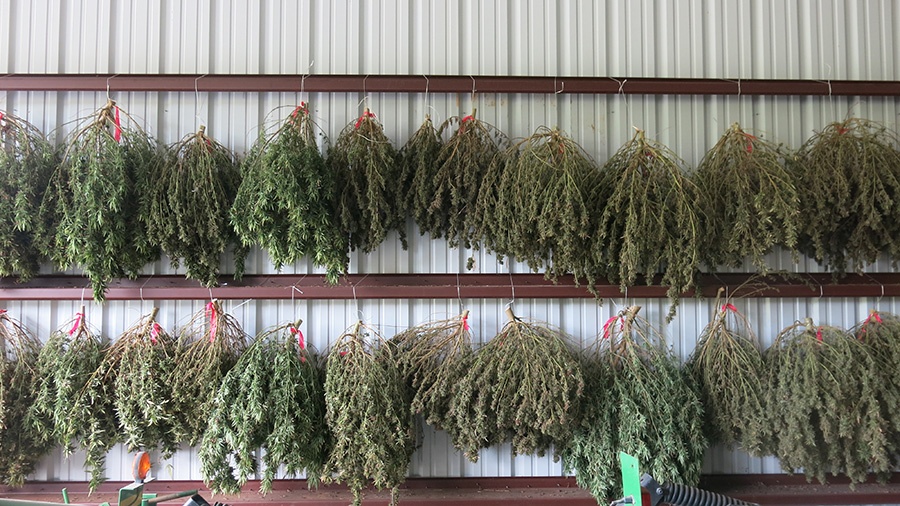 With the passage of the 2018 farm bill and the designation of hemp as a legal agricultural crop, growers are weighing their options on how to produce, process and market it.

The 2018 farm bill has removed industrial hemp (Cannabis sativa subsp. sativa) from the list of federally controlled substances. The farm bill defines hemp as “any part of that plant, including the seeds thereof and all derivatives, extracts, cannabinoids, isomers, acids, salts, and salts of isomers, whether growing or not, with a delta-9 tetrahydrocannabinol (THC) concentration of not more than 0.3 percent on a dry weight basis.” Hemp and marijuana (C. sativa subsp. indica) are the same plant species. However, marijuana has higher levels of THC, often above 10 percent. It is the THC that produces a narcotic effect.

The farm bill designates that “state governments continue to exercise jurisdiction over hemp, and the federal Food and Drug Administration (FDA) continues its jurisdiction over ingestible and body care products.” Hemp can be used to produce a variety of products including fiber for textiles, insulation, biodegradable plastics, food and feed. The higher level of cannabidiol (CBD), a non-intoxicating compound produced by hemp that can be extracted as oil seems to be the product that has the greatest potential. The oil is being used in a variety of ingestible and body care products.

Over 40 states have legalized and implemented hemp production programs. North Carolina’s pilot program for producing hemp was approved in 2017 when the North Carolina Industrial Hemp Commission was set up.

“Initially it was thought that most of the industry would grow hemp for grain and fiber, “said Jeanine Davis, associate professor and extension specialist at North Carolina State University. “The original research was set up to study grain and fiber hemp. But very quickly we saw that the interest was in producing the flowers for CBD hemp.

“The state program is going into its third year of production. There are now more than 750 licensed growers in North Carolina. The majority of those growers are in their first year of producing hemp. Most are growing for the CBD industry.

Davis said there are both greenhouse and field growers producing the crop. As of April the North Carolina Industrial Hemp Commission reported that the state had 9,121.4 licensed acres and 3,625,678 square feet of licensed greenhouse production. There are currently 474 registered processors in the state.

“The hemp industry has just exploded in North Carolina,” Davis said. “We are all trying to figure it out at this point. So much of the information about growing CBD hemp that has been available to us has come from growers in the western United States. Taking the production practices they use out West and trying to adapt them to hot, humid, wet North Carolina conditions has been a challenge. Last year it seemed like we were growing hemp in an aquaculture system because of the exceedingly wet weather.”

Grow how you know

Another challenge for the North Carolina growers has been adapting the equipment they have been using for other crops to produce hemp.

“What has been interesting to me as a scientist and an extension specialist is to see growers use the equipment they have available,” Davis said. “Some growers who are producing hemp outdoors are growing just like they would grow staked tomatoes or strawberries. They are growing hemp in raised beds with drip irrigation and plastic mulch. Other growers who are more used to growing agronomic crops are producing hemp more like those crops. They may be using raised rows that are closer together on bare ground and cultivated by machine.

“We can’t say which production method is best yet. This year I’m telling people to use the system that they are used to growing with. I’ve told them don’t try to learn how to grow a new crop with a new production system at the same time.”

Davis said during the first couple of years that North Carolina growers were producing hemp some were contacted by consultants from Colorado.

“These hemp experts came here trying to tell our growers the best ways to grow hemp and charged high fees as crop consultants,” she said. “I reminded growers there a very few similarities between trying to grow in Colorado and North Carolina. The soils and climates are very different. A lot of the things the consultants recommended didn’t work.

“There are some basic things that do translate between the two states. These could include the way to plant or having the machinery to harvest the plants or to strip the flowers or leaves from the stems. Things related to what’s the best production system, how to fertilize and irrigate and how to dry the harvested plants those are very different. Those are also the things that we are trying to work out. We are trying to use the experience we have for growing tobacco and medical herbs to help figure out the best way to produce and harvest hemp.”

Davis said because the industry is so new the market for CBD hemp is going in multiple directions.

“There are many processors that have already set up here in North Carolina,” she said. “Some are fairly large operations and were developed with some investment dollars so that they can handle some volume of plant material, but a lot of small operations have also been set up.

Davis said growers and processors who are producing on a much larger scale often have to ship their plant material somewhere else to be processed, including Florida and Kentucky. Some product is being shipped as far as Colorado.

“One of my big questions is what is the bottom line going to be for the growers?” Davis said. “How much can a grower put into the production and shipping of this crop and still make a profit? We have an economist working on that, but we don’t have the answers yet.

“I don’t put a lot of stock in the high profit numbers being thrown around yet because whenever growers start something new they’re not going to be as efficient as they will be a few years into the process. Growers are smart. They will find a way to make production more efficient. These early years there is a lot of hand labor going into the crops both in the production of the clones or transplants, the planting, tending the plants, harvesting and processing.”

Chris Higgins, general manager at Hort Americas, said his company can play a vital role in helping growers move into this new crop.

“If CBD is going to be used in products consumed by humans, then responsible growers are going to want to ensure that there is a good production management strategy and quality control program in place,” Higgins said.

“Like with any a new crop, growers are going to quickly uncover large scale cultivation challenges and then decide what controls need to be put in place to achieve target yields.

“Growers are already discovering the benefits that greenhouse and controlled environment production (no different than other crops) offers. Better control over environmental factors will have an impact on propagation, on plant morphology and on production of target compounds within the plants.”

Higgins said he already sees quite a bit of controlled environment hemp production.

“This includes young plant propagation and production, high value CBD production as well as other strategies and technologies to improve the efficient and profitable production without the use of pesticides,” he said. “Hort Americas’ role in the industry is to provide high quality inputs and reliable cost effective technology that helps growers produce the highest quality yields. That is a reason why growers are producing leafy greens in greenhouses and vertical farms or strawberries on ‘table tops.’ There is a desire to produce faster, more efficiently, with higher yields, premium quality and year round. For Hort Americas there is no difference in how these crops are viewed. Just like other controlled environment crops, Hort Americas is going to work with hemp growers to develop production systems that enable them to produce high-quality, high-yielding plants year-round.”