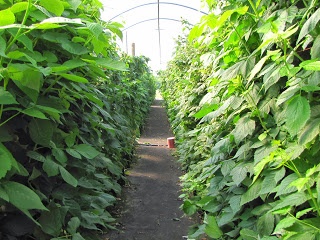 Research at Michigan State University has shown that high tunnels can extend the season, increase yields and reduce the disease losses of berry crops.

Michigan State University professor and extension specialist Eric Hanson has seen the benefits of growing raspberries in high tunnels. He has been studying the use of high tunnels with berry crops for seven years.

“The three big reasons for looking at high tunnels and berry
production are extending the season, reducing fungal diseases and increasing
yields,” Hanson said. “For commercial growers the production would be extended
into the fall with primocane (fall-bearing) raspberries when other growers
don’t have berries. The yield increase is usually two-fold over field
production.”

Hanson said the increase in yield is a combination of the better control of the environment in high tunnels along with reducing pest and disease problems.
“With primocane fruiting raspberries, the longer they fruit into the fall the higher the yields are,” he said. “Growers who are doing field production might be done harvesting in the middle of October, but they might be able to pick until early November in a tunnel. There is also a small increase in the average size of the berries in a tunnel over field conditions. Then there is a reduction in some berries that growers would probably lose due to insects and fungal infection in the field that growers are able to pick and sell.”
Hanson said the normal production cycle for high tunnel raspberries is to grow them in the ground.

“If a grower is doing a good job raising the plants in
high tunnels, he would usually get six years or more from a planting,” he said.
“The plants peak in production in the second year and the third and fourth
years are generally good. Then there can be a general decline due to a number
of factors.”

Hanson said the primary reason that a grower would remove raspberry plants is soil-borne diseases such as Phytophthora root rot and Verticillium wilt.
“The sites that we have been using for in-ground plantings are very sandy and well-drained, so we haven’t had any problems with disease,” he said. “We haven’t had enough long-term experience with high tunnels under Michigan conditions so we don’t know yet how long the plants can be maintained.”
Container culture

Hanson said that berry growers in Europe who are growing in high tunnels have been using substrate culture or container culture.

“The primary driver for using containers is that the tunnels are in a fixed place and it is hard to move them,” he said. “If the soil becomes contaminated with a pathogen the growers go to a substrate culture to avoid contact with the soil.
“We have started doing some research growing raspberries in 3-gallon plastic bag pots. The yields have been as good as or a bit better than the field-grown raspberries. If a grower has disease problems or has a heavy soil that just isn’t suited for raspberries, then growing in containers might be a good alternative.”
Hanson said one drawback to using containers is the increase in costs.
“Growing the plants in containers involves the use of an intricate irrigation system that requires management and maintenance,” he said. “A grower needs to make sure that the irrigation timing is right on and that there are no broken emitters because the pots are relatively small and the plants are quite large. A day without water will cause a lot of damage. There is also quite a bit of work in terms of trellising to support the plants. That is another labor issue.”
A suitable growing mix

Hanson is using a mix of aged pine bark and peat moss for container production.

“We chose that mix because it is very porous and it provides quick drainage so it is helpful in preventing Phytophthora root rot,” he said. “At the same time, since the mix is very porous, it requires diligent watering to make sure the plants don’t dry out.”
Hanson said one of the issues growers are interested in when growing in containers is the sustainability of the media.
“We’re more interested in things that are renewable and using components that are available locally,” he said. “Bark is something that is renewable and locally available. Bark could be a major component in combination with small amounts of compost that can be produced locally.”
Improving harvests

Hanson said one of the concerns with using high tunnels is erecting them too early in the season.

“With high tunnels, Michigan growers are limited by not covering them so early that they get caught with a 6-inch wet snow that collapses the structures,” he said. “A conservative-minded Michigan grower would cover these structures in early to mid-April. That could provide some advantage by advancing the crop about two weeks earlier than a field-grown crop. With the high tunnels a grower could be picking raspberries two weeks earlier than a field crop grower.
“The varieties vary when they start to fruit, but on average with the primocane types grown in the field, picking might start in the second or third week of August. With the high tunnel that could move the picking back to the first week of August. That would depend on the variety, location and when the structures are covered. Most growers produce different varieties so that they will have a consistent supply of fruit throughout the season.”
While only a small number of Michigan growers are currently producing raspberries in high tunnels, Hanson said some growers see the potential benefits of using the structures throughout the harvest season.

“A key time to have raspberries covered is during fruit
development and harvest,” he said. “An alternative approach might be to use mobile
high tunnels to protect the berries during this key time. The structures would
be put on rails so that they could be moved up and down the fields. The high
tunnels would be used over summer-bearing raspberries in July to protect that
crop and then moved down the row to protect primocane raspberries later in the
season. The use of the mobile high tunnels to protect the crop is more weather-related,
keeping the rain off of the berries to prevent disease.”

Hanson said the ideal temperature regime for raspberries in the summer is 65ºF in the morning with the temperature rising to 75ºF as the high during the day.

“In the high tunnels the temperature is nearly always higher than the ambient temperature,” he said. “So if it’s 90ºF outside, it might get up to 100ºF inside the tunnel. Trying to keep the temperature down is one issue.
“The plastic on the high tunnels that we have used reduces temperatures by screening out infrared light and providing some shading. Initially the light level may start out at 80 percent full sun. As the plastic ages, if it is used for several years, it becomes cloudier and dirtier and provides more shade. So in a high tunnel the plants are being grown in a shaded environment.”
The Haygrove high tunnels that Hanson is using are interconnected with multiple bays. He said the tunnels can be ventilated during the summer by opening the end walls.
“The plastic on the hoops can also be pushed up manually so that there is a little more ventilation on the sides,” he said. “Even so, it is nearly always hotter in the tunnels than the outside air. The raspberry plants would likely benefit from techniques that reduce temperatures on hot summer days.”
Retractable roof considerations

Hanson has started looking at the production of raspberries in a Cravo retractable roof greenhouse.

“We have been growing the raspberries in a retractable roof structure this past year,” he said. “We had a few extra potted plants from another experiment so we put some inside the structure. The plants in the greenhouse produced more berries, but so do plants in tunnels. So whether or not the retractable roof structure is better than a less expensive tunnel is a question we haven’t answered yet.
“We’re trying to determine if it would make economic sense for a grower to use this type of structure. A retractable roof greenhouse would add another level of expense. But it also provides another level of environmental manipulation. In the covered high tunnels we can ventilate them somewhat, but not real well.”

Hanson said another advantage of the retractable roof
greenhouse is that a grower would shade the plants only when he wants to shade
them.

“In a retractable roof structure a grower can open the roof early in the morning or later in the day depending on the temperatures to make sure the plants receive the optimum light levels. That can’t be done with the high tunnel.”
Hanson said the retractable roof greenhouse also offers more seasonal flexibility in regards to opening and closing the roof.
“A grower can manage the structure earlier in the spring because he has the potential to simply retract the roof if snow is forecast,” he said. “With the high tunnels it takes a number of days to put the plastic on. It’s not something that you can put on and pull off on a day’s notice.
Pest slows high tunnel adaption

Hanson said a recent major glitch in the use of high tunnels for berry crops has been the introduction of a new pest called the spotted wing drosophila (Drosophila suzukii).

“This little fruit fly infests all soft fruits, including raspberries, strawberries, blueberries and cherries,” he said. “It is particularly bad late in the year and is very difficult to control. If it infests the fruit there is the potential problem for it to infest the fruit when it’s marketed. We would probably see more people interested in using high tunnels for berry production if it wasn’t for this pest.”

Hanson said exclusion netting is being evaluated in some
areas as a means of managing this pest and that high tunnels can be used to
support the netting.

“One of the issues is the small size of the fruit fly,” he said. “Very fine netting is required to exclude the fly. Using the netting on a high tunnel can limit ventilation. A high tunnel with plastic on it along with the exclusion netting could result in even warmer temperatures in the tunnel.”
Hanson said a potential advantage of using retractable roof structures in deterring the fruit fly is the height of their sidewalls.
“The structure manufacturers said the roof could be left open at different times during the growing season, but the sidewalls could be closed,” he said. Since some of these structures have 18-foot tall sidewalls, it would be difficult for this fly, which is not a real strong flyer to get through the roof. The walls might do a good job of excluding the fly even if the roof was open.”
Hanson said the use of structures for berry production may become even more important since the number of pesticides labeled for the fly is very limited.
“There are seasonal limitations on how much of a certain pesticide can be applied,” he said. “If the number of applications can be reduced by growing in the tunnels or a greenhouse, then that would be a huge improvement. A grower probably wouldn’t be able to keep the fly out of the structure entirely and would have to treat for them, but he likely wouldn’t have to treat as often as a field grower.

David Kuack is a freelance technical writer in Fort
Worth, Texas, dkuack@gmail.com.