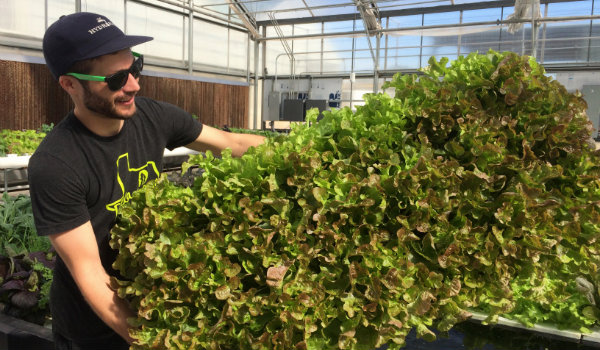 When it comes to changing from conventional to organic hydroponic production methods, there are three main areas that growers find most challenging.

“We’re doing the research because of market demand,” he said. “A lot of growers are getting feedback from their customers that they would prefer to have produce that is certified organic. Produce suppliers and brokers hear from the grocery stores and then they bring those requests to the growers.

“We don’t necessarily believe that produce grown with organic production methods is superior. We believe in conventional production methods as well. What we are trying to do is provide as many options to our customers as possible.”

Baras said an advantage of traditional fertilizers is all of the research that has been conducted on them has enabled growers to target exact nutrient profiles for specific crops.

“Research has enabled traditional fertilizers to come down to fairly exact levels,” he said. “Growers are able to figure out exactly how many parts per million of each nutrient they want to put into nutrient solutions. The chemistry allows them to be that exact.

“Organic fertilizers are a little trickier because there isn’t the precision targeting each nutrient. Generally there are inputs that are going to have several nutrients in them. Growers don’t have the ability to adjust individual nutrients as easily.”

“We currently don’t have any trials going with microgreens, but some of our first trials were with microgreens under LED lights using organic substrates and organic fertilizers. We definitely proved that is a viable production system.”

“The key is the slow development of the fertilizer tank,” he said. “Some growers have immediately added the organic fertilizer to their reservoir at full strength and they quickly notice that their tank starts to foam at the top and starts to smell similar to what happens with animal-based organic fertilizers. We’ve found if an initial charge, about half the target rate, is added first, along with a microbial inoculant at the same time, these issues can be avoided. We are using Terra Bella as the microbial inoculant because it has an extensive profile of different microbes.”

Baras said the half rate of fertilizer and microbial inoculant are run through the system for about two weeks.

“Once the microbial population becomes established, the nutrient solution in the tank can be brought up to full strength without any foaming or odors,” he said.

Baras said one of the major issues with the organic nutrient solution during the first two weeks is pH swings.

“The pH of the nutrient solution on the first day the organic fertilizer is added to the tank is in a good range around 6-6.5,” he said. “Within a couple days of adding the fertilizer, the nutrient solution pH shoots up to around 8.0. There are a lot of plants that do not like a high pH. Iron-inefficient crops like basil have a hard time taking up iron at a high pH. There will be a lot of chlorosis at the top of the plants. This happens within a couple days of the pH going above 7.

“The inputs to adjust the pH are very limited. The main downfall with citric acid is that it is anti-microbial. So although a grower is able to lower the pH, it’s not good for the microbial population. Another option is vinegar, but most commercial growers are using citric acid for controlling pH for organic production.”

Baras said the options for raising the pH are also limited.

Baras said another issue with using citric acid and sodium bicarbonate for pH management is the longevity of the nutrient tank solution is shortened.

“It could be a couple months, but at some point the sodium levels are so high that either the whole solution or part of the solution is going to have to be dumped,” he said. “The tank is going to have to be flushed. The amount of citric acid and sodium bicarbonate added can be done in small increments, but it is the accumulation that causes problems.”

Baras said once the nutrient solution stabilizes, the swings in pH won’t be as drastic when additional water and fertilizer are added to the tank.

“Depending on the water source, adding water to the tank can sometimes raise the pH,” Baras said. “Also, the Pre-Empt fertilizer is somewhat acidic and that could be used to lower the pH simply by adding more fertilizer.”

Baras said growers who switch to organic production systems should continue to measure the electrical conductivity (EC) of the nutrient solution to determine soluble salts levels.

“A lot of the nutrients in organic fertilizers won’t register on EC readings because of the forms they are in,” he said. “They aren’t yet broken down into simple salts. If growers are basing their feedings solely on EC readings, the EC of the nutrient solution will probably read much lower even when sufficient nutrients are being provided to the crop.

Baras said plants are fairly flexible on many of the nutrients, which can be maintained within a fairly wide range.

“With organics, sometimes the calcium level may only be 100 parts per million where with conventional fertilizers the target calcium level for most leafy greens is around 200 ppm,” he said. “But even at 100 ppm calcium with an organic fertilizer, we are not seeing the issues that we would expect from having a low calcium level.”

Baras said for fruiting crops like tomatoes, calcium can be an issue with organic production.

“In our research greenhouse the source water contains 30 ppm magnesium and 30 ppm calcium. Those can make a fairly significant contribution to the nutrient solution, especially with calcium that isn’t taken up as quickly as other nutrients. Over time the calcium level accumulates in the fertilizer tank. As the organic nutrient solution is used over several months, the calcium level rises and nearly reaches the conventional target of 200 ppm calcium. Like calcium, magnesium generally rises over time with source water contributions.”

Baras said that he uses an EC meter to get an estimate of the soluble salts level in the organic nutrient solution.

“For lettuce the EC of the nutrient solution in the greenhouse for conventional production is usually run at 2-2.3,” he said. “For organic lettuce production I typically run an EC between 1.2-1.6. I make sure that the crop has the nutrients close to the target range by sending water samples to a testing lab to get an exact analysis. But even that has some issues with organic production.

“I’ve found that the amount of time a nutrient solution sample sits after it is sent out can affect the nutrient analysis from the lab. Since nutrient solution microbes are constantly active, changes can occur within the sample. Initially a sample sent to a lab may have 100 ppm nitrogen. But a few days later the same sample may indicate there is 150 ppm nitrogen.”

Baras has sent the same samples to multiple labs and he has received analyses with significant variations, especially with nitrogen. He suggests growers stick with one lab.

“If there is a lab that is relatively close to a grower’s operation, this can help ensure that results are returned relatively quickly,” he said. “The best practice is for growers to create their own archive of the nutrient analyses so that they can compare test results to previous notes. Lab test results are likely mimicking what is happening in the nutrient solution tank. The microbes’ activities are also affected by temperature the solution is stored at as well. The readings could come out higher or lower.

“There are different factors that can affect the EC including the temperature and the crop stage when a water sample is taken. Crop age, whether plants are young or mature, whether there is a well-developed root system along with the crop itself, impact the interaction with the nutrient solution. These can affect the form the nutrients are in and how that would read out on a nutrient analysis.”