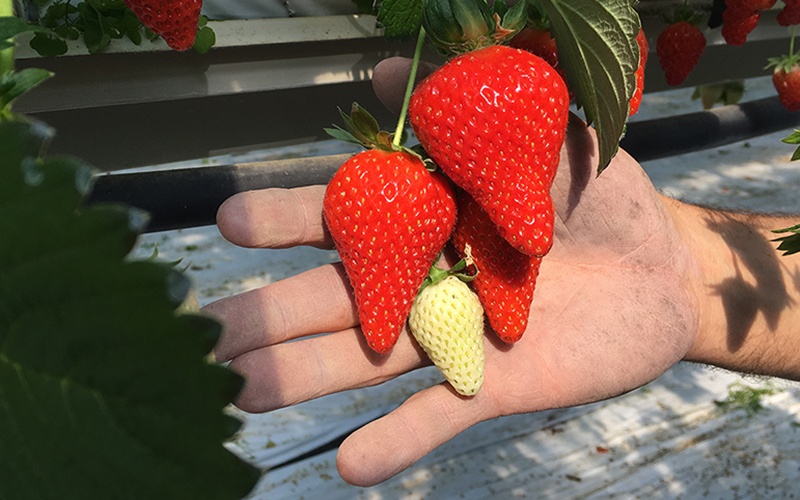 Sudlac’s initial experiments appear to demonstrate the benefits of applying Transpar ahead of the strawberry season in order to optimise PAR light while reducing infra-red.

“Traditionally, strawberry growers use a regular white shading product to protect their crops from heat and excessive natural light,” explained Frédéric Robert, Business Engineer at Sudlac. “But an initial trial appears to show the benefit of applying Transpar ahead of the season to optimise PAR light while reducing excessive heat, and then applying a white shading product later on in the season.”

In 2019 in Lot-et-Garonne, France, a trial was run on two 8-meter-wide sections of five plastic multi-span greenhouses (3500 m²), under which the Murano variety was being grown. On one section, Transpar 200 kg/ha was applied on 14 April, followed by a coat of Eclipse LD 100 kg/ha on 25 June. A traditional white shading agent was applied to the other section on 21 May. The health and physiological condition of the plants was monitored throughout the season. “The plants in one of the sections had different origins than the ones in the other,” said Jean-Jacques Pommier, the strawberry consultant who carried out the monitoring. “What’s more, we couldn’t use the climatic data from the greenhouse because sensors didn’t work properly. Nevertheless, the trends that we have seen so far are encouraging”.

Throughout the summer period, thrip populations were lower under Transpar + Eclipse LD than under the control coating, which can be explained by a warmer and drier microclimate, which is less favorable to thrips, and higher UV filtration. The conditions were also healthier with regard to aphids. Whereas large outbreaks of Rhodobium on scapes (> 20/scape) were detected in the control group on 12 August, this was not the case under Transpar + Eclipse LD. “The difference could be explained by a stronger presence of auxiliaries under Transpar + Eclipse LD a month earlier, following the period of heatwaves in late June and early July”, said Jean-Jacques Pommier. “All this in conjunction with higher humidity and limited maximum temperatures creates conditions more favorable to the auxiliaries.” Furthermore, the control group was attacked first by mites, a sign of a hotter and drier area.

As for botrytis, which was mainly present during the assessment conducted on 19 June (hot and humid period), it was less prevalent in the Transpar + Eclipse LD part (8% of fruit attacked compared to 16% in the control group). A positive physiological effect was also observed in the Transpar + Eclipse LD group, with the plants showing greater vegetative development, more regular flowering and fruit setting, fewer deformed fruits, a slightly larger fruit size and finally a 5% gain in commercial productivity (10.8 kg/m² as opposed to 10.3 kg/m²) over the period monitored. “Even if we cannot draw any firm conclusions from this trial alone, the trends are promising”, explained Jean-Jacques Pommier, Specifically, the application of Transpar ahead of the season appears to be a key factor in limiting the numbers of the main strawberry pests, especially thrips, in improving the establishment of auxiliary fauna, and therefore reducing the use of phytosanitary products. “Another trial on an early variety of strawberries (Gariguette) is being conducted in 2020, which should confirm these results”.

Compared to traditional shading, the application of Transpar + Eclipse LD resulted in a surge of 5 t/ha of strawberries sold, representing a significant increase of € 15,000 per ha in pre-tax turnover at a selling price of € 3 kg excl. VAT. The main increase in production took place during the period from 1 August to 15 September. No difference in taste could be detected between the strawberries grown under the two systems. Another benefit is that it is a potential means of reducing the use of conventional phytosanitary products in favor of biocontrol, allowing growers implement value-adding initiatives such as “pesticide residue free” more easily.