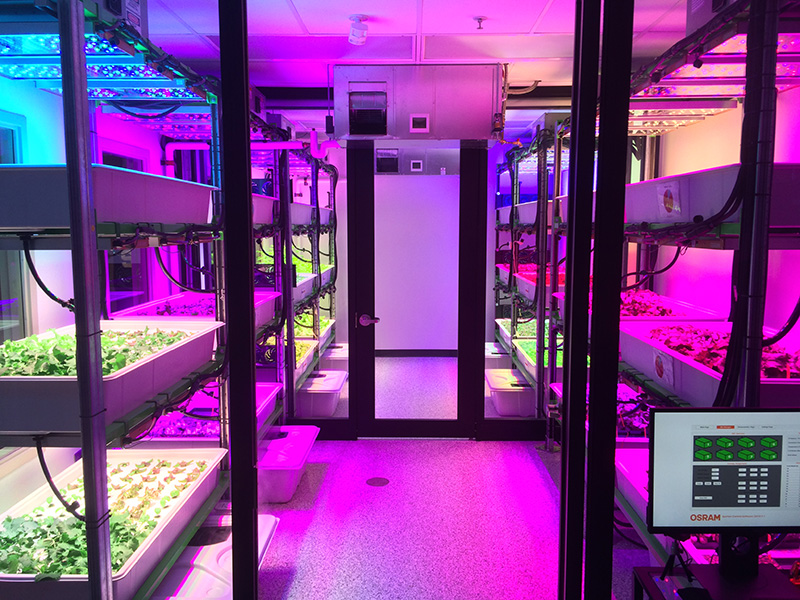 Michigan State University opened its Controlled-Environment Lighting Laboratory (CELL) in 2017. The 400-square-foot vertical farm research facility is being used to study the indoor production of high-value specialty crops, including edibles and ornamentals with LED grow lights.

“The two major crops that we are studying are leafy greens, including red and green leaf lettuce, and floriculture transplants, specifically seedlings,” said horticulture professor Erik Runkle. “We are fairly new to leafy greens. We started performing research with them about three years ago, whereas, we’ve been working with indoor lighting of floriculture plugs since 2011. What has been interesting is to compare and contrast responses among the different crops. Not surprisingly there are a lot more similarities than there are differences.”

The indoor lighting research being conducted in the lighting laboratory is only with LED grow lights. The LED fixtures that are being used were designed by OSRAM. A similar OSRAM LED product is now being marketed as Phytofy.

“The OSRAM fixtures we are using in our studies deliver seven different wavebands and each one can be independently controlled,” Runkle said. “We are using the OSRAM fixture in all of our indoor lighting studies. This fixture features a sophisticated lighting system that enables us to deliver an infinitesimal number of combinations of light intensities and different wavebands.

“Some of studies being conducted could relate to greenhouse production, but more often the research results we learn indoors won’t apply to greenhouses. In greenhouses we are supplementing sunlight. What we have found is the light spectrum has less of an effect in the greenhouse because there is all the background sunlight compared to indoor production. The ability to control these different growth and quality traits is significantly greater with indoor lighting than in a greenhouse.”

“Seedlings are typically grown economically in greenhouses,” he said. “To produce anything indoors is going to be more expensive. The challenge and the reason that we are looking at ornamentals in indoor production is that there is still a lot of seasonal variability.

“If there is a period of extended cloudiness or period of sunny weather that normally doesn’t occur, these unpredictable weather conditions can result in plants that finish too early or too late. Growing plants indoors takes a lot of those issues out of the picture because the environmental conditions can be completely controlled.”

Runkle said the research with leafy greens will look at the impact light can have on different attributes of the plants.

“With leafy greens, growers are more concerned with consumer preferences for flavor and texture, as well as the yield and the biomass of the plants,” he said. “In part, light can be used to manipulate these different attributes. With floriculture crops, growers are typically trying to produce a small, compact plant, and in some cases trying to develop flower buds early. In other cases, growers are trying to delay flowering.”

Runkle said with floriculture crops the focus is on flowering and the growth aspects for compactness.

Another area of research Runkle is interested in studying is to determine how light interacts with other environmental parameters, especially temperature.

“Right now we are focused on lighting and that is what a lot of my colleagues are doing as well,” he said. “But we also need to consider temperature effects on the growth rate of plants. By manipulating temperature and light we can probably reduce the production time even more than we have been able to achieve.”

The effects of different wavebands

Most of the LED grow light research that has been done with leafy greens has studied the effects of red and blue light.

“We have a fairly good understanding of the interaction between red and blue light and how that affects leafy greens,” Runkle said.

“The two wavebands for which much less information has been collected are green and far red. The most recent work that we have done is to look at both of these wavebands in independent experiments. Far red is a little more predictable and better known. We probably know the least amount about green light. Our group is focusing on some of these lesser used wavebands and trying to evaluate whether there is a fit, a need or a benefit to including them in a lighting fixture vs. sticking with a white light fixture or red/blue fixture.”

For the floriculture crops Runkle is studying, the focus is on collecting more details on the benefits of adding far red to the light spectrum.

“We know that there are benefits to far red, but how much far red needs to be delivered to get the positive benefits, which would be early flowering without the drawback of growth extension,” he said. “It’s really trying to dial in that waveband, particularly how much far red is needed.

“One of the things that we have learned is that inclusion or addition of far red light accelerates flowering of some long-day plants. What we are trying to determine is in which crops the far red promotion of flowering occurs and how much is needed to accelerate flowering. We’ve also been investigating how far red light interacts with other wavebands, particularly blue light, as well as how it interacts with total light intensity.”

One of the studies being done by Runkle’s research team is comparing the effects of different light spectrum wavebands to white light LEDs.

“Some white LED grow lights are relatively inexpensive,” he said. “We want to determine if there is a benefit to the customized spectrums, which would probably make them a more expensive product. Growers could decide whether to purchase fixtures with a fairly unique spectrum and receive their benefits.

“Is it worth the extra cost to get these benefits? We don’t have specific numbers now, but the goal is to be able to quantify different growth responses under different light treatments. Information from our research, as well as from others working in the area, could help growers choose between a general inexpensive LED grow light to produce moderately good plants or spend more on fixtures to produce plants that flower earlier or have some other attributes that are desirable.”

Runkle said some companies are manufacturing customizable fixtures for growers.

“The major downside of these customizable fixtures is that they are often times more expensive than fixtures with a fixed spectrum,” he said. “Then the question for the growers is whether having the ability to tailor or adjust the spectrum worth the added cost. That is a hard question to answer at this point. It’s going to be situational. I’ve seen general fixtures marketed for the lighting of plants. I haven’t seen fixtures marketed yet for specific crop types.”