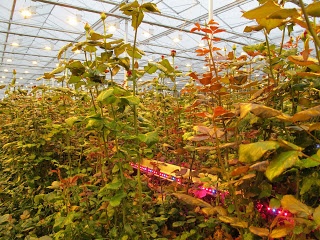 Development of testing guidelines will make it easier for light manufacturers and growers to compare LED systems.

Growers are always looking at new technology for growing their plants faster, better and cheaper. One of the relatively new technologies that is gaining interest among growers and researchers is light emitting diode (LED) lighting.
So far, much of the research that has been done on LED lighting for plant production has occurred in Europe and Japan. More recently an increasing number of researchers and growers in the United States have begun to look at what benefits the use of LED lighting may have on both vegetable and ornamental plants. This research is focusing on different phases of the production cycle, including seed germination, vegetative propagation, the impact on flowering and increased photosynthesis.
Much of the LED research in the United States is being conducted by plant scientists. One research project, which has received funding from USDA, is a cooperative effort between researchers at Purdue University, Michigan State University, University of Arizona and Rutgers University. While some of this project’s studies are examining plant growth and development, one part of the project is focused on developing best management practices and guidelines for testing and selecting LED lighting.

Measuring LED performance
A.J. Both, an agricultural engineer in Rutgers University’s Department of Environmental Sciences, said his part of the research project addresses the challenges that any grower or consumer encounters when they look at LED lighting.
“There are many companies with products on the market today and they all have claims about lifespan, light quality and benefits,” Both said. “It’s very difficult to verify these claims independently. So every manufacturer can pretty much claim what it wants. There is no real standard or baseline that we can relate these statements to and say this makes sense or no this is too outlandish to even consider.”
Both said he and the other project researchers thought it would be worthwhile to come up with a standardized approach or procedure to measure LED lighting systems for greenhouse applications.
“This would be an experimental setup in a controlled environment where measurements would be made of electricity consumption, light output, light intensity and light spectral qualities,” he said. “We would develop a testing procedure to compare manufacturers’ products. We would then come up with some guidelines that would be provided to the industry. This would then enable both manufacturers and greenhouse growers to make comparisons between the lighting systems that are available.”

Making light comparisons easier
Both said the testing design that he is developing will allow manufacturers and growers to bring in light systems on which specific tests can be conducted related to energy consumption and other performance parameters. The tests will enable Both to evaluate the entire product.
He said all of the project’s researchers are planning to do tests on some manufacturers’ lights.
“It’s not going to be feasible to test every single unit that is available,” he said. “We are not like “Consumer Reports” that can do testing on a large scale and publish a lot of data. We will be selective in the number of systems that we will evaluate. We probably won’t test more than a couple dozen lights per year. We’re not planning to be in the business of running a commercial testing lab.”
Both’s goal is to develop a testing bank or testing set up within the next year and to start some initial testing as soon as the components are available.
“We will trial a limited number of lamps because the tests will require some time and some consideration as to what environmental conditions we want to test the lights under and the type of measurements we need to take,” he said. “Initially it will take more time and then as we get used to the testing procedures it will go more quickly.
“The testing that will be done is mostly for our own understanding and the ultimate development of guidelines or standardized measurement procedures. The industry, both manufacturers and growers, can use these standards to verify claims independently. Providing a set of guidelines the industry can follow and base their claims on will make it easier for growers to compare the different systems available.”

Looking at other industries
Both said the project researchers are looking at the lighting industry to see if there have been other guidelines or procedures developed. He said standards are being used in the architectural lighting industry and these will be looked at to determine if they have application to the guidelines being developed for the greenhouse industry.
“Of course, we want to take a look to see how much of those other industries’ standards apply to this particular application and to determine what changes we may have to make to really make it worthwhile for our industry,” he said. “Because we are an independent entity in this whole testing process, whatever we develop is going to be scientifically sound,” he said. “Hopefully the testing process will convince the industry, particularly the manufacturers, to voluntarily adopt these guidelines in their design and manufacturing procedures. They can also be used as a marketing tool for the purpose of gaining the acceptance of growers.”

Combining research results
Both said that by combining the information he collects with the findings of the plant scientists he is working with should provide growers with specific crop information.
“Determining which LED lighting is best for a particular crop is part of what the other project researchers are doing,” he said. “They are looking at it more from a quality aspect. What light wavelengths to provide, where to locate the lights in the crop canopy, what duration, and things like that. I’m looking at it from the standpoint of what type of lights need to be evaluated to make it clear to growers what choices they have and what system might be better for them depending on their operation.”
Both said the researchers plan to trial some of the systems that have potential at several grower operations. He expects to be involved with the grower installations for testing purposes and will likely be taking some measurements at these locations.

A learning process
Both said the history of using LEDs is relatively short and the challenges and benefits associated with their use are not yet fully understood.
“It is going to take some time to figure out for a particular crop what are the benefits and challenges of using LED lighting for photoperiod control or for photosynthesis lighting,” he said. “To expect our four-year project to discover everything there is to know about LED lighting is not realistic. We are going to need a lot more time as a research community to investigate all the issues related to LED lighting before the implementation can be complete.”
For more: A.J. Both, Rutgers University, Department of Environmental Sciences, Bioresource Engineering, (732) 932-9534; both@aesop.rutgers.edu.
David Kuack is a freelance technical writer in Fort Worth, Texas, dkuack@gmail.com.