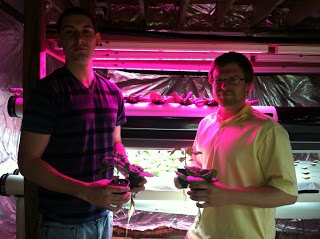 Bob McVey and Ed Olanowski, owners of Two Bros Hydro, are using LED and fluorescent lights, vertical farming and a new greenhouse to expand their vegetable and fruit production.

Two Bros Hydro in Milton, Del., is a young company looking to expand. Owners Bob McVey and Ed Olanowski started their company in August 2012, in the basement of Olanowski’s house. The two entrepreneurs set up
a nutrient-film technique (NFT) vertical farming system with four levels or tiers consisting of 4-inch PVC pipe. Each tier grows 100 heads of lettuce. They are currently using two tiers, one equipped with Philips GreenPower Production Module Deep Red/Blue 120 and the other equipped with Sylvania 32-watt T-8 Daylight 4-foot fluorescent lights.

The two have trialed different varieties of lettuce and have narrowed the selection down to eight varieties. These same varieties will be grown in a new greenhouse the two growers have built.
“The one restaurant we are selling to prefers mini-heads of lettuce,” Olanowski said. “We can produce the mini-heads in the basement in a relatively quick turnaround time.”
Expanding production

The two growers are using A-frame NFT systems in their new 600-square-foot greenhouse.

“The greenhouse is relatively small, but we will be doing
vertical growing in that structure too,” McVey said. “We can grow 200 plants in
one A-frame. “We are currently growing strawberries in one A-frame, including
the varieties Ozark Beauties, Sparkle Supreme and Winona Giant. We are also
planning to grow some herbs, including thyme and cilantro, and lettuce in an
A-frame.”

Other crops being grown in the greenhouse include raspberries, blueberries, several hot pepper varieties, bell peppers and three tomato varieties. Only the lettuce and herbs are being grown in the A-frames. The other crops will be produced in a recirculating deep water culture system. The two growers are also considering adding an aquaponics system in the greenhouse, which will include fish. They said the aquaponics system will enable them to grow as organically as possible in the NFT systems, as well as producing fish for future harvesting.

Olanoski said they will continue to grow the lettuce in the basement of his house.

“We will continue to grow the lettuce in the basement because we want to have that as a backup to what we produce in the greenhouse,” he said. “The LED lights we are using in the basement are inexpensive to
operate so it makes sense to keep that lettuce production going.”
With the increase in production, the two growers are also expanding their customer base. Much of the produce grown in the greenhouse and the basement will be sold at Dawn’s Country Market in Milton. They will also be
looking to expand their sales to local restaurants.
“Since we started growing in late summer last year, we need to find out what is going to be the demand during the summer,” McVey said. “The demand drops off during the winter. We kind of started doing this backwards. We began producing before we had built up our customer base.”
Sold on LEDs

“On every fluorescent tier there are four hoods, each containing four 32-watt bulbs for a total of 16 bulbs,” he said. “There are six LED modules installed on another level. Each LED strip is 35-watts. We’re running 210 watts on the LED level and we’re running 512 watts on the fluorescent level. That’s a significant difference in the amount of electricity used for the LEDs and the fluorescents. One LED module is only 3 watts more than one fluorescent bulb.
“The LEDs are producing so much more plant growth per level. If we decided to replace all of the fluorescent lamps in the system with LEDs, we know that we could maximize our yield potential.”
Overcoming production issues

Olanowski said that when they started growing the lettuce in the basement they began with an organic fertilizer.

“It had the consistency of watered-down molasses,” he said. “It certainly wasn’t suitable for a recirculating NFT system. Also, we were having pH problems. The pH seemed to be going up to 8.5-9 every other day.
“We heard that organic fertilizers can cause issues with recirculating systems. We switched over to Advanced Nutrients’ pH Perfect Plant Fertilizer. We have not had any pH or nutrient issues since making the switch.”
Another issue that the two growers had to resolve when they started using the LEDs in the tier system was related to the proximity of the lights to the plants.
“We initially put the LEDs too close to the plants and were seeing some tip burn,” McVey said. “The LEDs were 8 inches from the top of the plants and they were causing some burn. We needed to raise the modules up 4 inches so that they were a foot away from the plants.”
Olanowski and McVey also learned that even though they were using LEDs and fluorescent lights on only two of the four levels that adequate air circulation was critical.
“Initially, we were seeing a lot of tip burn,” McVey said. “This symptom wasn’t showing up until the plants were fairly mature. We thought we were having a problem with calcium deficiency. We added a couple 18-inch oscillating fans and once the air circulation was increased the problem cleared up.
“We don’t think tip burn will be an issue with the lettuce that is grown in the greenhouse. We looked at different ways to keep the greenhouse cool, but most of them are relatively expensive. We installed a 32-inch exhaust fan in the greenhouse and when that is turned on there is good air movement through the house. If air circulation does turn out to be a problem during the summer, then we can install horizontal airflow circulation fans.”