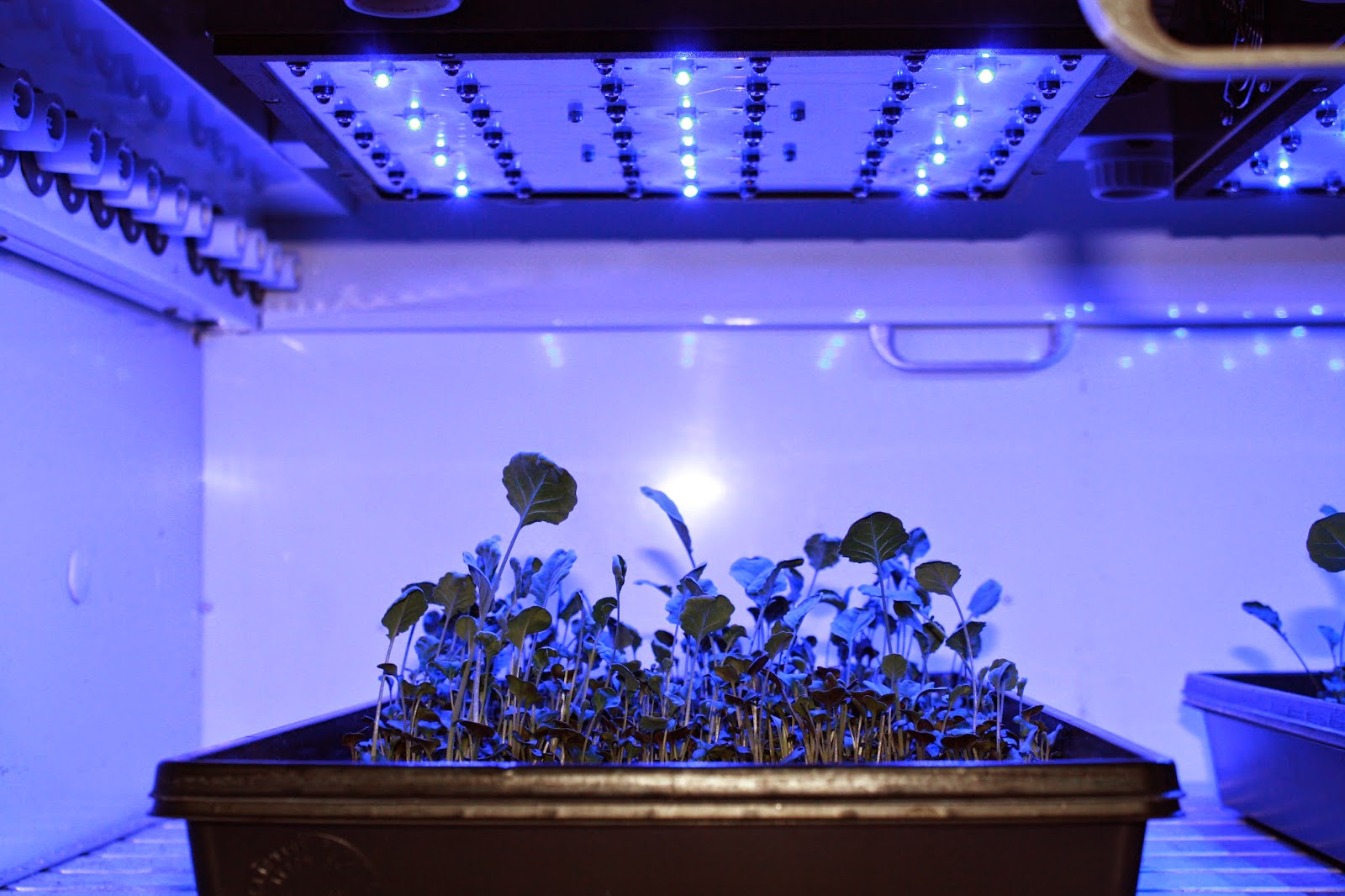 The use of LED grow lights to provide specific light wavelengths could allow growers to increase nutritional values of edible crops, enhance the intensity of foliage and flower color and improve the postharvest longevity of ornamental and edible crops.

Improvement in the light intensity delivered by light emitting diodes (LEDs) is helping to expand their use for the production of both edible and ornamental crops. Research with LEDs has been going on for about 30 years. Only within the last 10 years have increases in the light
intensities of LEDs allowed researchers to study the direct effects of narrow wave bands of light on plant physiology.

“LEDs are now available to deliver all blue, all red, all green, all yellow light or mixtures,” said University of Tennessee plant sciences professor Dean Kopsell. “White LEDs are almost a broad spectrum light source. White LEDs are actually mostly blue light with a little bit of red, yellow and green light with a white phosphor over them.”

Kopsell and his colleagues at the University of Tennessee are studying the impact individual types of light can have on the nutritional qualities of edible crops. Their work is focusing on crops that can be produced relatively quickly in 25-35 days, including microgreens and baby greens. They have also begun looking at some herbal crops including basil, tarragon and chives.

“Some of the unique things we are finding are when we change the light quality environment, going away from broad band light sources like fluorescent, incandescent and HIDs, and exposing plants to narrow band wavelengths of red and blue light, many things are changing in the plants. These narrow bands of light are having an effect on several plant quality parameters from a metabolic standpoint.”

University of Tennessee researchers have found that exposing plants to narrow wavelengths of the light spectrum has resulted in the increased production of antioxidants and anti-carcinogenic compounds within the plants.

“What is even more interesting is some of the primary metabolites like the mineral nutrients are also increasing,” Kopsell said. “We are shifting the light ratios and putting more blue light into the mix. Blue light is close to the ultraviolet (UV) range and has higher energy values than red light. Because of the higher energy level associated with blue light, the more blue light we are exposing the plants to, it seems the more significant the results are on nutritional values.

“We haven’t got hard data yet, but everything that we can see, smell and taste, these blue lights not only affect nutrient uptake, and anti-oxidant metabolism, but they also affect aromatic compounds and flavor compounds. They make them more intense.”

Although researchers have only recently begun to study the impact of narrow light wavelengths on plant physiology, Kopsell said this will be the major use of LEDs in future applications.

“Not only is a grower going to be able to select the type of light and intensity from the LED manufacturer, but eventually the grower will know when is the critical time to apply a specific amount of light to a crop. One of the things that we have seen with these short term crops is using the light as a finishing-off treatment. The crops are grown under regular light conditions like any grower would have the ability to do and then just before harvest the plants would receive a specific type of light for a certain period of time. This light treatment would stimulate the plant physiology uptake and metabolism right before the plants go to the retail market.”

“We increased the green pigments in the leaves so that they looked more vibrant,” he said. “Other research has shown that UV light increases the anthocyanin compounds in leaf lettuce. Providing a little UV light, which is blocked out in most greenhouse environments, at the right time, a grower can get a crop to color up quickly before the plants are shipped out. What we have done with leafy greens to intensify the color of the leaves can also be done with petal tissue. By changing the light quality a grower could get more vibrant flower colors.”

Kopsell said whether plants are grown outdoors, in a greenhouse or in a closed controlled environment with artificial light, the plants are using specific wavelengths from the available light source.

“Horticulture, floriculture and agronomic researchers know how much light is needed in order to produce crops with broad spectrum light,” he said. “The million dollar question that hasn’t been answered is how much light is needed from LEDs to achieve that same level of production? It is going to be less than the daily light integral (DLI) from a broad spectrum light source. But, right now we can’t tell you how much less it’s going to be.

“Applying specific light wavelengths when the plants need them, whether it’s for juvenile growth, flowering or fruiting, we don’t have a good grasp on the amount of light that the plants actually need. If a grower is only going to supply his plants with red and blue light, how much less light can a grower use in that production system?”
One of the reasons that plants will not require as much light from LEDs is because of the reduction in light stresses.

“Providing specific types of red and blue light, the amount of stress on plants is reduced because the plants don’t have to tolerate the light not being used for metabolism and physiology,” he said. “We have data that shows LEDs provide a less stressful light environment for plants. So we have to determine how much less light is needed. It is going to require an extra level of management to know what kind of light, how much light and when to apply it. Growers are going to be able to use LEDs to fine tune the light environment. It’s going to depend on the crop, how it’s being grown, where it’s being grown and how the crop will be used. Is it an ornamental, edible or medicinal crop? It’s not going to be as easy as sticking a seed or cutting into a substrate and letting Mother Nature take control. It’s really going to take some fine tune management. But the future looks bright so far.”

David Kuack is a freelance technical writer in Fort
Worth, Texas; dkuack@gmail.com.Visit our corporate website at https://hortamericas.com