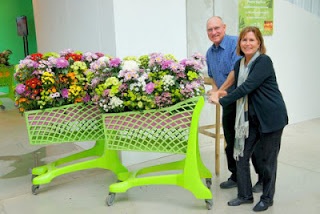 Florida industry leader and greenhouse grower Rick Brown visited Floriade in the Netherlands in search of plants that would survive for consumers under Florida’s weather extremes.

Rick Brown of Riverview Flower Farm in Seffner, Fla., sells Florida Friendly Plants. That may not sound unique or different, but Brown said the horticulture industry needs to do a better job at the regional level of testing, promoting and retailing plants that meet consumers’ expectations.
“One of the problems at retail is there are so many different annuals to choose from,” Brown said. “Every year there is a subtle change, a little difference. But does that change really matter in the long run to the Florida consumer who is coming in for a red flowering plant? In some cases it does, but too often we are selling consumers something that is guaranteed to fail.
“How many consumers buy a universal cook-book combination basket of annuals, take it home and hang it in the sun and watch it quickly decline? They become dissatisfied because they have to water it twice a day and some species in the combination melt quickly in the Florida heat. What they thought they were buying was a pretty flower with growth potential. Unfortunately we are selling failure over and over again.”
Brown said part of the problem is that retailers, whether large chains or independents, want to sell something new and different—the latest and greatest rather than the tried and true. Just like in other parts of the country, there are peak periods in Florida when consumers are coming into the garden centers.
“It is during those times that retailers are going to have all of that “different stuff”, including kangaroo paws, calla lilies and other flowering potted lilies in their stores,” he said. “And that is the time when we are starting to go into hot weather here in Florida. These plants aren’t going to survive for Florida consumers. A customer may take home a combination annual basket and in two days she’s wondering why she bought it.
“New lines of nationally marketed dwarf buddleia or butterfly bush grow to half the size of traditional varieties. The dwarf plants only survive half as long due to the pressures of rust, spider mites and nematodes, which is the reason these buddleia are non-existent in Florida landscapes.”

Looking for plants that survive
Brown visited Floriade for the first time in 1982. He hadn’t been back to the event in 30 years. Floriade is a horticultural exposition which is held in the Netherlands every 10 years. This year’s Floriade covers 163 acres and is open from April 5 through Oct. 7. It consists of gardens and pavilions including Villa Flora, the largest indoor flower exhibition in Europe.
One of the primary reasons that Brown went to this year’s Floriade was to look for new and different succulents. He has been growing succulents for six years.
“You’ve never seen all of the succulents,” he said. “There is always different ways of growing them to make them look different.”
Brown said succulents are good patio plants in Florida.
“They can sit outside and be neglected, exposed to a wide range of temperatures, light conditions and water conditions. They can take a lot of stress in Florida,” he said. “That’s why people like them so much and the sales are increasing. Succulents have always been available here, but the plants haven’t been promoted.”
Brown said another reason that succulent sales weren’t strong previously was because of their limited availability.
“Now we are offering the plants in more formats, including different sizes and different varieties, and making sure they are regularly available,” he said. “That’s what I was really looking for when I went to Floriade. I was pleasantly surprised by the displays they had there and picked up some ideas that we can possibly use here.”

Offering consumers options
Brown, who sells his products through Home Depot, offers succulent assortments of different species in a nine-count tray. He said the assortments, which can be transplanted into the consumer’s choice of containers, are doing very well. He is also offering sedum assortments in a nine-count tray that is also selling well.
A succulent product that Brown introduced last year is the Classic Living Walls™, which is a nine-count tray that can be hung.
“It’s nine 60-mm Elle pots that stay in their cells because they are rooted so well,” Brown said. “The tray has holes that enable the consumer to hang the plants on a wall. It’s the cheapest vertical garden a consumer can buy. It sells for $15 at retail. Other vertical gardens start at $150 per square foot plus the cost for maintenance. Consumers can hang our living wall on a fence or on the side of their house.
Brown said he built some frames that are used in the stores to show how to use the Classic Living Walls™.
“It kind of has a picture frame effect that is commonly used for living walls,” he said. “It’s part of our store display. We get asked for the frames occasionally, but not often enough to consider making the frames for sale.”
Brown said he isn’t currently looking to expand the living wall concept beyond succulents because many plants have limited application in this format.
“One problem with the living wall system is the plants still have to be watered,” he said. “With succulents, the tray can be taken down, the plants can be watered, and then the tray can be stuck back up. These plants are so forgiving. If other types of plants are used, it’s usually a short-lived event. Then there is maintenance too with other types of plants.”
Plants in the Classic Living Walls™ include different species of sedums, portulaca, senecios and kalanchoes.
“There is quite a selection of succulents that look good for quite a long time,” he said. “But it has been a learning experience over the years to come up with this collection of plants that work.”
Brown said he is looking for plants that have good shelf life in the stores and also good consumer performance.
“We are going back to plants that are easy to care for and last a long time,” he said. “I hear over and over again people tell me, “Those succulents I bought two years ago keep looking great and they multiply.” I rarely hear anyone say that they killed all of their succulents.”

Plants with potential
One plant that Brown saw at Floriade in several displays was rhipsalis or jungle cactus, which is an epiphytic plant.
“The plants looked really good in vertical gardens,” he said. We could start putting some of those in our assortments. And they looked really good in hanging baskets too.”
Another crop that Brown is excited about is the Garvinea line of perennial gerbera from Florist Holland BV. He started a relationship with the breeding company when he went to the Netherlands for the first time in 1982. He began growing gerbera in 1979 but had to discontinue their production because of the heavy disease and pest loads the plants encountered in Florida.
“We started out doing tissue-cultured plants, but they weren’t really adaptable for Florida landscapes,” Brown said. “They were short-lived because the leafminers, powdery mildew and other diseases would take them out. We could keep the plants growing outdoors as long as we kept spraying them for leafminers and diseases. But once the plants got into the homeowners’ hands, they couldn’t control the pests and diseases.”
Brown said the gerbera breeding 30 years later has addressed these problems. He said he has seen some trials with the Garvinea in Florida landscapes and the initial results have been good.
“I have seen the plants in California during multiple years in established plantings and they looked great,” he said.

Brown said that numerous kalanchoes were also displayed at Floriade.
“Kalanchoes live in Florida as a perennial,” he said. “I’m familiar with the different breeders and what is being developed among the kalanchoes.”
Euphorbia, including Euphorbia milii (crown of thorns), also does very well in Florida.
“I’m always looking for new euphorbia species,” he said. “I’m looking for new ideas on presentation and how to use them in combinations. I’m trying to make a better product to try and make a happier customer.”

David Kuack is a freelance technical writer in Fort Worth, Texas, dkuack@gmail.com.