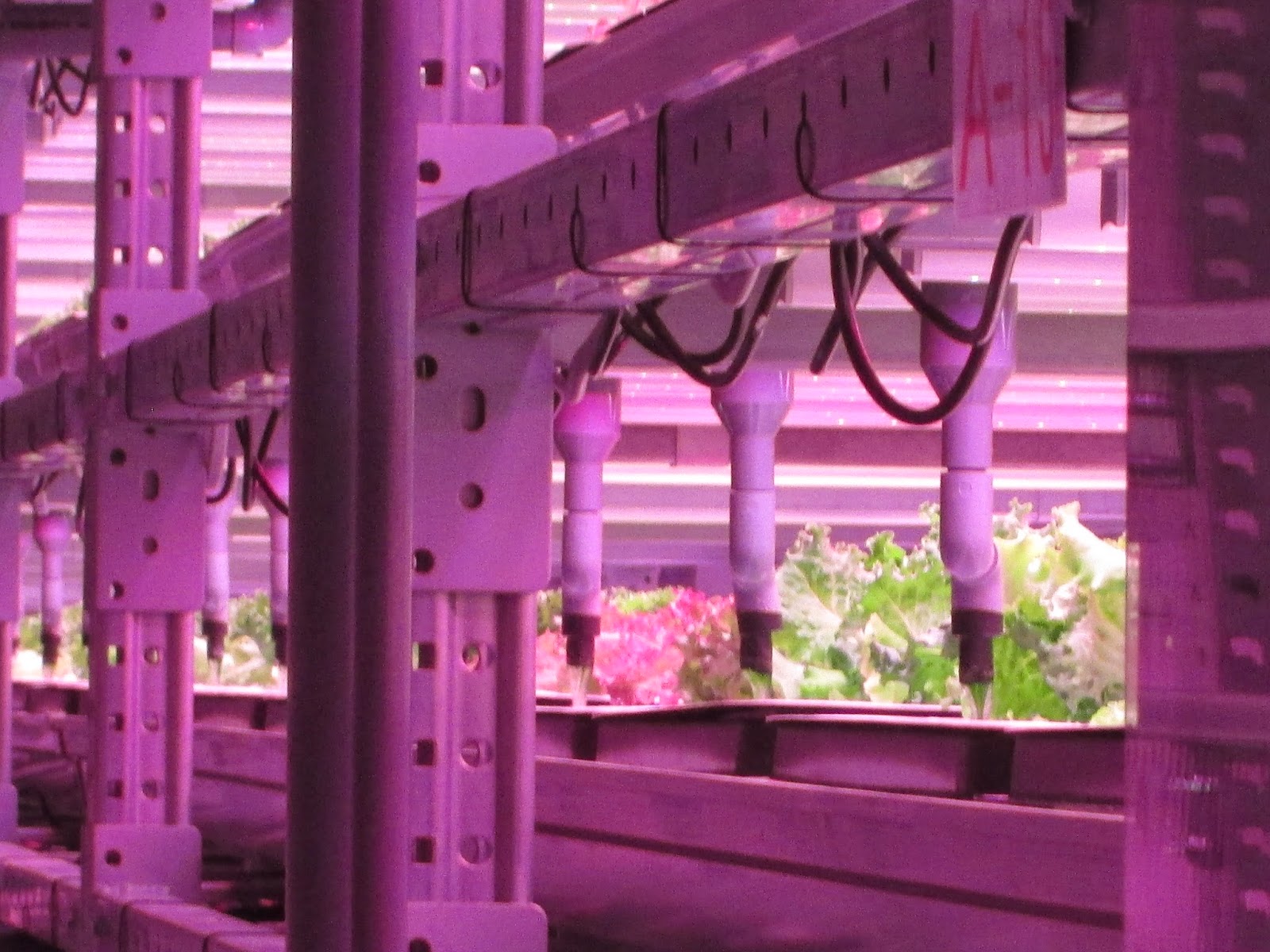 As technology improves, plant factories have the
potential to operate in the U.S. and Canada to produce crops that are difficult
to grow using current conventional methods.

By David Kuack
When you hear the term “plant factory” what picture comes
to mind? University of Florida professor and mechanical engineer John Schueller
said the traditional definition of a plant factory is a place in which there is
no natural light and artificial light is used to produce plants.
“I’m more of a traditionalist in that I feel a plant
factory is a place that has mainly or only artificial lights in order to grow
plants,” Schueller said. “But a greenhouse with multiple levels of plants in
which natural light is the dominant source and is supplemented with artificial
light, I would also consider that to be a plant factory.
“People involved in protected plant agriculture,
including greenhouses and indoor plant factories, are displaying a lot of
creativity. There are a lot of different systems being tried out. It’s
difficult to make a hard and fast definition of a plant factory. A traditional
greenhouse with plants on raised benches or growing on the floor is not usually
recognized as a plant factory.”
Plant factory
automation

Schueller, who spoke at the Plant Factory Conference in
Kyoto, Japan, in Nov. 2014, said the most important automation that occurs in a
plant factory is during the growth stage.

“The application of light and fertilizer is when the main
automation occurs,” he said. “There is automation during planting when a grower
is trying to establish the plants. And there is also automation during
harvesting.”
Schueller said during the Plant Factory Conference there
was a lot of discussion about which lights are the best for using in plant
factories.
“There are questions that still need to be answered about
what are the best wavelengths and what are the best cycles for different
crops,” he said “Even though there are a considerable number of plant
factories, we still don’t know what the optimal conditions are for growing
plants. There is a lot of variation and experimentation occurring.”
Schueller said automation in the plant factories will
probably occur with the planting practices before it happens with harvesting.
“In Japanese plant factories the finished plants are
brought to the harvesters,” he said. “There is automation to transfer the
plants. People are doing the harvesting of leafy greens, but they are brought
to the workers at an appropriate height and position so that they can be very
efficient and very productive. Obviously, if there are 14 layers of plants
under lights the plants are moved to the harvesters. But there is still some
human involvement in harvesting the plants.”
Schueller said an advantage to a plant factory is the
ability to precisely control the environment. “The technology is improving,” he
said. “The main improvement is with LED lighting. As LEDs become less expensive
and better that will help in the development of plant factories. Also, less
expensive sensors for measuring nutrient solutions are becoming available. As
growers gain more experience with this technology they get better at
controlling the production environment.”
Plant factory
economics

Schueller said economics play a big role in what will be
feasible in how these factories operate.

“The Japanese market for fresh fruits and vegetables is
much different than in the U.S. and Canada,” he said. “In the U.S. and Canada,
vegetables are cheaper. The market will not bear some of the costs that will be
accepted in Japan. In Japan consumers are willing to pay $40 for a watermelon.
“From an agricultural economic standpoint, it seems to me
the big advantage of a plant factory is that a grower can control the
production situation very well. The disadvantages are the energy costs for
running the artificial lights and the capital equipment costs. The best
opportunity is to produce a product that has certain characteristics, that has
no pesticides applied, that has no bacterial contamination, so that a grower
can demand a premium price for it.”
Schueller said one area of plant factory production that
shows great potential is being able to develop techniques that allow high end
vegetables to have nutritional characteristics that can be easily manipulated
more so than in other production environments.
“One of the Japanese plant factories that was built by
Fujitsu is growing lettuce which has a low potassium content,”
he said. “This lettuce is being produced for kidney dialysis patients and
people with chronic kidney disease. This type of crop has a lot of potential
for U.S. and Canadian markets. Developing vegetables that have nutritional
characteristics so that the markets will be able to tolerate higher production
costs that are associated with plant factories.”
Schueller said the plant factories in Japan can produce
leafy green vegetables in about 15 days.
“The production cycle needs to be as short as possible,”
he said. “If a plant factory is controlled properly and maintains sanitary
conditions, it is possible to produce leafy green vegetables with specific
nutrient characteristics without pesticides. For those types of crops a grower
can demand a premium price to pay for the equipment and energy to produce
them.”
Fast, precise
production

“I expect these crops would have the greatest potential
in the U.S. as well,” he said. “As more consumers move away from iceberg
lettuce and romaine lettuce, they tend to look for other types of lettuce and
leafy greens and microgreens. There might be real potential with these crops
because they can usually be turned much more quickly.”
Schueller said some of the issues pushing plant factories
in Asia are related to domestic food production and land availability.
“Japan imports almost 60 percent of its food,” he said.
“For the Japanese it’s an issue of food security. Singapore has increased its
vegetable consumption from 7 percent to 8 percent. In Singapore there is a
limited amount of land. They are looking for ways to maximize food production
and plant factories offer them a solution. With plant factories that have
vertical farming they can push the production to maximize the space. In the
U.S. that isn’t a big concern. The plant factories in the U.S. that will be
successful are the ones that grow products that are difficult to produce using
conventional methods.”

For more: John
Schueller, University of Florida, Departments of Mechanical and Aerospace and Agricultural
and Biological Engineering; (352) 392-0822; schuejk@ufl.edu.