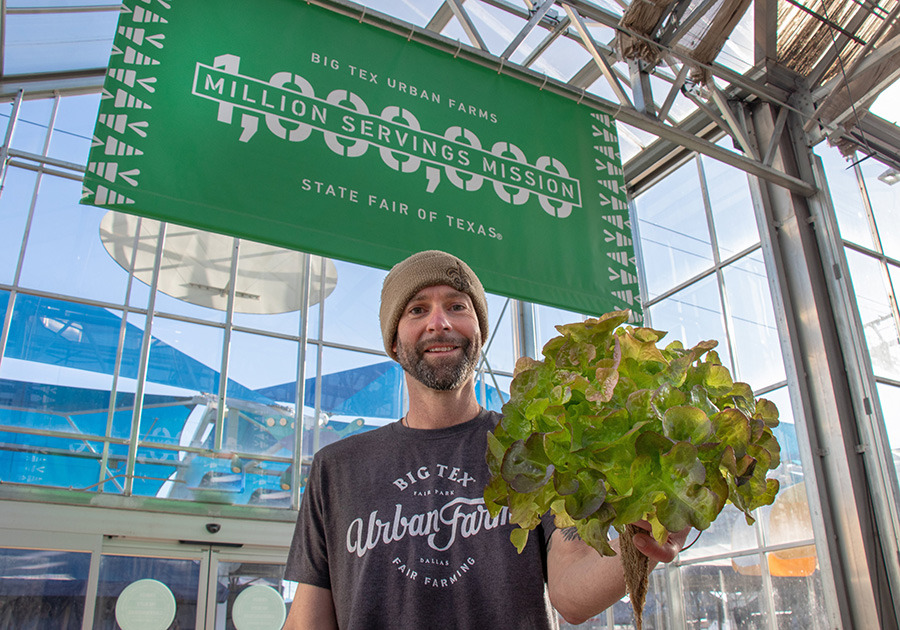 Big Tex Urban Farms and Hort Americas have partnered together to install, test and demonstrate a variety of hydroponic production systems while at the same time providing Dallas community organizations with locally-grown produce.

What started as an outdoor gardening project by the State Fair of Texas to better serve the local South Dallas community has surpassed what fair officials ever imagined might be accomplished. Jason Hayes, who is the fair’s creative director, and Drew Demler, who is the fair’s director of horticulture, devised a plan to start an outdoor vegetable garden in unused parking space.

“Big Tex Urban Farms started with a small budget in 2016 using 100 mobile planter boxes to grow food outdoors,” Demler said. “During that first year we got some decent yields. The food that we harvested was donated to two local charitable organizations.

“Baylor Scott & White Health and Wellness Institute in Mill City, Texas, is our primary beneficiary. The institute hosts a farmers market for the community on Tuesday and Friday. One of the institute’s main objectives is to get people eating healthy, fresh vegetables. We donate vegetables, including lettuce, collard greens, Swiss chard, basil and chives, and they in turn give the produce away. This is in a community where there really aren’t many other good options for fresh produce.”

Another local beneficiary of the fresh produce grown by Demler and his staff is Cornerstone Baptist Church. The church feeds the homeless six days a week.

“The church is involved with feeding the people who need food more than anyone,” Demler said. “The church had been receiving donated produce that was declined by area grocery stores. The homeless weren’t receiving anything that would be considered fresh and they weren’t receiving any greens or lettuces at all. We have been able to change that. A lot of what we donate to the church are leafy greens.

“We harvest our produce fresh the morning that we donate it. We probably don’t go more than 4 miles from our facility to any one organization. This is about as local as they are going to get unless they are growing it themselves.”

Demler said growing and donating fresh vegetables gave him and his staff an opportunity to develop good relationships with the organizations they were assisting.

“These local organizations were very happy with what we were doing to assist them in their efforts to feed people in the community that really needed help,” Demler said. “We also received some good media coverage which helped generate more interest in what we were doing.”

Because of the positive response from the groups being helped and some good media coverage, the budget for Big Tex Urban Farms was increased considerably in 2017. This enabled Demler to expand outdoor production to 529 outdoor planters.

“Also before the fair started in late September we installed a 30- by 15-foot hydroponic deep water culture tank in one corner of our largest 7,200-square-foot greenhouse,” Demler said. “We also installed six 8-foot tall vertical tower gardens. This was our first venture into hydroponic growing.”

The greenhouse had been used to grow ornamental plants including palm trees and bougainvillea, and to overwinter hanging baskets. It was also used as a plant exhibit room during the fair. Demler worked with the staff at Hort Americas to design and install the hydroponic production systems.

The amount of produce that was harvested from the hydroponic systems immediately got Demler’s attention.

“In the short amount of time that we had installed the systems and started growing, we were very impressed with the results,” he said. “Our total production indoors and outdoors in 2017 was around 2,800 pounds of produce. By the end of April 2018 we had exceeded what we produced for all of 2017. This was one of the main reasons that we decided to expand our hydroponic systems. It is such a better and more efficient way to grow.

In September 2018 the State Fair of Texas announced it was implementing a Million Servings Mission. The mission was the brainchild of Jason Hayes.

“The main purpose of the mission was to create awareness,” Demler said. “Jason thought the mission was a really good way to raise awareness about the issues facing the residents of South Dallas and what Big Tex Urban Farms is trying to accomplish. Once Big Tex Urban Farms started producing crops hydroponically we were able to greatly expand our distribution. Even in 2019 we have been able to expand even further our food distribution efforts with the addition of the hydroponic production systems we are now using. Working with Hort Americas has enabled us to further our reach in regards to producing more food and assisting additional organizations. One of mission’s points is to give us the impetus to continue to grow figuratively and literally with the produce that we are able to donate.”

To measure achievement of the Million Servings Mission Big Tex Urban Farms calculates all of the produce that it donates.

“I weigh the vegetables and then send the pounds per variety that we donate to Jason. He keeps a spreadsheet and using a formula created by USDA converts pounds of vegetables into servings. We can actually determine relatively accurately how many servings of vegetables we have produced since we geared up our hydroponic production in 2018 and now into 2019.”

Much of the equipment that has been installed in the Big Tex Urban Farms greenhouse was previously used in Hort Americas’ demonstration and research greenhouse in Dallas.

“Hort Americas has changed its focus from having its own demonstration greenhouse to putting our energy and resources behind making Big Tex Urban Farms successful,” said Chris Higgins, general manager at Hort Americas. “Hort Americas is providing human resources and grower knowledge along with access to innovative technology. The biggest thing that we are doing is teaching the Big Tex Urban Farms employees how to grow hydroponically. Hort Americas is sending staff to the greenhouse weekly to provide oversight, perform actual tasks and to collect data.

“Right now the facility has been equipped with 75-80 percent of the equipment that is needed in order to grow the crops hydroponically that they want to grow. There will be additional equipment installed as the budget allows.”

“Matt White helped us build our first deep water culture tank,” Demler said. “Matt also designed all of our lighting systems. He has provided us with technical assistance as we have expanded our hydroponic production systems.

“Diedre Hughes visits us weekly. She helps us log data, organize projects and assists us with whatever we need. This kind of technical support has enabled us to advance our food production at a much faster rate and we are very grateful for it.”

A variety of hydroponic systems, equipment

Big Tex Urban Farms has installed a second larger deep water culture system. It has also added three rows of Dutch buckets that are being used to grow tomatoes and bell peppers.

“We’ve also added a nutrient film technique (NFT) system,” Demler said. “The NFT channels were donated by Hort Americas and I built a simple system based on a couple of designs that I had seen including ones that Hort Americas was using. We are in the process of adding a second larger NFT system, which is going to be bigger and more productive. This second system was being used by Hort Americas in its demo greenhouse.

“We want to see which crops grow best in the NFT system. We will definitely do more lettuce. We will probably grow some herbs. I’m planning to do more of the cut-and-come-again greens, including collards, kale and mustard greens. These are crops that community residents are very familiar with.”

When Big Tex Urban Farms began growing hydroponically it started with one stainless steel GrowRack system for vertical production. It has since added three additional GrowRacks.

“The first GrowRack we installed has always been used for plant propagation to start all our seedling plugs that are transplanted into our hydroponic production systems,” Demler said. “The additional GrowRacks have been used for finishing different crops. The racks are very versatile. Right now we are using them to finish heads of lettuce. We can also grow herbs in them. During the run of last year’s fair we used the racks to produce microgreens and we’re still growing a small amount of microgreens in them.”

“The Moleaer generator made a big difference throughout the summer,” Demler said. “We didn’t start producing out of the second pond until the summer. We really needed a system to oxygenate the water during the warm summer temperatures. It made a huge difference in the crops. We were able to do a great comparison in plant growth with and without the Moleaer generator. Our first deep water culture system is oxygenated with a Venturi. It was very difficult for us to harvest a crop out of the first deep water system because the roots of the lettuce would bunch up at the surface of the pond because there is less oxygen in the water. With the Moleaer generator we were consistently able to harvest lettuce.

“This summer we are going to be able to get a really good comparison because we were able to install GE LED top lights over the second pond right before the start of last year’s fair. We are looking forward to seeing the difference in crop production because of the Moleaer generator and the new LEDs.”

“We are primarily using GE LEDs,” Demler said. “We have a few different versions of the GE Arize LEDs and we really like them. We also have a few OSRAM LED lamps.

“We are also going to be adding some new lighting systems. We may install some high pressure sodium lamps so that we can do trial comparisons with the LEDs. Hort Americas is also looking at a new LED that is nearly a one-to-one LED comparison to a high pressure sodium lamp. If those become available we will probably add those over some of our hydroponic systems and maybe over our existing vine crops which like high light intensities.”

Demler said he and the Big Tex Urban Farms staff are still trying to figure out the best way to use the hydroponic systems that have been installed.

“I’ve tried to ramp up production on the crops that I know are going to be popular and I know I can get people to start eating like lettuce, collard greens and the bunching greens,” he said. “I love to try new crops. We did bok choy last year in one of the deep water ponds. I even had some peppers growing in the deep water culture. We’ve grown different varieties of kale. I have also been thinking about other crops that we can try in the NFT system. If we add additional production space I’d like to try broccoli and beans.

“Strawberries are on Chris’ list to try. That’s a crop that he has put a lot of time and effort into. If he feels that it could be a viable crop for us, we’ll try growing them. We would like to try growing small fruit too. If we could make that work that would really get people’s attention.”

Hort Americas is supplying Big Tex Urban Farms with a variety of equipment and products that are being used with its hydroponic production to reach its Millions Servings Mission. The following is a list of the products and the crops they are being used with.

6. 30MHz sensors: All crops throughout the greenhouse